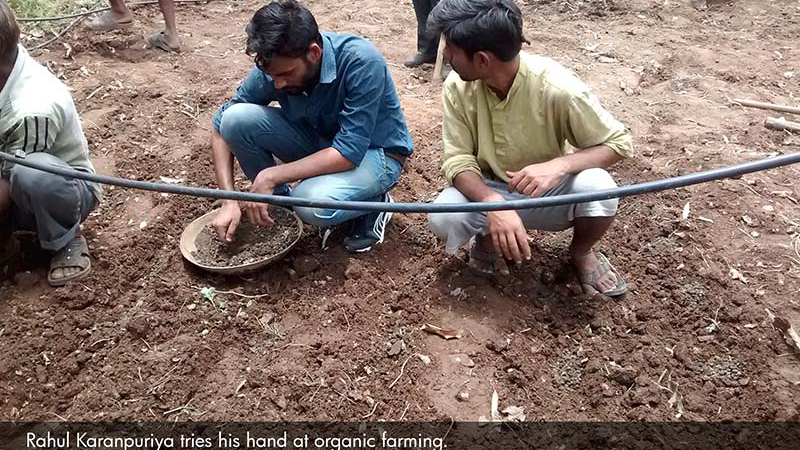 From a very young age, people are told to be conscious and compassionate towards the environment. However, in reality, there are very few people who actually follow this teaching. Through this project called 52 Parindey, I hope to share a series of stories about people who are leading a life full of consciousness and compassion towards the environment. With this aim in mind, I found my first story in Udaipur.

This story is about Rohit Jain. Rohit was born in a village but he received formal education in Udaipur and Pune, and went on to be trained in information technology (IT). During the course of his education, he felt deeply connected with issues of farmers, rural to urban migration, and the various difficulties faced by the people in Indian villages. After completing his education, Rohit was offered a job at a big company. However, he declined this offer and decided to spend a year to “find himself”. In that one year, he volunteered with several non-government organisations and found solutions to problems by understanding grassroots-level issues and the economic cycle of farmers. It was then that he developed a love for villages and villagers. Taking forward this love, he established Banyan Roots, which employs organic farming to fulfill the manure demands of the people.

During his college days, Rohit often saw farmers and other villagers, who had migrated to the city, living in filth in a slum behind his college. This forced him to question why were people leaving behind their clean villages for filthy localities in cities. In an effort to get answers to his questions, he started education children in the slum. It was there that he was able to delve deeper into the lives of migrants and understand their problems. He realised that in today’s market-driven economy, it was extremely difficult for farmers to lead a sustainable life, especially due to high debts. This, clubbed with the razzatazz nature of the city pulled these villagers to urban areas. However, they failed to understand that the “shining urban life” was like a mirage. It was only later they understood that not everything that shines is gold, and if they had to save their lives, they had to do something about it.

Rohit didn’t really have a plan in mind but his experience led him to a tribal village in north Gujarat where he lived and taught tribal children. This opportunity helped him discover himself and understand village life more deeply. Living there and eating traditionally grown organic food, he realised that the food in urban areas is very different from what is found in rural India. He believes that food hasn’t only lost its taste but its originality too. He also understood that the problem in villages is not of lack of education but of dwindling traditional knowledge. Today, traditional seeds and traditional methods of farming are on the brink of getting lost. Farmers’ disconnect from nature is leading to their poor plight. Rohit, thus, believes that this is an issue that needs to be addressed not just in rural areas but among urban citizens of India as well.

“These days, neither the farmer nor the nature is happy, and the consumers simply don’t know what they are eating.”
This is the reason Rohit decided to live with the locals and learn their practical and traditional knowledge of farming in an effort to preserve the same. He was then encouraged to develop a business model through which he could bring back the traditional seeds and traditional methods of farming into the mainstream. Rohit now dreams of making Udaipur a toxic-free city. For this purpose, consciousness towards environment is the key.

“Today, people have become very narrow minded, and they are living in oblivion. Based on my experiences, I believe, we have to first understand the challenges before our environment, and share stories or experiences with others to find the best possible solutions,” says Rohit.