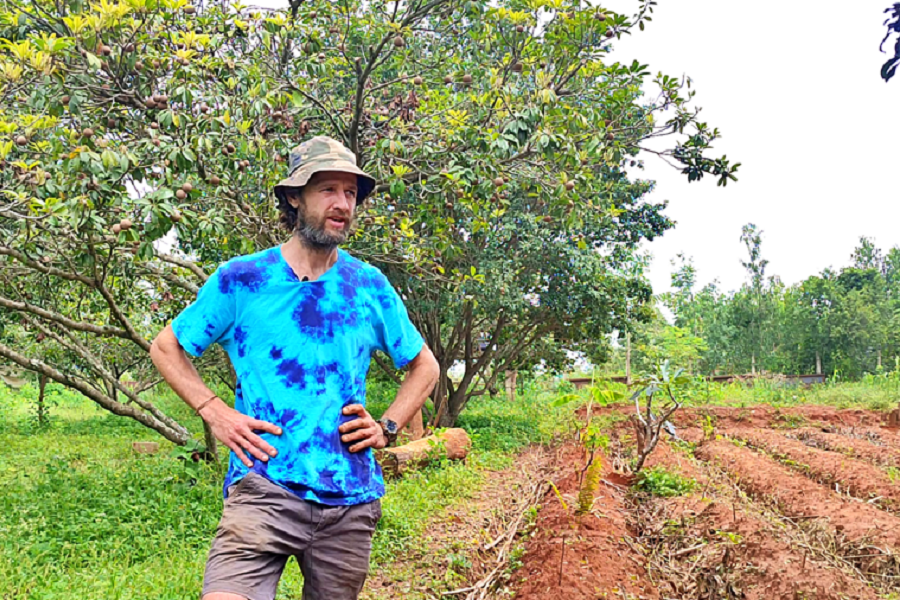 “I did not choose farming; farming chose me. That is just how my path unfolded. I came to Auroville and loved everything about it: the farmers, the food, and the farming. I was an environmentalist who wanted to do something environmentally responsible to change people’s approach to living—running in a rat race to earn more money and buy more cars. I wanted to change my way of life as well. It took me a while to accept that enabling people to consider getting their food from the ground, rather than from a store, can aid in changing their minds.” 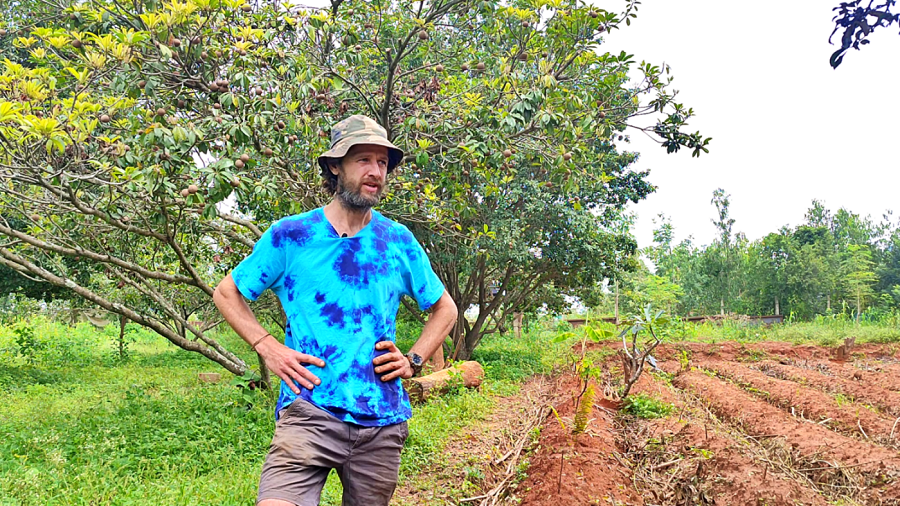 John Fennessy’s orchard–farm, Hamsah Organic Farm, is located within the city limits of Bengaluru, near Sulikunte village. Six cement-manufacturing industries surround this five-acre agroforest. This piece of land is a world apart from the rest of the place, which is one of the hotspots of cement production in Bengaluru.

A mixed natural orchard comprising mainly mango and chikoo (sapota), along with a few other species, occupies about two acres of the farm. In addition, vegetables such as potatoes, carrots, and different types of leafy vegetables are cultivated in different plots. Further, a distinct plot houses a nursery for raising saplings. Moreover, since 2019, John has been experimenting with syntropic agroforestry on a separate patch with the intention of transforming the farm into a healthy, regenerative agroforest at minimal cost and with almost no external inputs. Syntropic agroforestry combines food production with forest regeneration in a synergistic manner. This approach enables the restoration of degraded soil biodiversity, and the water requirement is less than that in conventional approaches. 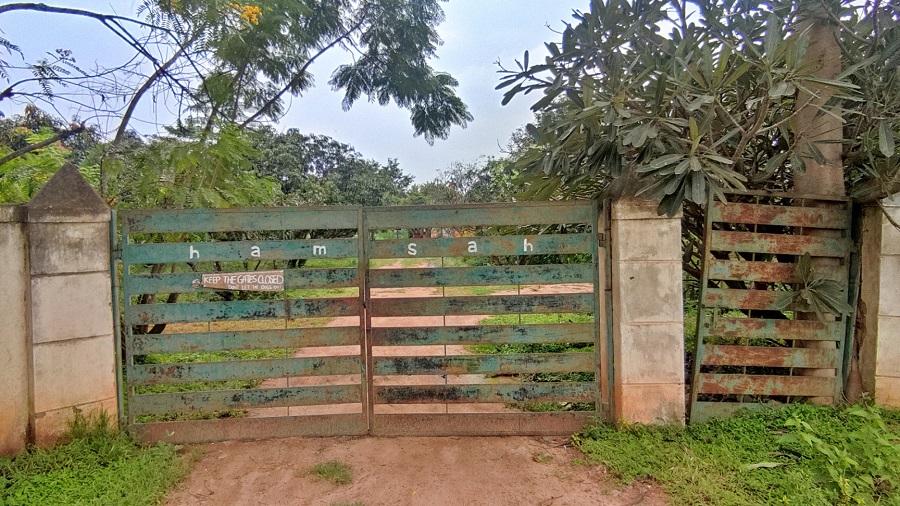 John was born in New York, USA, and lived the first 18 years of his life within the country. In 2001, he visited Nepal and Tibet for four weeks via a Tibetan monk’s summer programme. He found it to be an insightful experience and felt encouraged to visit India to experience its rich heritage and culture. Subsequently, he, along with 13 students, visited Auroville, India—a spiritual community devoted to humanity, unity, and ecological harmony—in the spring of 2003 as part of a university study programme. He fell in love with the place and the work being carried out there. After university, he returned to India and began living in Auroville. He lived in and worked at Krishna Mckenzie’s Solitude Farm, Auroville, for about five months. That is where an interest in farming was sown in his heart. He found it to be a beautiful way of life. Furthermore, it was at this farm that he met and fell in love with his wife, Swetha. After their marriage, they moved to California and took up jobs. They lived in the USA for two years and gained financial stability. However, the wish to move to India always remained at the back of John’s mind; they eventually relocated to India in 2008 without a rigid plan. Swetha engaged herself in architectural projects, while John considered moving to Auroville to take up farming. That was when John’s brother-in-law offered him a five-acre plot in Bengaluru, which was slowly transformed into the Hamsah Organic Farm we see today. 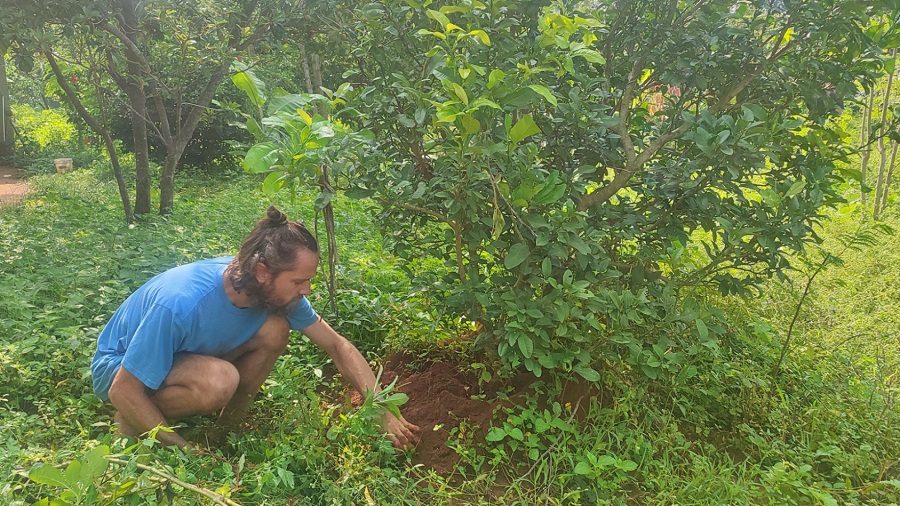 From the beginning, John had carried out the majority of the work on the farm with the assistance of occasional workers, volunteers, and visitors. Each visitor had pitched in to help John with whatever he was working on. “It has been an amazing 13 years here, and I am quite happy with how things have progressed,” says John, discussing his journey. “Now, I am farming full time, preparing new beds, growing more vegetables and fruits, and producing food for myself and the visitors,” he explains.

Hamsah is a pleasant space for casual visitors and families to spend their weekends at. While staying at the farm, visitors enjoy eating naturally grown food and fire-cooked pizzas and go on farm walks with John. “It is a place to calm ourselves down after a hectic week in the noisy world,” says one of the visitors, with a smile.

Water scarcity during the summer is a major challenge in the farm, which is further aggravated by the presence of cement-manufacturing factories that consume large amounts of water. Further, fly ash from these factories is carried to the farm by winds, forming a layer on top of the soil and polluting it. When John began experimenting with syntropic agroforestry in 2019 on one patch of the farm, he found that this approach served as a solution to these issues as well. This type of agroforestry involves extensive mulching and the co-cultivation of fruit trees and vegetable and grain crops. John uses organic residual material (e.g., coconut shells, dry leaves, and sticks) and green manure plants (e.g., Gliricidia) as mulch. This mulch decomposes to form manure, thereby enriching the soil and benefiting food production. Further, this layer of mulch retains water for long durations, thereby compensating for the water scarcity. Additionally, the fruit trees act as barriers to the fly ash from the factories and protect the soil from pollution. John feels that practicing syntropic agroforestry teaches farmers to stop fighting nature and learn to embrace it instead. In between fast-growing trees such as mango, litchi, and chikoo; vegetables, flowering plants, and grains can be found in John’s expanding agroforest. For instance, Mexican sunflower, pineapple, and papaya are grown in the same row. Further, the yield and quality of the potatoes and carrots grown in the farm this year have been the best so far, and John is very pleased with this accomplishment. Hence, he has prepared more beds and intends to grow okra, corn, basil, tomato, cauliflower, chilli, and brinjal together in these patches. “This is going to be incredible!” feels John. 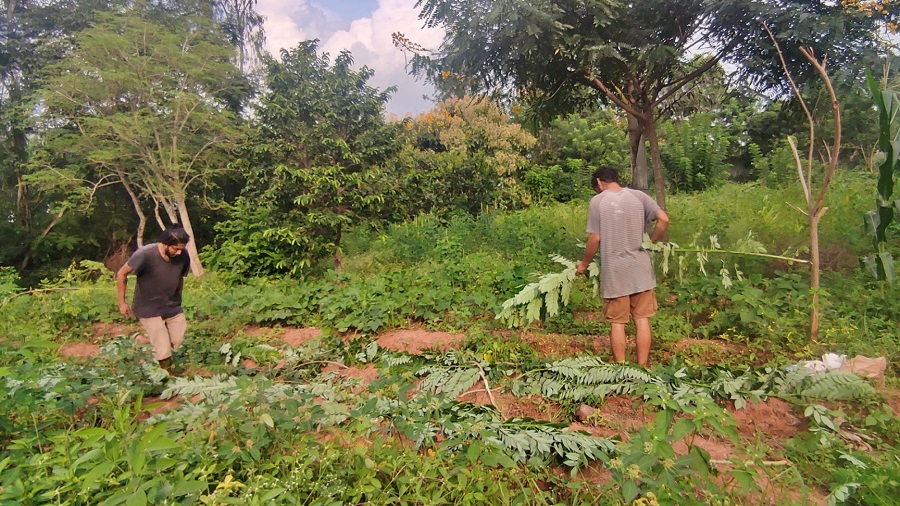 Several of John’s farming friends have suggested that hosting and facilitating workshops is the best way to increase revenue while enabling the initiation of more people into farming to create a stronger community around him. However, John is yet to facilitate one even with 13 years of farming experience. He does not think of himself as a good orator or someone who can handhold and teach people. “I am leaning toward offering workshops, but I also like how I am living my life. I do not aspire to save the world through farming; it is primarily for my children: the next generation. To me, the world appears to be doomed but we can make a good corner in it. That is exactly what I am doing. I made a nice corner. I am just trying to improve the beauty of these five acres,” explains John.

John claims that as a foreigner living in India, he does not understand the politics and other such nuances here, which limits his ability to interact with more people in the community. However, despite the challenges he has faced, John feels that it has been a rewarding experience. “The most rewarding aspect is having land of unlimited potential and deriving an income with almost no investment,” says John. There are two cows, two swans, and chickens on the farm. The cows produce milk, and their urine and dung are used as manure for the farm.

Although John began farming on this land in 2008, he travelled to the USA several times in between to take up other jobs. However, he found himself returning to his farm each time, saying “I am doing this because there is nothing else my heart would be happy with.” Now, John believes that he is truly here in a syntropic agroforestry sense. He does not wish to just be an instructor who employs a large number of people to farm. “I want to be a leader by being present on the ground,” asserts John.

Hamsah instils both hope and inspiration, with one person doing what he can to make a difference.

John can be reached at: hamsahorganic@gmail.com 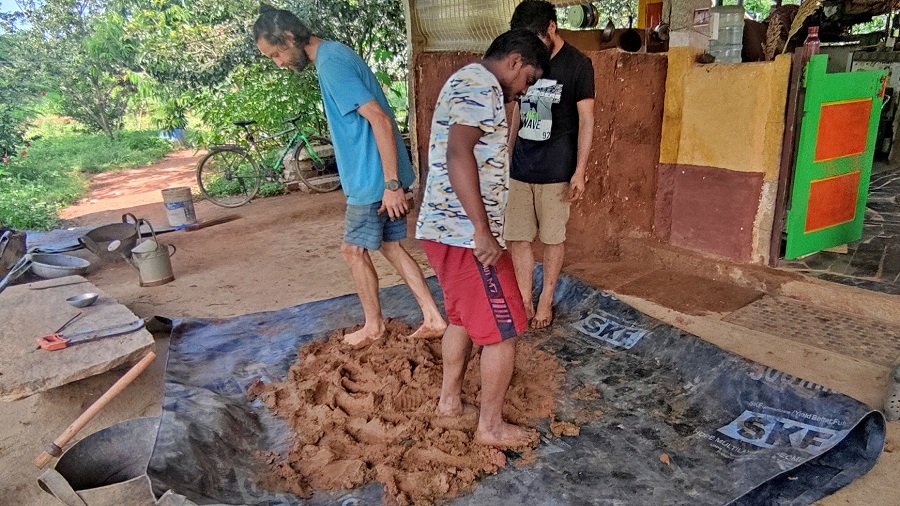 Teaser/SEO description: Growing a healthy food forest in Bengaluru: Hamsah Organic Farm, a beacon of hope and inspiration amid a concrete world.