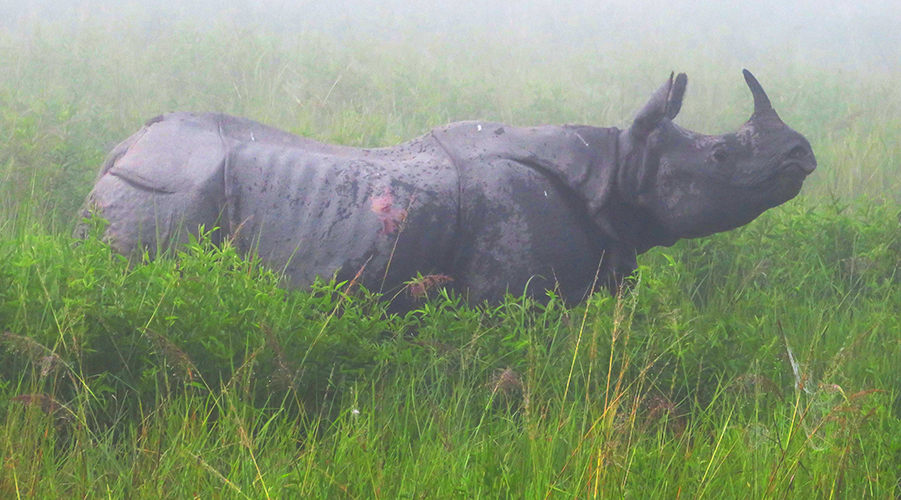 Our latest parindey is a daughter-father duo, Nisha Bora and Mahesh Chandra Bora, who make paper. The USP of this paper is that it is made from the poop of rhinoceroses and elephants — so yes, eco-friendly.

So what motivated them to start this enterprise? The vision to preserve one-horned Asian rhinos!

Eighty per cent of the world’s one-horned rhinos are found in the north-eastern Indian state of Assam, where unfortunately the numbers of rhinos are dropping drastically. Besides the environmental reasons of changes to their original habitat, there are several other reasons for their diminishing numbers. For instance, farmers, to protect their crops from being destroyed by stray rhinos, kill this large mammal. Then there is a big black market for rhino horns; and so they are illegally hunted and killed for their horns which are sold for anywhere between Rs. 40 lakh to 70 lakh per kilogramme. Then, there are.

Mahesh is a retired coal mining engineer. This paper producing journey for Mahesh started in 2009. He was returning to Guwahati from Delhi when he read an article about a Rajasthan-based woman who was using elephant’s poop to make paper.

“I thought why not do something like this in Assam? When this lady can start this initiative in Rajasthan, a region which is not known for elephants’ presence, why not Assam where there are plenty of elephants. Maybe we could also include rhinos’ excreta and, eventually, help save them,” recalls Mahesh.

And so Mahesh decided to go to Rajasthan to learn how to paper from poop. When he returned to Guwahati, he established an enterprise called Elrhino. Today, this enterprise provides employment to at least 15 people directly and another 150 people indirectly in and around the villages of Guwahati.

For having achieved this (livelihood of hundreds of people and protection of rhinoceroses), Mahesh gives the credit to his daughter Nisha. Nisha stood by him as a pillar of support when Mahesh was struggling to start Elrhino. Over the years, Nisha has taken over the business and is leading its success story.

“When my father was laying the foundation of Elrhino, almost all our well-wishers were discouraging us from starting this enterprise. They were all of the view that it’ll be nothing more than a waste of time and money. But papa had faith in his plan,” says Nisha. “I was working in Mumbai, Maharashtra, at that time. That was also a time when I was trying to figure out what I wanted to do in life. I wanted to do something different, something new, something interesting and something challenging. Whenever I came home, I used to be inspired by my father’s dedication and his initiative; and so I decided to join him in his enterprise.”

After Nisha quit her corporate career in Mumbai and took the reins of Elrhino in her hands in Guwahati, she didn’t know that Elrhino would end up becoming a successful and popular brand name. It wasn’t her intention to make it a big brand name either. She just wanted to preserve the rhinos in the region by involving the local community; and subsequently providing the latter with letter livelihood options.

Nisha says, “Today, Elrhino has become a brand name which is being recognised world over. So many people are inspired by us every day and want to be associated with us. They encourage us to continue our initiative. But let me tell you, it hasn’t been an easy journey. We started producing paper with the thought that we’ll be able to sell them and make our voice (call for saving rhinos) reach more and more people through our products. However, we soon realised there was no market for our paper. So we had to come up with a new strategy; and we decided to make paper-based products rather than just paper.”

Elrhino products now range from lampshades and pen stands to diaries and even playing cards. They made their products reach a wider customer base through stalls at trade fairs, exhibitions and other such events or venues. Additionally, their outreach programme focused a lot on social media to reach out to the young population spread not just across India but around the world. The result was — not just did their work reach a global customer base but they also received appreciation for their efforts from various parts of the world. Elrhino has also been awarded with the 2015-2016 National Award for Best PMEGP Export-Oriented Unit under the Khadi & Village Industries Commission of the Indian government.

Elrhino doesn’t depend on the national parks for its raw material. Instead, it sources it through villagers and farmers. This way, it is able to contribute to a rural household’s income, educate them about the need to preserve forest life and directly involve the community in the efforts of saving the rhinos.

By sticking to the core values of Elrhino, Mahesh and Nisha don’t want to enter a zone of competition with other paper producers. Their priority is to provide employment to the local community, save the rhinos, create awareness among customers and ensure that their customers know how their money is being utilised by the enterprise. And the results have been encouraging; more and more local people want to join their initiative in some way or the other while people from different parts of the world want to buy Elrhino products. Nisha and Mahesh’s vision now is to involve more and more villages in and around the region to come together for the preservation of rhinos.