Creating a direct link between farmers and consumers 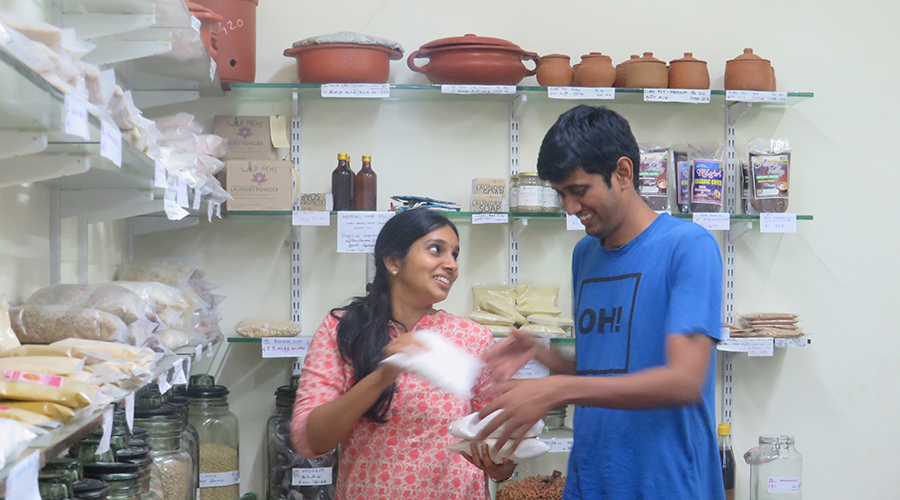 Prior to the Green Revolution, there was no such thing as organic or inorganic food. That divide only came after the Green Revolution was introduced and pesticides were given to our farmers with the message that it will prevent the decay of crops and promote faster and better harvest — therefore more money for the farmers. On the other hand, the common man in cities was told that if India wants to become self-dependent in the area of food production, the use of chemicals is important. It’s been more than 50 years since the Green Revolution now, yet our pulses are being grown in Africa. Farmer suicides which used to be rare back then are what fill newspaper columns.We could not become self-dependent on food, and we could not even stop the shocking growth in the number of people who sleep empty stomach every night. However, industrial households have only become richer and richer.

Unfortunately, the common man is hardly affected by questions like: Why are farmers committing suicides? How did Ambanis and Adanis become so rich? Why do you we import pulses and other grains? What is the effect of all these things on animals and plants? However, when they learn about the consequences of these pesticides on their health, they start thinking about it. So now, for the first time in 50 years, the common man has become a part of the dialogue on this issue.
Our parindey from Chennai started their journey with this realisation. Parthasarathy and Rekha, as our society would demand, were living a happily married life. Both were holding respectable positions in multi-national companies.

Along with their high-paying jobs, they had all modern facilities around them. After working hard for 10-12 hours every day, they had begun to spend money on those items that advertisements on their television sets told them to buy, irrespective of whether or not they actually had a requirement for those products.

Their life took a new course when one of their family members fell prey to several diseases. The couple started questioning the meaning of having all such modern facilities — that an average Indian household wants — yet being pushed towards health-related hardships. This thought added a temporary pause to their lives; and the couple began to read several books on the issue. During their research, they learnt that most of the diseases have a direct or indirect link to the pesticide-sprayed food people eat. The rest of the diseases are a consequence of the modern lifestyle. Parthasarathyi and Rekha realised that they needed to change their lifestyle. Slowly but steadily, they began to take baby steps in a new direction. But their life finally reached a milestone when they read a report by the World Health Organisation (WHO) which stated that, in Chennai, poisonous content had been found in mother’s milk (due to pesticides used on the food that the mother consumes). That’s when the couple understood that if they don’t do anything about it right away, it might be too late.

Parthasarathy says, “From our research, we found that most of us are completely unaware of how pesticides are affecting our body. The following information was issued by the government of Canada, which informed its citizens how pesticides were affection their health.”

“When we read this table, we made it a point to consume only organic food. Rekha and my families come from agriculture backgrounds. When we were young, most of our food came from our own fields. And so we decided to visit our families and encourage them to grow organic food but they weren’t ready to believe that organic farming can be carried out in a sustainable manner. We understood the impact of the Green Revolution on our farming community. Our traditional farmers had forgotten their traditional knowledge and its advantages. We, however, did not lose hope. When we refused to back down, our families gave us a small piece of land and asked us to show them what we can do with it. We took the land as a challenge and opportunity to prove ourselves right. We used the traditional Indian methods of farming and innovated a multi-cropping technique to replace the mono crop system,” he adds.

During that phase, many people from nearby villages came to tell Parthasarathy and Rekha that their attempt would not be successful. It will only cost them money and time. However, the harvest surprised everyone. When the old women in the village ate the vegetables that the couple had grown organically, the former exclaimed that they had not tasted such vegetables in over 20 years.

“That comment was enough to encourage us even more. However, when we asked the villagers if they would now want to adopt organic farming, their answer was still no. The reason for this was — in today’s age, farmers are more concerned about selling food than eating food. They were scared that organic farming techniques would reduce the output. And so we took it as a yet another challenge. This time, we decided to grow the same seeds the farmers were growing, but used only organic methods of farming. The village was once again shocked with the results,” Parthasarathy added.

While the entire village was able to produce 28 sacks of grains in a one-acre land, Parthasarathy and Rekha had grown 36 sacks of grains on just one small piece of land. That was the day and today, when 100 acres of land is used for producing organic crops in and around the village.

The couple’s journey, however, did not end there. There was a new challenge facing them — to sell their produce at a reasonable price in the market. This mission took them to ReStore in Chennai, our last parinda Sangeetha Sriram’s organic store, which had been set up with a similar vision. During a discussion on this topic, the idea of OFM (Organic Farmers’ Market) was conceptualised. Through this platform, a group of individuals collected some money, and used it to buy grains and vegetables directly from the farmers and sell it to consumers in Chennai. The success of this initiative can be gauged from the fact that OFM has 16 retail outlets in Chennai. Further, almost every day, Parthasarathy and Rekha meet young individuals who want to leave their corporate life and associate themselves with OFM.

The beauty of this entire project is that it is a collective, community-driven and democratic initiative. The community understood its problems and then found solutions on its own to overcome the challenges instead of being dependent on a government, a politician or a “savior” for change. OFM is an initiative of the people, for the people and by the people. A model like this hits our pseudo democracy real hard, and it’s visible when people in big cities try to start initiatives like these. I hope that in near future, people in smaller cities, too, will come out to support and work with farmers to find sustainable solutions for them.