A peaceful warrior in search of Chi 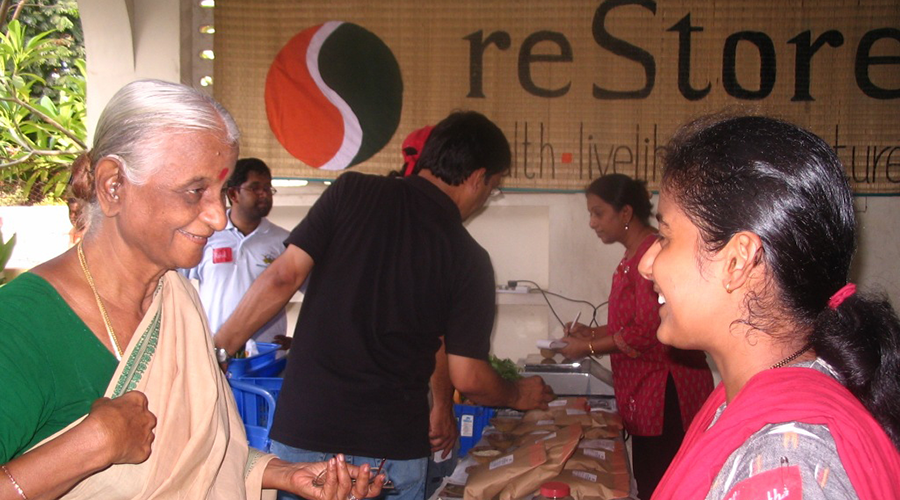 She is a writer, activist, entrepreneur, educationist, facilitator, gardener, singer and artist. She is also a mother. But she likes to call herself a traveller. A traveller who is constantly learning from her experiences and looking for answers to the questions that emerge from her journey; thereby walking on a path which may not have any clear destination but has a number of milestones, one after another.

The person I am talking about is my latest parinda, Sangeetha Sriram I call her a Peaceful Warrior.

Having spent half her life in Chennai, Sangeetha is now on a journey to search for ways in which she can add colour to her life and maintain its sanctity and simplicity. Writing her story has been the most difficult task for me in this journey so far; and I don’t know if I will be able to do justice to her story.

At a first glance, it seems as if her life is divided into two parts which though seem to be walking hand-in-hand, actually are reflections of each other. Her story or her struggle — whatever you want to call it — started as soon as she was born into this patriarchal world. When she was a little older, Sangeetha had realised that a girl is given only limited freedom, a freedom which is already chained. In the name of a ‘free society, people “allow” education for women but then impose several restrictions and the burdens of expectations. As part of a conservative society, women are made to believe that they need to excel at all the household chores and be home before sunset. This seems to be the underlining learning of all the education that men allow girls and women. These and hundred other conservative beliefs restrict the development of women. These restrictions are burdened on the shoulders of young women who begin to feel suffocated in our society. Consequently, they start becoming rebellious. Actually, that rebellious nature is the start of finding themselves.

During her rebellious phase, Sangeetha joined the National Service Scheme (NSS) in college and worked on various social issues and tasks. She thought that NSS was something nobody would object to, even if not encouraged or celebrated. Through her association with the NSS, Sangeetha learnt about environment problems that the people are facing in urban areas. To understand these issues in depth, she read several books. After her graduation, she even worked for three years with an organisation on urban issues like waste management, children’s awareness towards environment and water pollution, among others. Following this period of three years, Sangeetha got an opportunity to go to the US for a six-month youth programme. There, she studied and worked on ecosystem restoration. It was during this time that she fully realised the consequences of globalisation on the environment, and participated in several protests against the same.

“Participating in these protests and the struggle for them was a reflection of my internal struggle from all the restrictions and expectations my culture had on me,” recalls Sangeetha.

After returning from the US, she traveled for six months to various rural and tribal areas across India to understand the ground realities. For a while, she closely worked with a Gandhian panchayat leader to implement Gram Swaraj in the villages of Tamil Nadu. Faced with disappointments within the movement, she started volunteering for the organic farming movement in Tamil Nadu. During the next few years, she took part in various environment struggles and movements. She also continued to work as a writer and editor for a few publications and as an NSS Convenor at IIT Chennai. Through her latter role, Sangeetha made youth aware about the grassroots-level problems. However, due to politics inherent in large government institutions, she had to soon resign from her post.

In 2006, Sangeetha’s life brought her at such a turn that she began to question the answers to various questions of life. After 10 long years of dedicated work in the areas of societal and environmental issues, Sangeetha fell ill, both mentally and physically. A severe clinical depression that completely shut her down physically and mentally.

“It had been a long, tiring journey rebelling my way out of a patriarchal society. Along with this, I had also tried to work in a lot of different organisations whose value system I didn’t resonate with. The consequence of both these was my deteriorating mental and physical health. This brought a turning point in my life. I began to take care and look after myself, I began to focus on the teachings of life, and I began to take baby steps forward. To form a close association with nature, I started gardening, which has now become my passion. A few years later, when I became a mother, I started to imbibe the natural methods of nurturing children. I now look at life with a closer perspective. It helps me stay in touch with my inner self. A year ago, when I moved from Chennai to Thiruvannamalai, I started dreaming of a nurturing community of co-journeyers who want to look at spirituality and sustainability together and took some baby steps towards co-creating it. It is now slowly and steadily growing in beauty and size. says Sangeetha.

“My life is full of questions. It is because of these questions that I have reached where I am today. These questions have taught me a lot. Their answers leave a new question for me every time, and push me towards a new search each time,” she adds.

It was in this journey of ‘search’ that, before moving to Thiruvannamali, she established a community place called ReStore in Chennai where people wishing to live a humble life can come together to share stories of their life. ReStore was actually started as a retail store for organic products but its objective was to create as much awareness as possible about grassroots issues. It was during this phase of her life that Sangeetha published her first book, a compilation of some of her articles.

In an effort to simplify her life, Sangeetha is still travelling; she’s still on a journey where she is working on ground issues but her nature of work or rather the method of work has changed. She now aspires to be a Sacred Activist (spiritual activist).

This is the story of a common woman who, in search of her existence, has come close to nature. Nature, too, is a woman and mother who gives birth, nurtures her children and loves her children.