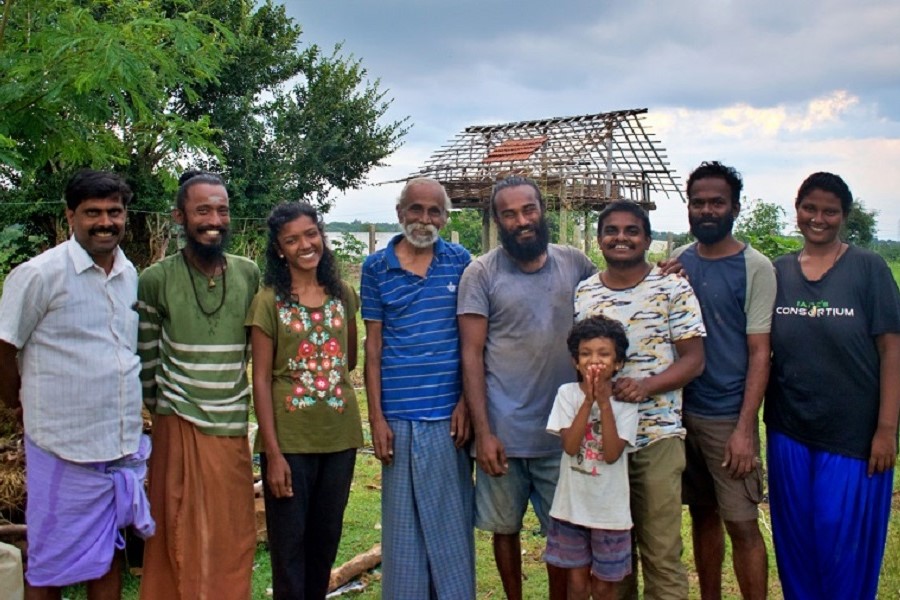 “The process is more important than the person doing it. I didn’t grow up in a farming community doing physical work. Being on a farm means being in the present. I don’t have a solid plan in mind, but I strongly believe there will be a time when I will understand the soil, the flow of wind and water, and what the plants need. I feel my life is more relevant right now and happier than ever. This satisfaction is more important than anything else. Whether I achieve something or make nothing is up to Nature.” – Caxton Christdhas 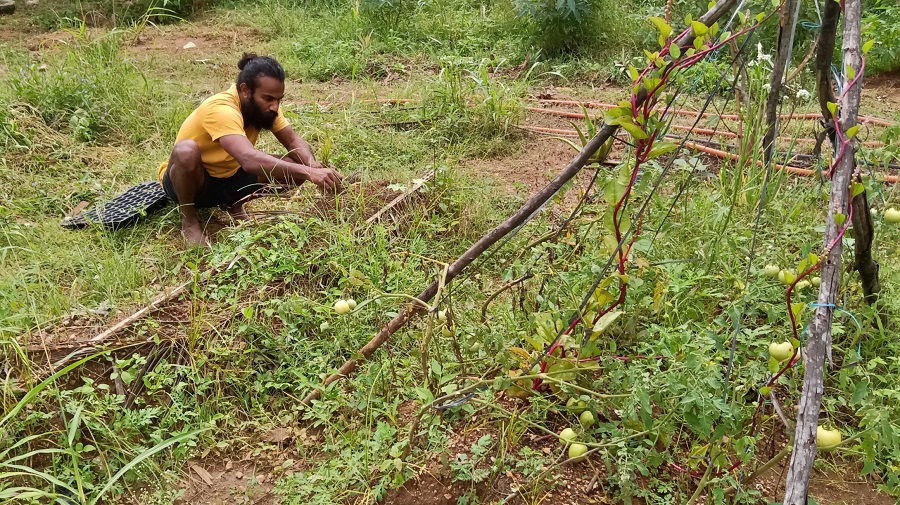 Caxton Christdhas grew up in a middle-class family in Azhagappapuram village near Kanyakumari. Like most kids of his age, he thought the village was backward and longed to move to a city to experience urban life. He moved to Chennai in search of urban life and college education. He pursued Electronics and Communication engineering as he was curious about how the internet communicates with planes and rockets and wanted to work in that domain. During this time, he discovered that college was more like a school running in a monotonous fashion. Since there were limited possibilities for practical learning, engineering seemed difficult for him. Despite having attended college for four years, he eventually decided not to pursue a degree and instead began working. He began his career in a BPO, then got into training and later moved to a photography company.

After working in the corporate sector for a decade, a variety of questions related to centralised systems of finance, governance, politics, and food kept daunting him. He held a senior managerial position and received a huge salary which he believed he did not merit. He tried to get better wages for grassroots workers as he felt they truly deserved it for their contributions, but he failed. He became certain that he did not belong to the corporate world and found nothing rational in his way of living. He quit the job in 2015 in search of a new direction. To understand his purpose and execute it in a practical sense, he travelled across Tamil Nadu to meet interesting people around him who were doing things differently. In this process, he got associated with a group of youngsters who were working to address civic issues around them, such as restoring water bodies, running signature campaigns for public sanitary infrastructure, planting native trees, conducting children’s camps, workshops, farmer’s markets, book readings, etc.

Later some of them also created a space in Chennai, Tamil Nadu, to host activities such as storytelling, puppet shows, and workshops exclusively for children. During this time, he also collaborated with his friend Perumal to launch “Patham” in 2017 in Tambaram. Patham was probably the first of its kind, a store that sold sweets made only of karupatti (palm jaggery). They attended a number of events attempting to raise awareness about food and its association with water and electricity. Patham now has a store in Madurai and continues selling healthy sweets and snacks made from native millets and palm jaggery.

Even though he was indulging in more meaningful endeavours, he was still looking out for things that would make him happy. He felt compelled to do something in tune with the rest of nature. Through his experience with diverse groups and spaces, he eventually realised that humanity’s current existence is not a harmonious one. He felt that we are collectively travelling towards a more complicated and difficult lifestyle. He realised that there are, undoubtedly, easier ways to live than the way humans are living today. This prompted him to envisage a conscious space where people on their exploratory journeys could come together to perceive things from a different perspective. 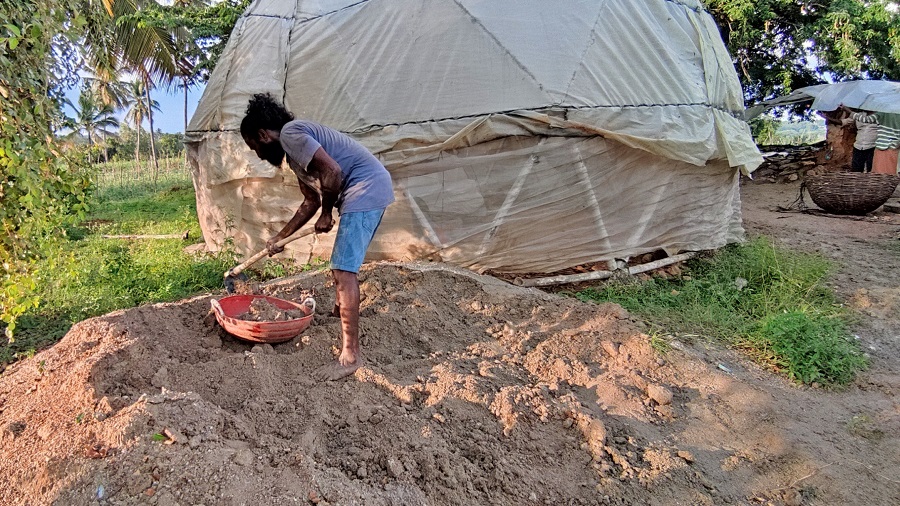 The Problem of Centralisation

The system determines what one should produce and consume. Caxton is concerned that the food system has gone horribly wrong, from production to supply chain to consumption. The Green Revolution has shattered our food diversity and thereby affected food sustainability, in the name of food security. It forced farmers to use land-abusive methods to produce food in larger quantities, leaving behind its quality and nutritional value. To add to this, trade has also become centralised. Meaning, the best of the produce is not available locally, making people reliant on the markets for their nutritional needs. And then, there’s the logistics and delivery methodologies, which amongst themselves account for 30% of the food wasted globally. Also there is consumption, where mindless indulgence has led to serious health crises and their fair share of food wastage. He does not want to be completely reliant on markets for food, and he hopes everyone would be more conscious of what they eat. He believes that decentralisation of food systems is essential for the long-term viability of any community, where most of the needs are satisfied locally. Growing one’s food is the beginning of the idea of decentralising food. If people choose to grow whatever they can in their surroundings, it will reduce their dependency. He also believes that there should be a shift from viewing food as a major source of income to food as the primary source of human sustenance. He is not looking for a well-defined model, but hopes to identify a sensible model for communities to be self-sufficient in their food and financial needs. Caxton believes in the democracy of food, where food systems are managed and run by the people, for the people.

“I have aspirations, desires, and wishes. More than that, there is a natural force that moves me.”

He wanted to do more than just be conscious of what he was eating. The desire to enjoy healthy and guilt-free food made him join hands with a few friends and start growing food on their own, in a small patch of land, based on the principles of natural farming. They consider it unnatural to not allow crops to grow on their own, based on the natural cycle. The farm is a practical learning space where different seeds are simply broadcasted in raised and flat beds to understand the course of the plants. Tomatoes and manathakalli (miracle fruit) grow in a raised bed three metres long. Leftover onions from the kitchen turn into fresh onion seedlings. Potatoes await their second harvest. Fenugreek seeds that fall to the ground stay tall like plants. Perennials that consume water, such as sugar cane and bananas, can be seen near the peripheral wash area. Greens are growing lush and happy in a corner and one can find diverse varieties of spinach ensconced by walls of brinjal, horse gram, and native corn. Soon there will be patches of rain-fed rice and millets. They are also building earthen shelters to host conscious learners and seekers. Along with that, they have started the preparation of compost with dry leaves and grass available on the farm. They are acting in the belief that crops grow themselves if they are allowed to take their natural course. This way of living, in their opinion, is truer than any other form of living. One should get what nature gives and be happy with it. They are striving to shift from the current abusive form of living and farming, to a more sustainable one. 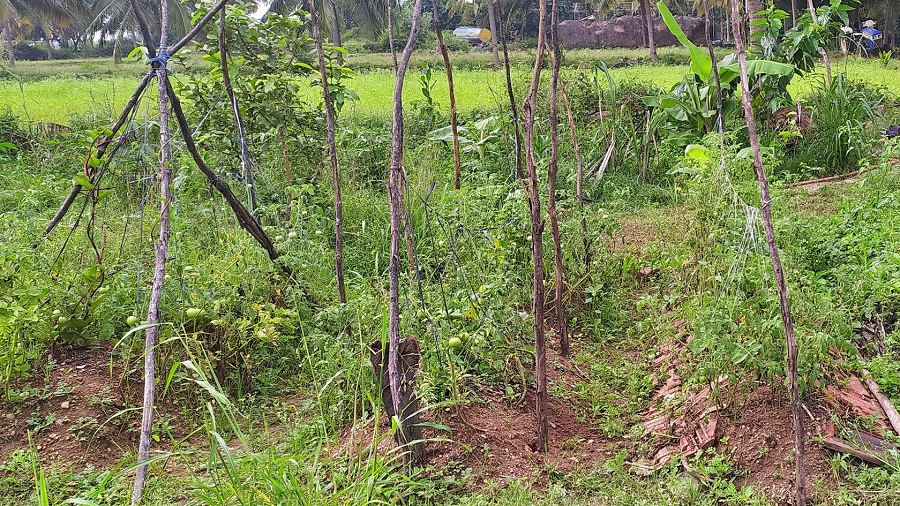 “Change should begin with me. I cannot just go to people and talk about what I want changed. I should do what I must be doing to bring about the change I want. I believe that actions manifest the change rather than words. All I know is to experiment. The beauty of an experiment is that it teaches either how to do something or how not to do something.

As a species, we don’t know anything for sure, and yet we behave as if we know everything. We may know the what and how of most things, but definitely not the why of anything that matters. This thought may seem absurd, but if I may put it into words, I can only describe it in this way,” Caxton adds.

Caxton can be reached at: caxton.christ@protonmail.com 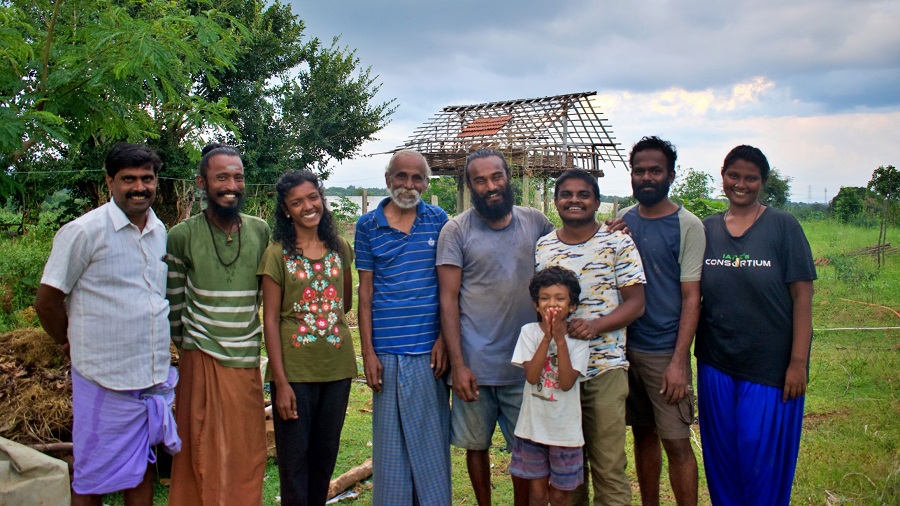 Anil with Caxton and the other humans of the farm