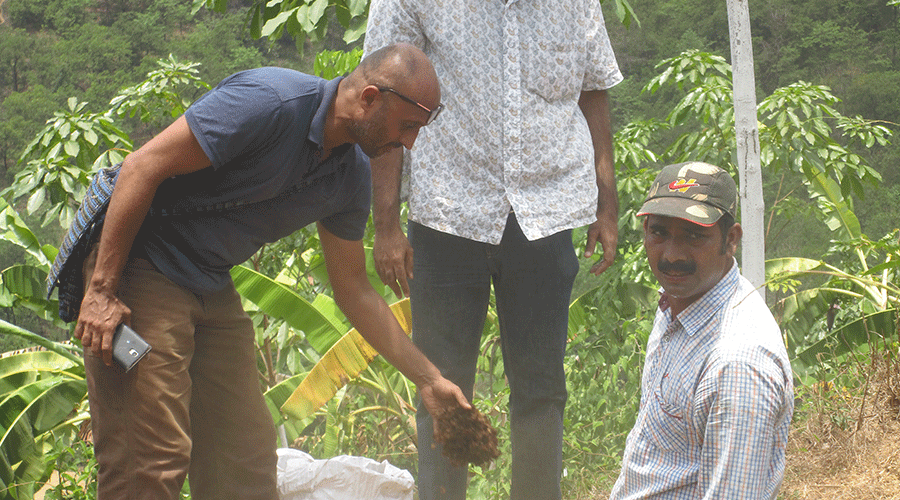 Like my last two stories about Sulochana Pendekar and Jill Ferguson, my latest parinda too brought me close to a major environment problem of waste caused by the modern-day society. While our last two parindey are trying to create more awareness around this problem of waste and its mismanagement, Parag Mody is working on turning waste into something that is useful for the planet and something that becomes a source of livelihood for people.

According to a report, India dumped 47 million tonne of organic waste in 2011, and every year, it contributes 11.3 per cent to this pile of dump.

While we are continuously told that plastic waste is one of the most harmful kinds of (non-degradable) waste, we aren’t told that if organic waste or food waste is not managed in a proper manner, it too can prove to be dangerous, as dangerous as plastic waste if not more. When organic waste comes in contact with earth, several chemical reactions take place due to which methane gas is released. So when such waste is dumped at an open site, the methane gas released becomes part of the atmosphere, thereby contributing to global warming.

After spending a week with Parag in Margao, Goa, I learnt how we can convert organic waste into something even more valuable than gold, and fulfill the many daily needs of mankind.

Actually speaking, Parag doesn’t “need” to do what he’s doing. He studied engineering in the US, and then established a business there. Being a Green Card holder, he could have spent the rest of his life with all the physical comfort in the US but he wasn’t satisfied. He felt that his education was not contributing to the welfare of society. So he shut down his business and started working with an NGO in California. While working with the NGO, Parag realised that he could do the same work in India. There were similar problems in India but different challenges. And so, Parag returned to India with his family and started working in Ahmedabad with unorganised labour and underage rag pickers.

“I was helping people but it wasn’t solving the bigger problem,” Parag said. There was no concrete solution coming out through his work, and there was no scope of innovation in what he was doing. However, his engineering mind was continuously encouraging him to do something new, to find solutions to people’s problems.

It was during this phase that he met a friend named Claude Alveres. Claude, for several years, had been working on mining-related problems in Goa, and invited Parag to stay in Goa for a while to understand the problems here. After arriving in Goa, Parag spent time understanding Goa’s ecosystem and the implications of modern development on it. Here, he understood the true extent of the problem of waste. And so he dedicated the next few months to find solutions to this problem.

“Our modern-day society only understands the value of money. Unless the people see monetary value in managing waste, they will continue to throw trash anywhere and dump garbage everywhere,” Parag had realised.

And so Parag started his work from the Margao market area where he set up a biogas plant. He would collect garbage from the market area and convert it into biogas, then supply the same to restaurants nearby. In this market, Parag also found out that several kilogrammes of fishes were being thrown at a dumpsite at the end of every day. Additionally, due to excessive deforestation in the state, the land was losing its carbon content, and so the soil was becoming less and less productive. Parag knew that fishes were a major source of carbon, so he started making compost out of dumped fishes to produce manure, leading to increase in carbon content in the soil. Today, the manure produced by Parag is used by many farmers across the state.

However, this overwhelming response has not stopped Parag from making new efforts.

Despite sufficient rainfall, there was a considerable water crisis in Goa. The reason was rampant deforestation. So Parag used natural and traditional methods to treat greywater to be used for household chores and drinking. Today, this technique is employed by several houses and restaurants in Goa.

“Finding a solution to problems is as important as creating awareness about the problems. While creating awareness is extremely important for our newer generations, it is also their responsibility to find solutions for the future generations. And so my focus is on finding livelihood through finding solutions to environmental problems. This way, I hope to show people new models of employments to bust the myth that if you’re working for the society or the environment, there is no (or very little) source of income,” says Parag.