If Nature was our Teacher, would things be different? 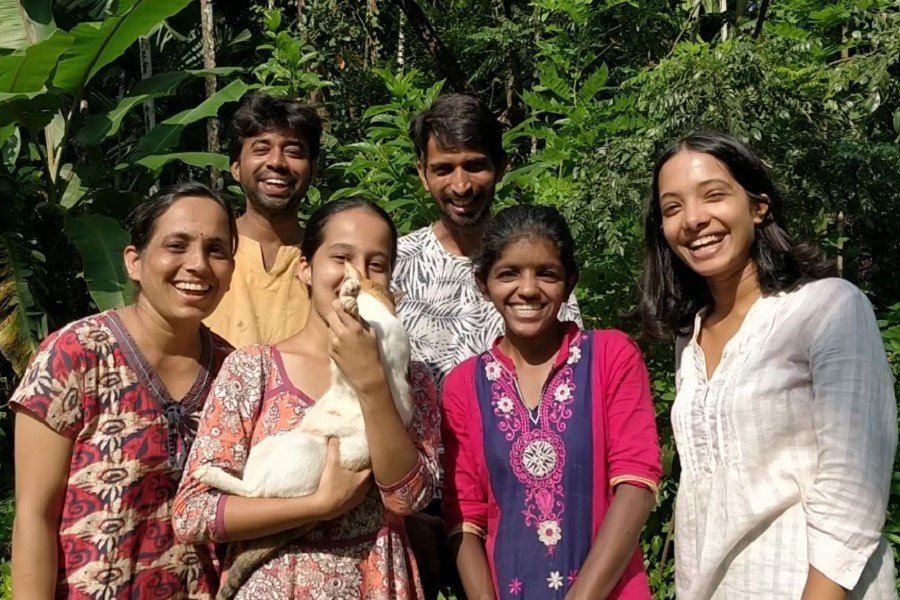 What is the quest for truth? Is there a truth? Is truth a world that opens up possibilities, mistakes, retrospection, and direction? Syamantak University of Life is one such place, space, organization, commune, where truth guides living and learning. Born out of experience, this home consciously learns and unlearns through sustainable living and open education. Mrunalini came here at the age of three with her parents, Sachin and Meenal, and has had a unique journey of learning. Unlike most kids, she did not attend formal schooling. Her parents came here with a quest to understand how they could educate their child in a holistic way, and thus Syamantak University of Life came to be. Life is the circle in which all those who live on Earth are placed in, and the problems or obstacles that one witnesses in their life, becomes their syllabus for learning. The campus is located in Dhamapur, a village nestled snugly amidst lush historical forests and an ancient lake in the Malvan taluka of Sindhudurg district which lies in the Konkan belt of Maharashtra. The house that Mrunalini lives in was constructed by her great-great grandfather in 1931 before he moved to Kolhapur and settled there. Dr. Kalbag, founder of Vigyan Ashram and Sachin’s inspiration, had advised Sachin and Meenal to have their child to be brought up in a rural setting where she would learn the practicalities of life from her immediate surroundings. So, 76 years later, they set foot into a bat-ridden house, heeding Mrunalini’s great-grandfather’s advice. 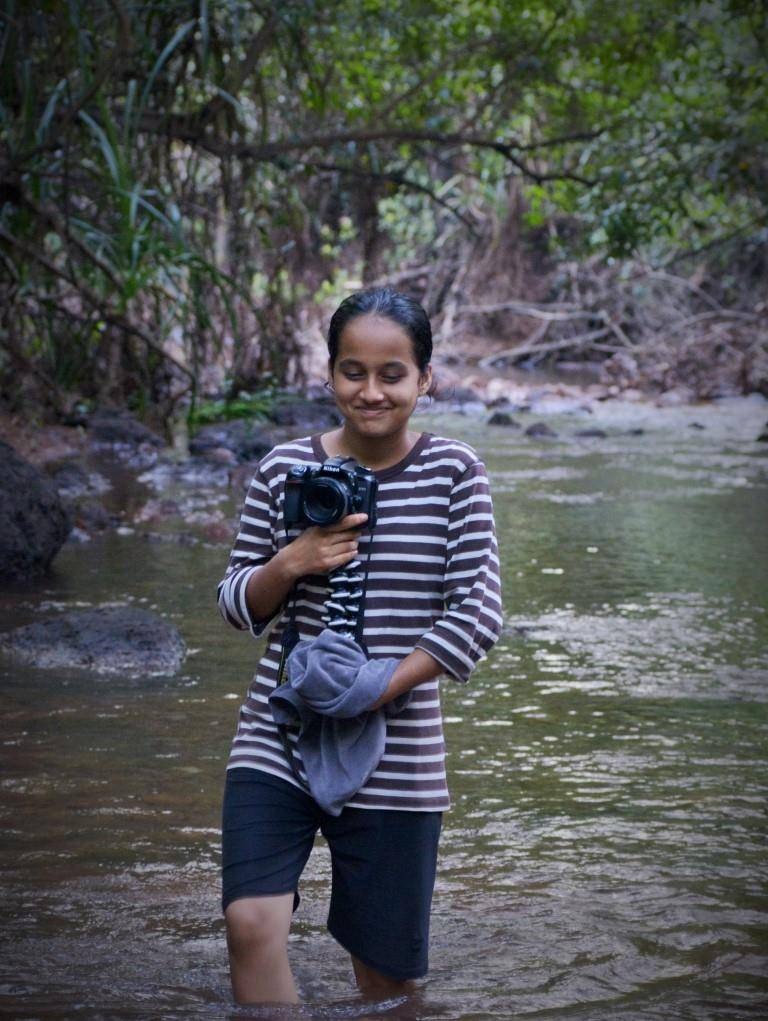 Mrunalini while filming for the documentary being made on Dhamapur lake

This is about the time when the idea ‘School Without Walls’ (what University of Life was earlier known as) began to take shape and to set it into motion, and this family of 3 needed a larger group. That was when Mohammad, Syamantak’s first student, came to be a part of this idea. He was from a child care centre in Kondura, also in the same district. After completing his 10th standard, he did not know how to go ahead, but what he did know was he did not want to follow the crowd. He met Sachin at this phase of his life, and came back with him to Dhamapur. Here, for the first time, he was exposed to the concepts of open education, and sustainable living amongst others. He learnt the art of operating computers. Back in school, a computer was something he could only look at from the back of a class register, waiting for his turn, but would instead hear the bell ring, bringing the period to an end. At Syamantak, he thought of himself as a student for the first year. After that, he became a part of the rural and natural setting they lived in. He is now the managing trustee of Syamantak.

The foundation is 14 years old, with six people as part of the commune and interns from across the country and the globe joining in every now and then. Vishwas and Shobha are the other two who make up this small tight-knit bond of Syamantak. A homely and spiritual atmosphere is an important part of their value system, and the beginning of this value is a learning journey in itself. In that journey, University of Life evolved from a more technical & skill-based approach to place more value on relation building and togetherness. Every morning and evening, they dedicate a prayer session to their guru, out of gratitude for the guidance offered at challenging times.

Together, they take up a multitude of issues. Each issue that they deal with generally has an interesting backstory. For example, they had left a dropper in a fragrance bottle when they had been making hand-made soaps. The next day, it had burnt. This incident became a new topic of study: if synthetic chemicals were so harmful that a dropper could burn overnight, what happens to our skin? Why do we need perfumed soaps anyway, isn’t the purpose more important than the smell of it? What are the natural and safe alternatives to this problem? Similarly, other topics of practice, natural construction, cow rearing, cooking, legal studies, natural products, conservation, etc. came into their lives and realm of learning. Mrunalini kept close to these subjects of study, and through these, she indirectly learnt what one learns in watertight compartments at school – Math, Science, History, Geography, etc. She is now 17, and pursuing a distance education degree in Journalism. For her, opting for this course came organically with her lived experience. “Whenever it came to any issue, I would take up the drafting or writing part. These are skills I am good at, and it is something I enjoy doing. So for me, journalism came naturally,” recalls Mrunalini. She also states that there are multiple things she enjoys doing, like understanding legal terms, natural farming and natural construction, and these are skills that she perceives as a must for living a healthy life. “If I want to live a good life, I need to know a little about everything,” she asserts. A major challenge, which later transformed into a landmark moment, occurred when Syamantak received a notice from the Department of Education enquiring why Mrunalini was not admitted to school. In response, they filed a PIL in the High Court, which resulted in the setup of the “State Open Schooling Board” in the state of Maharashtra. 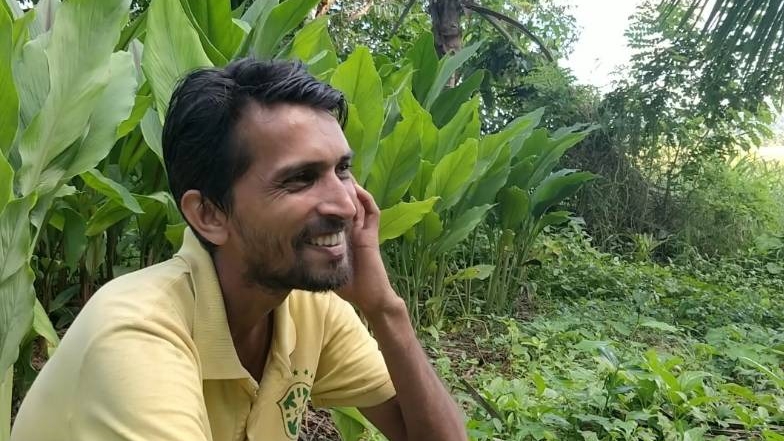 Mohammed, captured in a light moment

Mohammad likes to take up more of the conservation research and development work. “In this house, everybody does everything. There is no ‘one demarcated role’ as such,” he says. It is just that someone handles more of what they like and are good at. He did his Masters in Rural Development after a diploma in Rural Technology and is now looking to do a PhD in oral history related to local traditions. “The foundation that was laid here is strong, but will we be able to carry it and make it stronger for the coming generations?” That’s the real challenge, according to him. “The work that we do should create an impact in the society or village we live in. That is what we hope for. It is difficult, because people living in rural areas today want to give up their practices and traditions to live a lifestyle like one does in the cities. The lure of the cities is tempting; distracting. Only when you observe it closely do you realise how messed up it is,” says Mohammad. Almost half the population of Dhamapur has migrated to Mumbai or Pune. Farming is not how it used to be. Young folks do not know how to respect the surroundings they are blessed with. But some people are changing for the better. There is hope. People like Manoj, a localite who used to ride a petrol fueled boat in the Dhamapur Lake wetland, the only World Heritage site in Maharashtra, is now looking at building a sustainable business out of a rowboat. 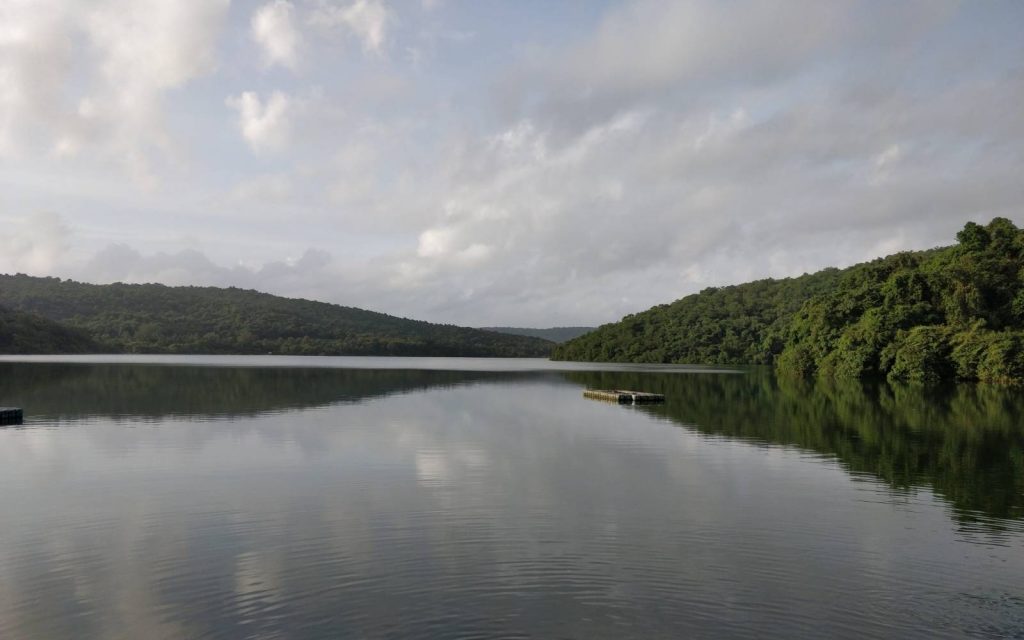 The Wetlands Conservation movement is another very interesting tale that started from the Dhamapur Lake struggle. Meenal, Mrunalini’s mother, was pursuing her MA in Rural Development, where she chose Dhamapur Lake as the topic for her dissertation. As part of University of Life’s practice, everyone got involved in the project. While studying the area, they found out about violations happening in the 500-year-old lake, while also understanding the history and traditions associated with it. A singular struggle to save Dhamapur Lake was initiated, which then transformed into a first-of-its-kind documentation process of 480 wetlands, across 5 districts of the Konkan region solely through community participation. Apart from creating and suggesting this unique idea, Syamantak also took responsibility for appointing civil society members belonging to different faculties to form an expert committee to document the wetlands ecosystem. The organization is appointed as a Wetland Coordination and Training Organisation for districts in Konkan division of Maharashtra. The documentation done by Syamantak on Dhamapur Lake resulted in receiving recognition as a World Heritage Irrigation Site by The International Commission on Irrigation and Drainage (ICID), the only one in Maharashtra.

Mrunalini and Mohammad are currently part of the efforts in making a short film ‘Mee Dhamapur talaav boltoye’ (This is Dhamapur lake speaking), which seeks to educate viewers on the local traditions, biodiversity, and the need for the conservation of this wetland. This short film is completely based on voluntary participation from different communities, too.

Mohammad hopes that more and more members of the village adapt to a more sustainable lifestyle. In Syamantak’s future, he sees an organization completely self-sustaining both in terms of lifestyle and funds. He says that while it is important to generate revenue, it has to be balanced on the scale with life values. “We have to remember to never compromise on our values.” He wants to be able to run projects for the local community while also being able to finance it. “Now, we run fundraisers to support most of our campaigns, which is alright. But I hope in the future, we can cover the cost with our revenue.” Syamantak runs a natural products store called Swayam Naturals which is the base of their sustenance. They also make and sell organic shrikhand and ghee from their Gir cow’s milk, but all the revenue generated here goes to the welfare and maintenance of the cows Sindhu, Narmada, and her new-born calf, Nandi.

In all this, rural journalism has a major role to play. Mrunalini hopes that with her practice, she can bring about grassroot level changes in the community through awareness and education, while also impacting policy-making at the bureaucracy level. “When I talk about creating an impact in the rural communities, I believe that a major part of it involves changing mindsets. And when I talk about the bureaucracy or policy level, a major part of it will involve pressuring the authorities to take up and give due importance to matters that they are negligent about today – like conservation, rural development, etc.”

At Syamantak, everyone believes that no matter what achievements and failures they have endured so far, the real success lies in carrying forward the vision and impact of sustainable living and open learning. So each day, they strive to take a step towards achieving just that.

Syamantak University of Life can be reached at: 163dhamapur@gmail.com 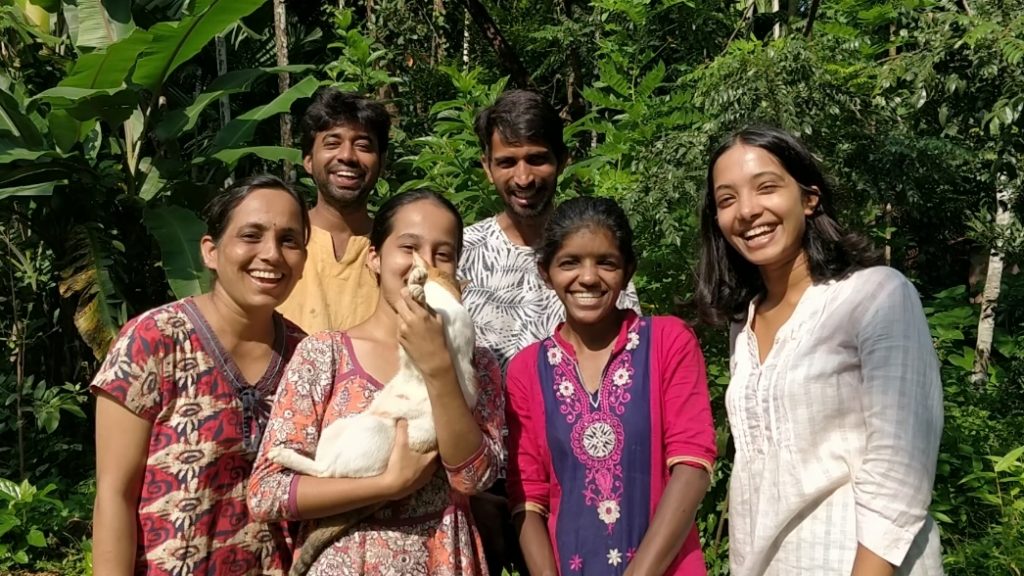 Srilaxmi with the Syamantak family – Sachin, Mohammad, Meenal, Mrunalini, Shobha and their cat

Teaser/SEO description: Syamantak, a commune that consciously connects open learning and sustainable living in a rural space, and embodies the art of community participation.