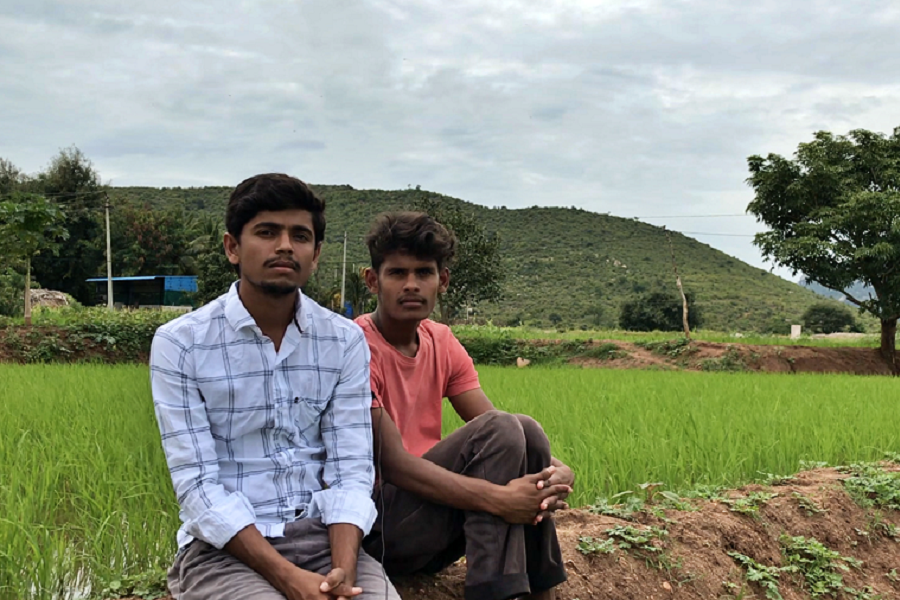 “We would do organic farming at Marudam but the farming we did at my village was with chemicals. I did not see a better future in my village. I was worried about my village.”

“We have so many trees and birds and hills here, I sometimes catch myself thinking that all of it will be replaced with big buildings. It is a scary thought.” 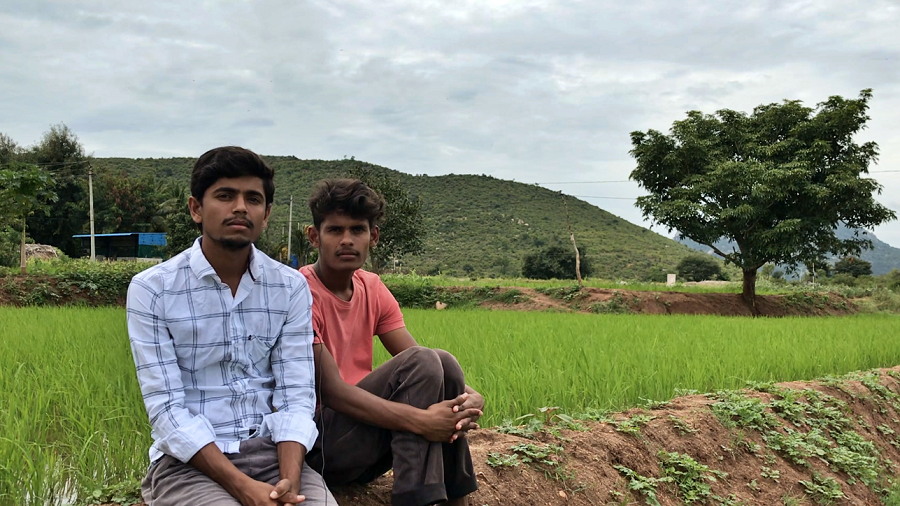 Nanda and Anil at their field (Photo: Saumya John)

Nanda and Anil, young brothers from Diguvapalem have found their share of fears and worries rooted in our country’s present political and economic climate. Gopanavaripalli, officially known as Diguvapalem, is a small village a few kilometres away from the sub-urban settlement of Thettu. While the aerial distance remained the same, the youth migrating from the village in search of livelihood has made the village grow closer to the city. Anil and Nanda have embarked on the journey to re-imagine their village as self-sufficient;  revive the connection of the villagers with the land that cultivates their food, the water that quenches their thirst, and the air that they breathe.

Gopanavaripalli, loosely translated as “the village of cow caretakers”, had its first residents from a family of farmers who travelled from the village of Thettu hunting for wild boars. Untouched potential fertile land, space for their expanding families to live comfortably and the serene view made them settle here permanently. The village now has 27 houses and is the residence of their progeny who resides as farmers and cowherds.

The Rishi Valley School was set-up in Madanapalle in 1926 by J. Krishnamurti, philosopher, speaker and writer, with the intention to build a culture to consider education beyond, or as means of holistic growth. The school has impacted the perception of learning among villagers. Teachers from Rishi Valley often visit the village to interact with the children and provide support in their areas of interest. It was at the behest of one of these teachers that Nanda and Anil decided to change their life trajectory.

As kids, the brothers often lend a hand at their father G. Narasimhulu’s farm. One of the teachers from Rishi Valley School, a good friend of their father suggested that Nanda should be sent to Marudam Farm School in Thiruvannamalai, Tamil Nadu- a school where his interest in farming could be mentored and he could also gain connections with like-minded youngsters. Nanda and his father had already been discussing ways to shift from their present chemical-based farming process into an organic one. His father had been influenced by Subhash Palekar, the person who introduced the concept of zero-budget natural farming to the world. The suggestion from the teacher thus didn’t face any contemplation or deliberation.

At Marudam Farm School, an initial three-month stay of Nanda was extended by three years; roles moved from volunteer to student to teacher. The diversity of activities at the school, such as nature walks, creative sessions, organic farming, coupled with a supportive staff awakened the desire in him to set up a similar space in his village. Nanda got his brother Anil to join Marudam while he was in the 10th standard. Anil gradually developed an interest in nature photography there. This was a marked difference from a child hunting birds and insects and indulging in fights to a person thinking consciously about his actions. Anil later decided to return to the village and join the work Nanda had started by then. The learnings and experiences from Marudam school propelled the brothers to return to their village and venture into community-based impactful activities.

The brothers were aware that moving from chemicals towards organic farming would not  happen in a day’s time. They figured that they had ideologies, practices, behaviours to revise, rethink and re-imagine. As a first step, Nanda decided to first develop a sense of togetherness among the people and then put forward his ideas. Over the years, community celebrations of festivals had become restricted to individual families only. Ganesha Chaturthi marked the beginning of Nanda’s efforts; he somehow convinced the youth of the village to celebrate together, by collecting money from each house to bring a common Ganesha for the village. It was a success as cultural songs and dance found their common likeness by everyone. With each passing year, the celebration became a means for people to interact, get over their differences and build an annual event to look forward to. 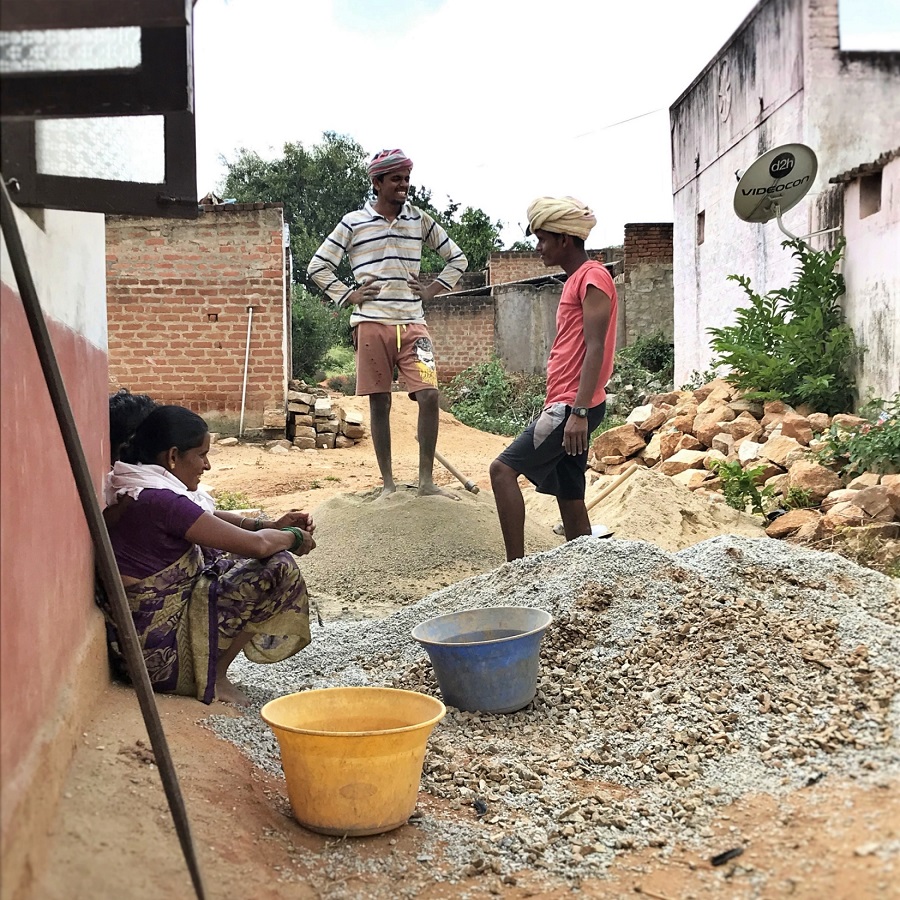 Nanda and Anil with their mother during a construction activity (Photo: Saumya John)

At present, the villagers refer to Nanda as “youth leader”, with many people working closely with him. The collective identity of belonging to the same region, religion, caste, relating to similar stories, inculcated a sense of belongingness among the youth who have slowly opened up to discussions around staying back in the village and reviving traditional farming practices as an alternative to moving to the city. The brothers have led by example by coming back to the village and not choosing the city life; discussions on amenities in the city are being replaced by discussions on the next projects to start in the village. Together they all have fought forest fires in the surrounding hills. The youth in the village have now started taking the initiative to come together to protect the hills, which Nanda sees as a big step towards conservation.

Nanda’s and Anil’s shared interest in healthy food made them slowly turn to grow more organic produce on their farm. From buying seeds from Auroville based seed conservationists Deepika and Bernard to fetching native rice seeds from Vijayram, an organic farmer from Hyderabad; people and places were explored to derive resources to support their cause. Rain-fed crops such as groundnuts, red gram, horse gram, etc., were already being grown without the need for harmful inputs. The traditional method of using cows for ploughing the land, broadcasting seeds by hand, and harvesting using human resources, etc. are also employed in the farmland. They are also exploring alternatives to give back resources that they use; a grey water harvesting system being the recent one. The filtered waste product is used in the fields as fertiliser, though this experiment is yet to get any takers among the other farmers.

The children of the village were also roped in for conversations impacting their future, during which they expressed their interest in having their own space to experiment, delve into thoughts, or as they say, “find ways to stay away from television”. Subsequently, a learning centre was constructed, ideated from possible solutions to the problems mentioned by the children, in addition to means to connect with nature. Two teachers were recruited as well, who enfolded beyond book learning not limited to stitching, painting, singing, and more. Marudam Farm School and a few of their friends pooled in to ensure remuneration and supplies for the teachers.

Furthermore, a tree nursery was also started to regenerate the hills which were seeing a fast depletion of green cover due to forest fires and grazing. The weekly nature walks from the learning centre served as tree plantation drives. The children are taken to collect seeds from the existing trees during the fruiting season and germinate in their nursery and plant on the hills in monsoon time.  In the last four years, almost 600-700 trees have been planted so far.

Closer to the plantation site, an area was cleared to build an artificial pond for rainwater to collect. As support, the villagers have agreed to not let their livestock graze in the sections where tree plantations have been done. The regeneration of the hills and water conservation is looked at as a community needs now by the villagers. 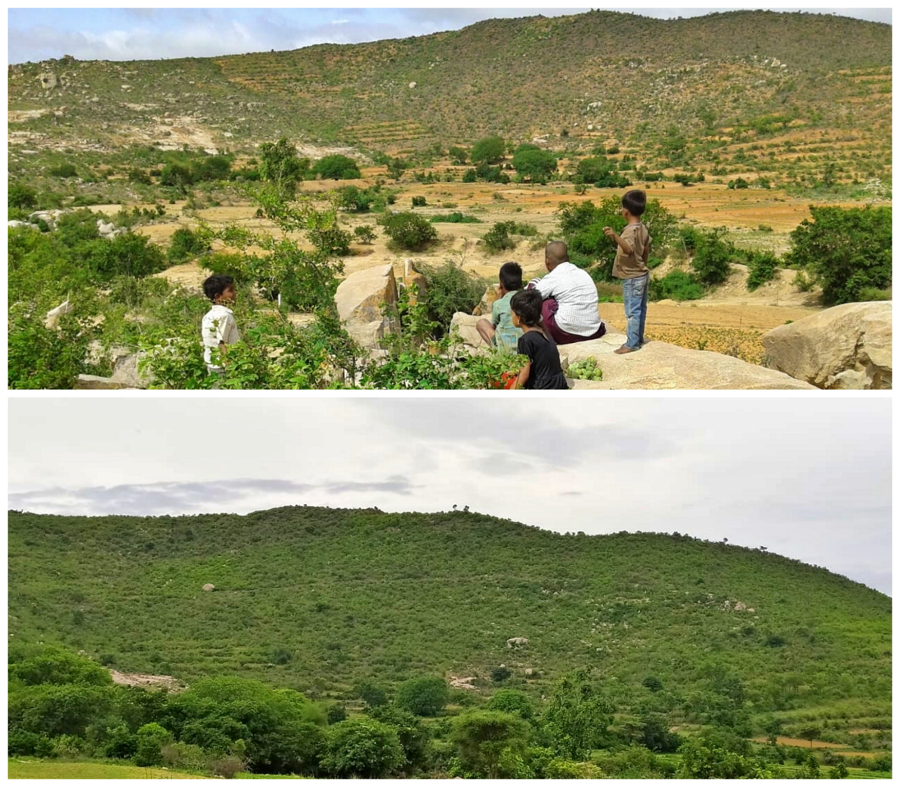 The hills before and after tree plantation drives (Photos: G. Anilkumar)

The brothers have kept the village and its natives at the centre of their initiatives, an aspiration to make it into a self-sustaining one hereafter; a system that sustains everyone’s needs. A system that is worlds apart from the present situation of market forces that control farming practices leads them to be indecisive towards turning cash crops into organic produce, or having a sheep only livestock market. Setting up cooperative stores is the next big agenda for them; this will not only reduce household demand from cities for cooking oil, and sugar, but also a commonplace would be established for the farmers to sell their organic produce free from plastic packaging. The store would also seek produce from neighbouring villages and the plan is to develop an interdependent support system among the nearby villages. Moreover, the market for organic produce has suffered since it is too less for larger markets to accommodate, and the sales have largely happened through personal networks. The stores would compensate for such anticipated challenges as well.

The quest from Gopanavaripalli to Marudam and back was a long one infused with varied explorations, connections, and reflections. The teachings of Marudam still hold value in shaping their initiatives. The two brother’s idea of development is not in the manner of mainstream definition of profit and losses but based on human connections and inherent worth and self-reliance. In the centre of it all is the desire to survive with dignity with one’s own people and one’s own traditions and stories. The aspirations sold to the youth from televisions and social media are something that they had to fight against. There have been several setbacks and imposed aspirations that they had to break out of; solely on the desire to revive a community that leaves resources and traditions for its future generations. This sense of community with their fellow humans and environment has guided their return back to their village. Transformation, and transcending towards greener hills, shifting to organic farming and the ambition of the villagers to not migrate, is an obvious take on Nanda’s and Anil’s accomplishments; extending more by their continued efforts, initiatives and conversations.

Nanda and Anil can be reached out at: nandudhanush7@gmail.com

Teaser/SEO description: The journey of Nanda and Anil as they lead the youth and children of their village in reviving the land for increased self-reliance.