Looking for the lost plate 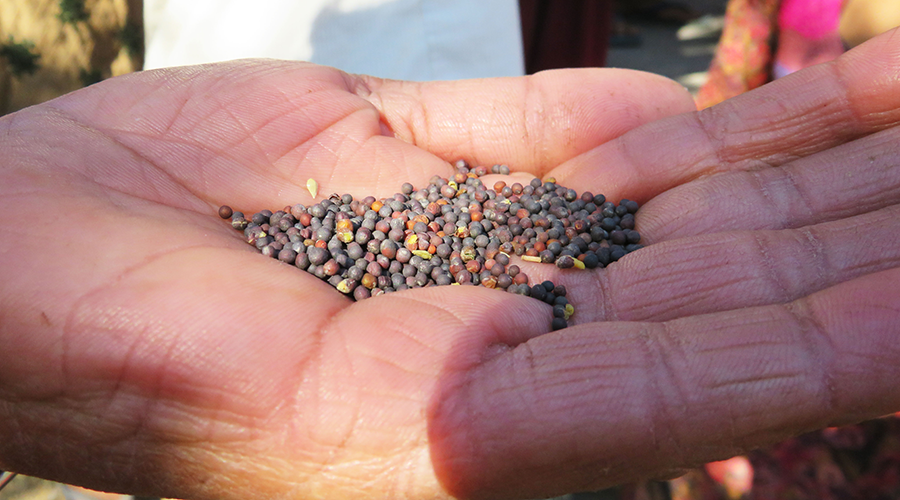 Our latest parinda, Nekram Sharma, hails from a family of farmers in Karsog, Himachal Pradesh. After he completed his education, he, too, joined his family in farming activities.

In early 1990s, the Himachal government had launched a literacy campaign; and — always one to help others — Nekram ji associated himself with this initiative. While he continued farming, he also visited various villages to educate people. It was during this period that he came across some academicians and social workers from the state who opened his eyes towards, and gave him a deeper understanding of, the plight of people who live in rural Himachal. And so Nekram ji decided to compliment his literacy initiatives with discussions on pertinent issues in an effort to raise awareness about them among the community members.

One of the major issues he came across in the state was lack of sufficient fodder. When he went deeper into the problem, he understood that excessive felling of trees in the jungles was the reason behind this shortage. And so, Nekram ji decided to start some initiatives for the protection and conservation of forests. His first step was to make people aware about the importance of forests.

Eventually, Nekram ji and his fellow villagers were successful in planting trees in a hilly area spread across 200 hectares. This solved their fodder crisis to a great extent. In fact, the village no longer felt short of fodder for cattle.

As time passed, Nekram ji became more and more aware of the community and its problems. He noticed that farmers’ dependence on chemical fertilisers had increased a lot. This was affecting the crop and the farmers’ livelihood. He noticed that people were no longer growing crops to feed their family but to sell it in the market. Indigenous and traditional crops had been replaced with cash crops. The result of these was nutritious food on the plates of those who were growing these crops had reduced. Diseases, which people had never heard of, had started making homes in the bodies of villagers. These realisations were enough to encourage Nekram ji to practice agriculture in a way that protected the seeds. He then distributed the seeds in neighbouring villages to encourage others to grow similar crops.

“Local environment compliments indigenous and traditional crops. These crops hold all the nutritious elements that are necessary for people of that region. They even protect a person from diseases like diabetes, cancer and other heart ailments. At the same time, these crops increase the digestive power and ensure continuous detoxification of bodies, thereby strengthening our muscles, respiratory system and nervous system,” he tells me.

He adds that though farmers have largely quit the practice of growing indigenous and traditional crops today, these crops had been the key source of their meals for thousands of years. If you look back at our history, malnutrition never existed back then. The crops did not even require fertilisers.

“These crops have been taken off our plates through a well-planned conspiracy. When these crops were staple food for lakhs of Indians, companies that made seeds, chemical fertilisers and medicines were not flourishing. However today, when these crops have gone missing from the fields and the plates, the same companies are expanding by leaps and making four times the profit,” say Nekram ji.

Nekram ji recalls the time when several hydroelectric power projects were commissioned in Himachal Pradesh. The commissioning of these projects meant threat to rivers and villages. One such project was commissioned near his village, too. This meant that thousands of people from his village and nearby villages would be displaced; rivers would be destroyed; and the entire local ecosystem would be disrupted. But Nekram ji was sure that he would not let this happen; and so he approached the Supreme Court and the National Green Tribunal to stop the execution of this massive project.

Today, Nekram ji is happily settled in Karsog where he works with the local community towards their self-employment and self-sustainability. There are a number of weavers in his region but a market-driven competitive approach has considerably hampered the economy of this sector. However, there are a few elderly men and women who still hold the knowledge of this specialised skill and art. Nekram ji is working with this group to reignite the art in the community. He regularly takes the beautiful handloom clothes made in the village to a wider customer base through various fairs and exhibitions in an effort to improve the weavers’ livelihood.

Nekram Ji has been involved in such initiatives for the last 25 years. None of this is work for him anymore. In fact, it’s his passion and habit. He goes around visiting villages to discuss their issues, raise awareness among them about the solution. I don’t think he’ll be able to get any sleep if he doesn’t do this. He has dedicated his life for the betterment of his community; and whatever time is left, he wants to use that, too, for this purpose.