Saving ourselves from an early apocalypse 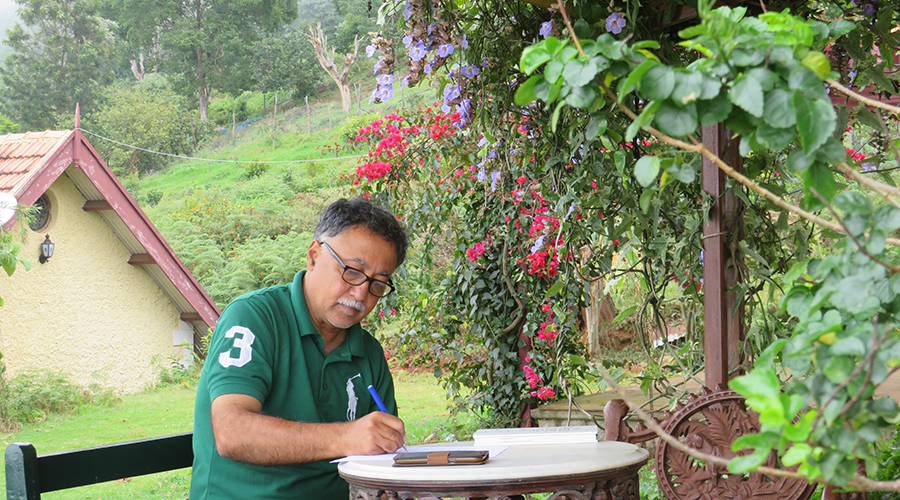 Bollywood’s well-known director Mansoor Khan, who has made successful films like Qayamat Se Qayamat Tak and Jo Jeeta Wohi Sikandar, is these days settled in the small but beautiful town of Coonoor amid the mesmerizing Nilgiris.

When I met, my first question to him was, “What made you leave the glistening world of Bollywood and settle in these hills?”

He replied, “I never wanted to be ‘a part’ of the filmy world. I always knew I wanted to spend my life away from the fast pace of cities and amid natural surroundings. However, I had spent a lot of my parents’ money on my education, and somewhere I felt guilty about it. I wanted to prove to them that I can take responsibilities and make a decent living. So I reflected on myself and thought what would I be good at. I realised that I could be a good story-teller and that’s how I decided to try my luck in the world of cinema. However, even at that time, I was very sure that it would only be a temporary phase. Eventually, I had to go and settle amid nature. I had even bought a piece of land in Alibag.”

When Khan was taking his first few steps in this direction, he came across a new perspective of looking at life. Through this view of the world, he realised that in this age of industrial development, there is no room for traditional education. It was during this time in his life that Khan was thinking of settling down in Alibag. However, the government had other plans. In a massive project to build an airport in the region, the government acquired the land of 30,000 farmers. “This incident forced me to question the idea of ‘development’.

In this period of development that has happened so far and which we should expect in the future, what are the effects and side-effects of it? I started to do deep research on it, and I learnt that the ‘development’ that everyone was talking about was very different from reality.

This changed my way of thinking, and I moved with my wife and children to Coonoor in 2003. Even in Coonoor, I continued my research. One research study took me to another and so and so forth as I understood the role of energy and oil in modern development. A result of this research was my first book titled ‘The Third Curve: The End of Growth As We Know It’,” he added.

Khan’s book throws light on ground realities of modern development, and how we are being made to believe in the ‘unlimited opportunities’ of our limited natural resources. The book also challenges the foundation of modern economics, its dependence on energy and how a handful of people are pushing this fake ‘developed’ economy by banking on the limited energy resources, and consequently destroying the planet.

“We are merely puppets in this kind of an economy and we are not even aware of who is controlling us,” says Khan who spends most of his time looking after his farm estate, taking care of his guests, making cheese, travelling the country and addressing youth about the game between modern development, energy and oil.

People often ask Khan how he has been able to leave a developed and modern city like Mumbai and live in a forest. To this, Khan always laughs and replies, “I live in this small town because it given me happiness.”

Khan’s aim is to strengthen the local economy in an effort to step out of the web of global economy.

“Here, we are able to make our lives natural and easy through our small initiatives. I have 10 cows here that give us milk to produce cheese. To produce cheese, we convert cow dung into biogas. We even utilise our waste as manure for fields where we grow our vegetables. We use solar energy as much as possible and we’ve even used local soil to make bricks for our house,” he says, adding that all our simple efforts are merely stemming out of common sense. However, it would be wrong to say that we’re living a sustainable life.

Sustainability is a distance goal but it’s a word that is being commonly used today by people who are not really giving it a thought. In the world we’re living in, nothing can be sustainable. In 150 years, we’ve exhausted resources that took 15 crore years to form. Then how can we be sustainable? Thus, it’s important that we stop fooling ourselves and accept the fact that the unrestricted and perennial development that we dream of will never be a reality.

“Until we accept this truth, a change seems distant. Imagine we’re onboard the Titanic, and I’m using my book and my experiences to point out that we’re very close to hitting the iceberg,” Khan points.

“Luckily, there’s still hope for improvement in our country because majority of our population is dependent on frugal means of living. They preserve resources, utilise them efficiently and earn their livelihood from land. India is still a long distance away from the state of being affluent and ‘developed’ unlike many western countries. All we need is to understand this illusion of development and economy — which the world is trying to make us believe in — to preserve our resources.”