A Nomad for whom the World is a Home 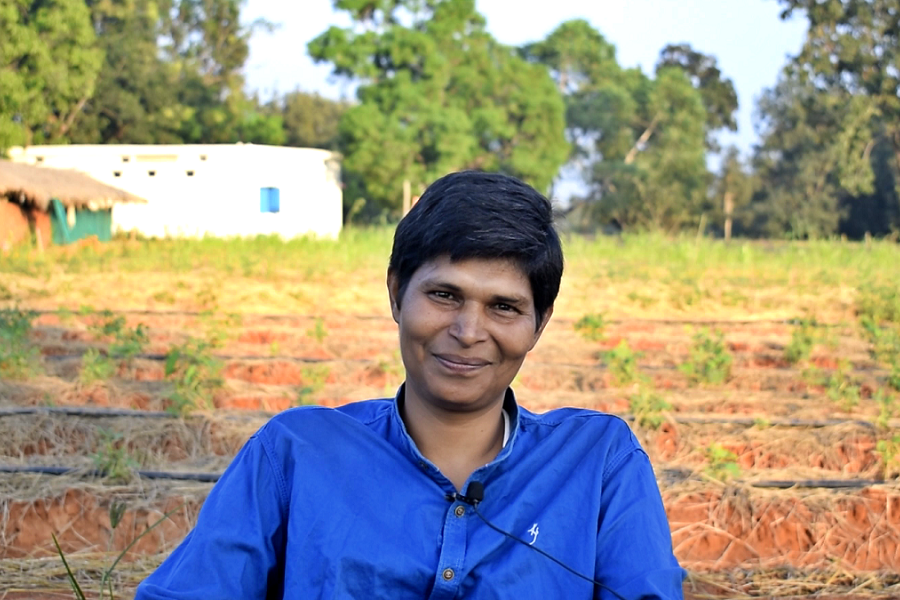 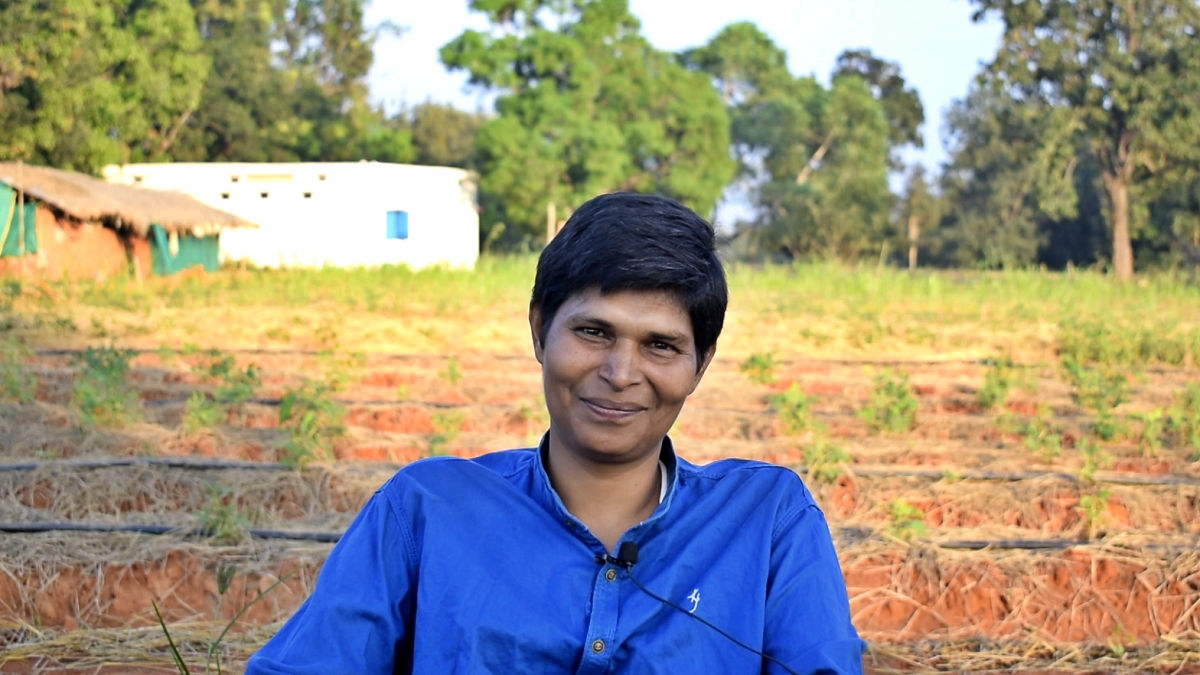 “I was born into a large farming family in Bihar. I was made to stay and work in our fields as a punishment. My family used to tell me that only losers do farming in the current generation.”

Rajnish was never really interested in school. He was only 10 when he ran away from his home for four years to escape the pressure from school and his parents. He was brought back and put back in the school. When he was in class 9, he went to Uttar Pradesh and started working in a textile company. For almost four years, he worked in different jobs, completed his intermediate education without attending school and took admission in social work. By then Rajnish had begun to be known by the name “Raja” and that’s how the larger world knows him now.

As Raja was not so fond of mainstream education, he joined Shikshantar: an alternative educational institute in Udaipur, Rajasthan, to pursue different ways of learning. He explored various interesting topics which weren’t touched by most traditional education institutes. Raja’s curiosity for photography and film making drove his initial focus on learning, but organic farming was also a burgeoning question in his mind. Taking the suggestion from Manish Jain, the founder of Shikshantar, Raja focused on sustainable living. As he explored this area, Raja’s world began to expand, he was exposed to largely untapped potential of ecologically and environmentally conscious living, which aligned with his way of thinking. During his free time in Udaipur, Raja used to work with his friends Nirmal, Manoj and Sunny, from whom he learnt cooking.

Raja loved his way of life and enjoyed travelling and learning on his own. ”When one is actively involved in a process, real learning occurs. Travelling is the best school because it teaches you how to live,” says Raja.

After travelling around the country for nearly a year in search of sustainable communities to visit and learn from, he learned about Sadhana Forest, a community in Auroville, near puducherry that has a longstanding experience of reforestation and water conservation. Raja instantly knew that Sadhana Forest was where he would spend his time. He came all the way from Bihar, without even knowing English and Tamil.

He volunteered in the kitchen at Sadhana and, within no time, he became the kitchen manager and actively participated in their Environmental Leadership Programme. Raja, being Raja, enjoyed all the opportunities to learn new things. In his spare time, he began to volunteer on an organic farm to learn the land restoration techniques and careful seed selection firsthand.

As he progressed, he volunteered his time on many organic farms, taking his learning further to permaculture and then completing a Permaculture Design Course and also learnt techniques of eco-building constructions. Having lived and worked on different farms, Raja is proficient in organic farming and aware of its importance. But he had previously never thought of practising it on his own farm. But, his visit to a farm in Kodaikanal in 2011 has changed his life and outlook forever. During his stay on the farm, he experienced the food there to be highly tasty. He had eaten the same items and dishes several times before but he found it different and more delicious there. He decided at that moment that he would start his own farm, where he could practice organic, permaculture principles and encourage others to come learn, work, and enjoy a reciprocal relationship with the environment. His vision had been conceived.

Raja became a farm manager and started helping farmers in developing lands and farms. He facilitates farmers on how to formulate, and use bio-inputs, such as microbial composts, manures, and several preparations like amrut jal, panchagavya, fish amino acid, etc., which are vital for a cleaner, safer and economically viable regenerative agriculture.

Raja developed more than 50 kitchen gardens, farms and food forests before he started building his own farm. In 2013, he created Aranya Eco Village, an organic farm in Thattanapalli village of Tamil Nadu. Aranya Eco Village began as a small plot of land that had previously been utilised by a flower farmer and was considerably destroyed and exhausted. Because flower growing had depleted the soil’s nutrients and jeopardised the general soil structure, Raja’s efforts largely concentrated on rebuilding the land. The adoption of organic-permaculture principles and techniques has been crucial to the land’s transformation. Since the inception of the transition, the farm has evolved in recognition, resources, wildlife, opportunities, and most significantly, the farm circumstances have allowed for the production of a diverse range of fruits, vegetables, and staple grains. The yields were initially low, but have increased thereafter. The delightful side effect is that the local ecology has been restored, giving a healthy environment for a range of living entities.

By 2016, Raja had preserved a huge number of organic seeds of diverse vegetables and grains and began to distribute them among the neighbouring farmers, hoping to convince them to shift to organic farming. He also collaborated with farmers and created a farmers’ market to ease the marketing of the produce. Raja also approached friends and resource persons, particularly those interested in developing regenerative forms of rural ecosystems. Since then, the community has been steadily growing.

According to Raja, organic is what is produced and consumed locally using the resources around. He feels solutions to environmentally and socially damaging human practices today require re-establishing connection with agriculture and other earth caring practices. Agriculture is not just a technical activity of applying a few techniques for food production, rather a socio-cultural practice, rich with deep-rooted meaning for the people involved. It is soil, seed, moisture, warmth, air, vulnerability, and it is also pests, weeds, and infestation. It is observation and staying alert, it is people and relationships. Industrial agriculture is the antonym of it. 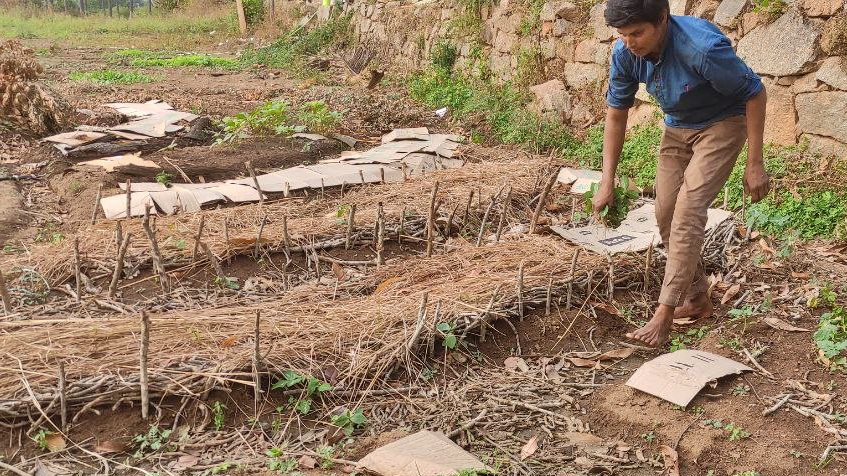 Raja is currently based out of Majhi Tikara, a community land of the Majhi Tribe near Kudumkela village, Chhattisgarh. The Majhi community is one the most neglected tribes in India despite having a significant population. Raja is living with the Majhi community to restore the mining affected land and develop a self-sustained food forest. He collaborated with Environics Trust and encouraged the youth to learn Natural Farming and work towards enabling them to create livelihoods in the village itself. There are close to twenty students who are learning the trade from him. These students now can manage their own farm. Besides this, Raja taught them eco-building construction techniques: constructing a living place using the surrounding resources.

This place is a hub for cashews and mahua (a plant with high medicinal benefits), chironji and is desirable for growing mushrooms. Raja is looking forward to establishing a value addition unit and selling directly to the consumers. He wishes this place would emerge as conscious territory. It should be spearheaded by the youth of the Majhi community, not any outsider, says Raja. 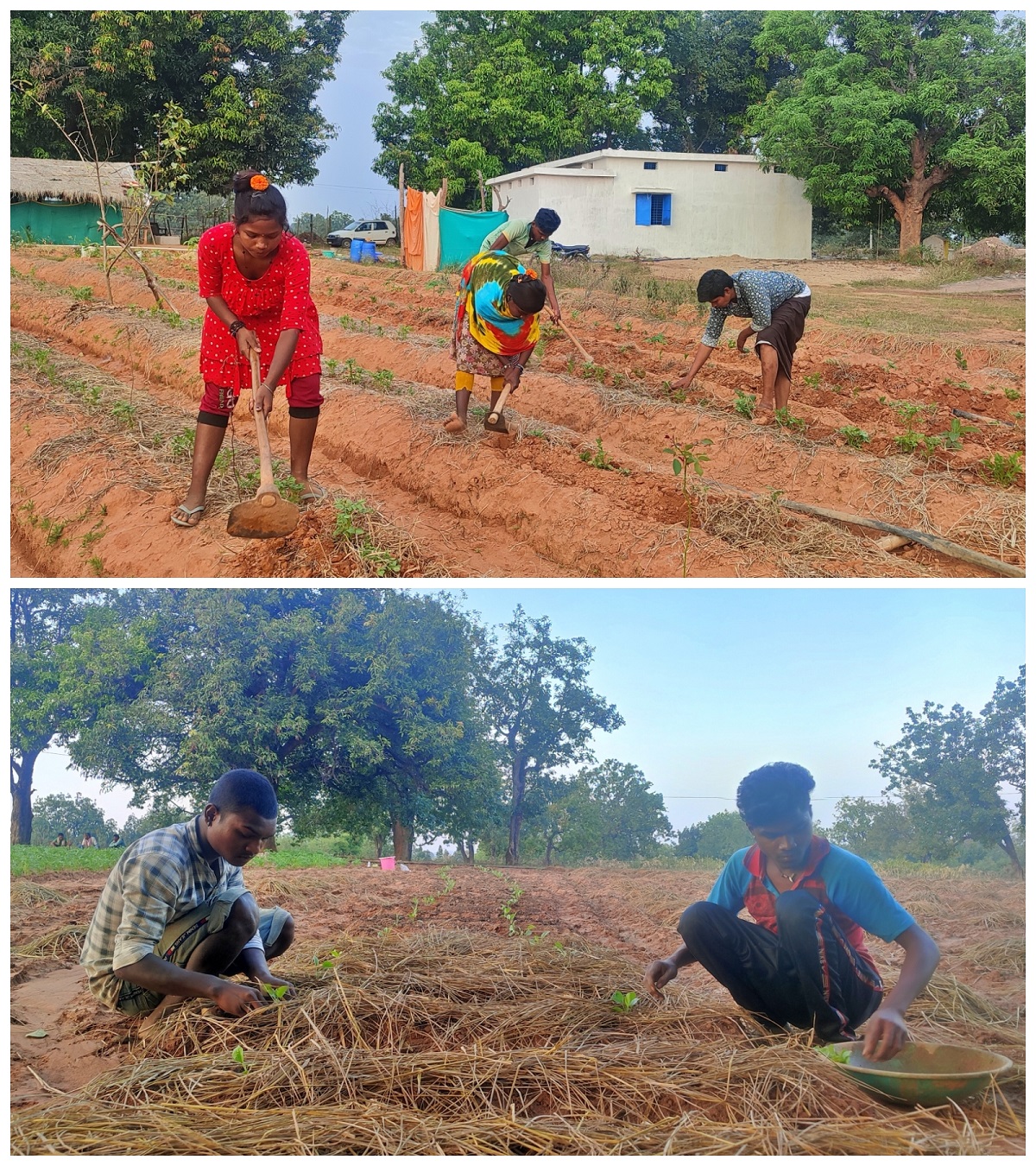 Agriculture is a socio-cultural activity with great meaning for those involved. A universe of care, attention, resistance, survival, custodianship, unity, and sacredness is nourished and sustained on this soil by farmers. According to Raja, that is what a conscious community requires.

“I have been working on building a network based on collective learning. There is a need for moving our efforts from individual to collective, exclusive to inclusive. This effort is essential for creating more compassionate, sustainable and just food systems, thus also contributing to robust local communities. Local is a novelty these days, as everything local has a modern makeover and is readily available in supermarkets. We must concentrate our efforts on dismantling corporate influence in food systems and promoting long-term systemic improvements.” He explains.

Raja feels that the myth that farming is not a livelihood has to change. He wants to see organic farming as a livelihood, a serious profession.

“I have been travelling for more than a decade now. Whatever I’m doing today is what keeps me alive. This soil has given me life. It is my obligation to give something back. Organic farming plays a major role in restoring biodiversity and food diversity. By helping people to practise organic farming, I am helping restore the environment as well. I want to create an ecosystem where all living beings: plants, birds, insects, animals and humans live in harmony.” – Raja

Teaser/SEO description: The story of Rajnish aka Raja, a permaculturist who nurtures, preserves and resists in order to create robust and self-reliant communities.