Preserving the Santali Self: History, Memory, and Culture 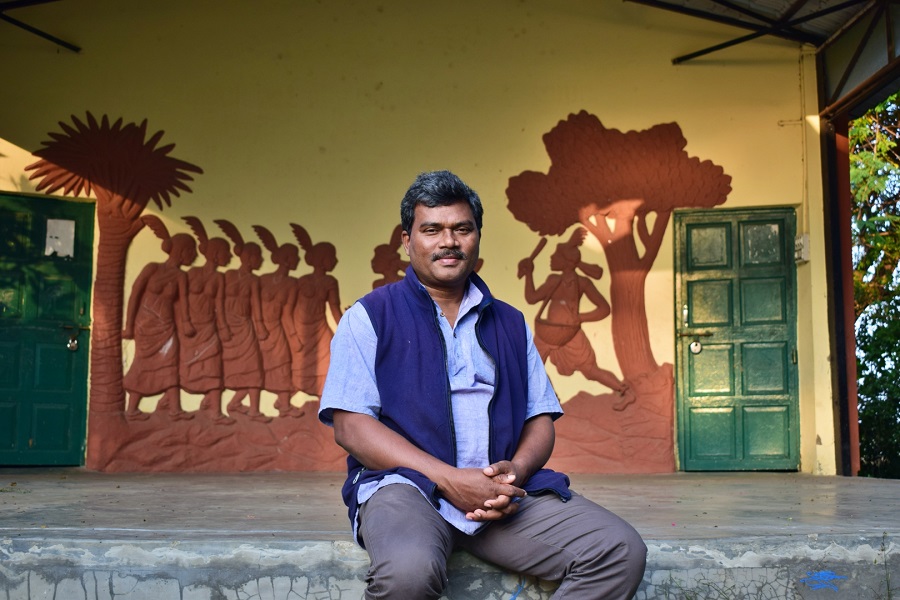 Knowing oneself is synonymous with knowing one’s history and culture. The past gives one an impression of who they are, where they come from, and what the future might look like for them. The past also shapes the culture around one, which is fundamental to one’s survival, especially in an increasingly globalised world. However, many indigenous communities in India have little or no written documentation of their history. As a result of this, many are forced to proclaim, “we have no history”. This does not mean their past is ahistorical or irrelevant. But rather their traditions and culture rely more on oral forms of conveyance of knowledge. In historiography, these small voices are often lost in the larger discourses of the elites. Here is the story of Boro Baski, an Adivasi activist and educator based in West Bengal, who aims to preserve the history of his community and culture through a community-led museum and by instilling the essence of these values amongst the children of his community. Baski belongs to the Santal community, one of the largest and homogeneous indigenous groups in South Asia, who primarily reside in the eastern region of India, Bangladesh, and Nepal. 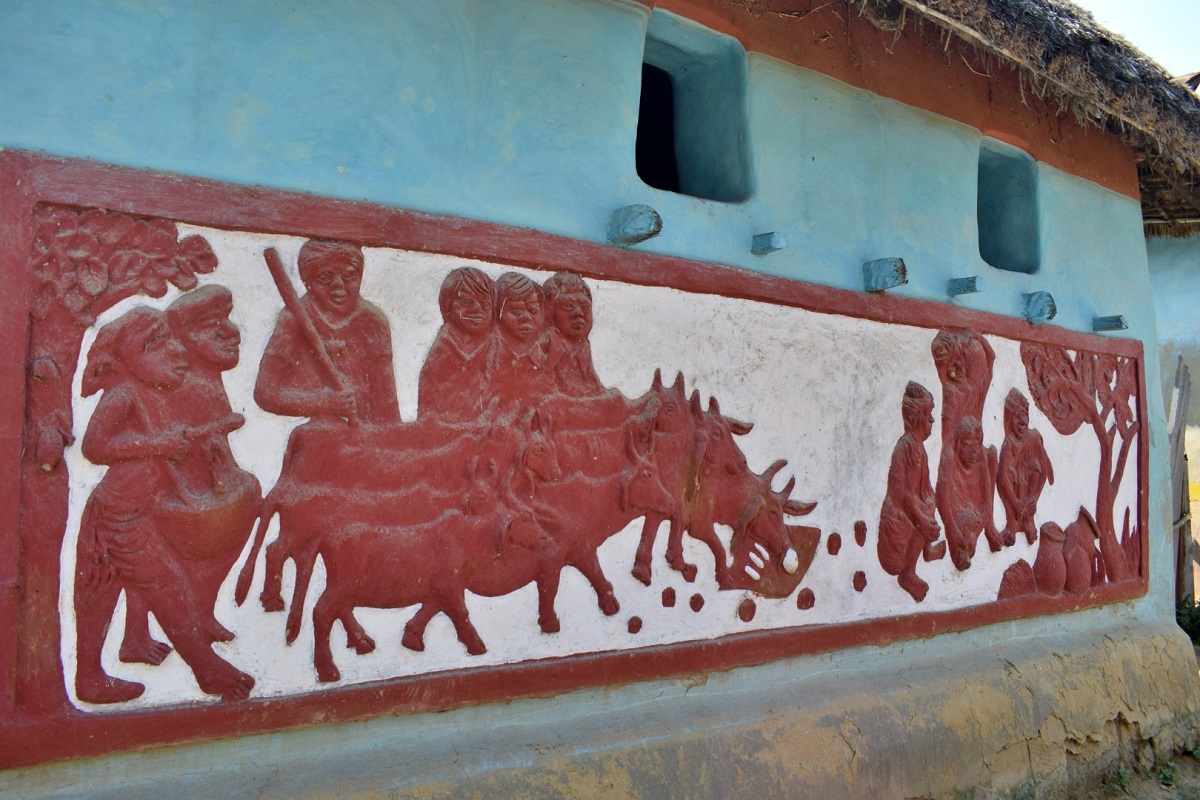 Born in the village of Bishnubati in West Bengal, Baski’s parents worked as agricultural labourers. He was the first one from his entire village to attend school and then completed his master’s and doctoral degree in social work at the Viswa-Bharati University in Santiniketan. This was because traditionally individuals from the Santal community do not attend mainstream schools. They have their ways of learning within their villages. They learn from their elders in family and village through oral techniques, in an overall setting that is much more open and informal than conventional classrooms. At a young age, Baski had experienced some of the problems that youths from the Santal community face in mainstream schools, the primary one being the language barrier. Santali is an Austro-Asiatic language that is distinct from the Indo-European languages largely prevalent in South Asia. For generations, the Santali language has survived within oral traditions of knowledge sharing. It has no definite written script. For instance, the Santals residing in West Bengal use the Bengali script to write their language. Whereas the Santals residing in Jharkhand or Bihar would use the Devanagari script as it is more contextually relevant to their immediate setting. Similarly, Santals in Orissa use the Oriya script and those in Assam adhere to the Assamese script. For a community that is neither part of the Hindu caste system nor caters to a definite script, and has been historically marginalised, it becomes challenging for youth to communicate beyond the margins of their village. Recently, Ol-chik has been recognised as a newly developed Santali script, but the Latin script has its distinct set of problems. 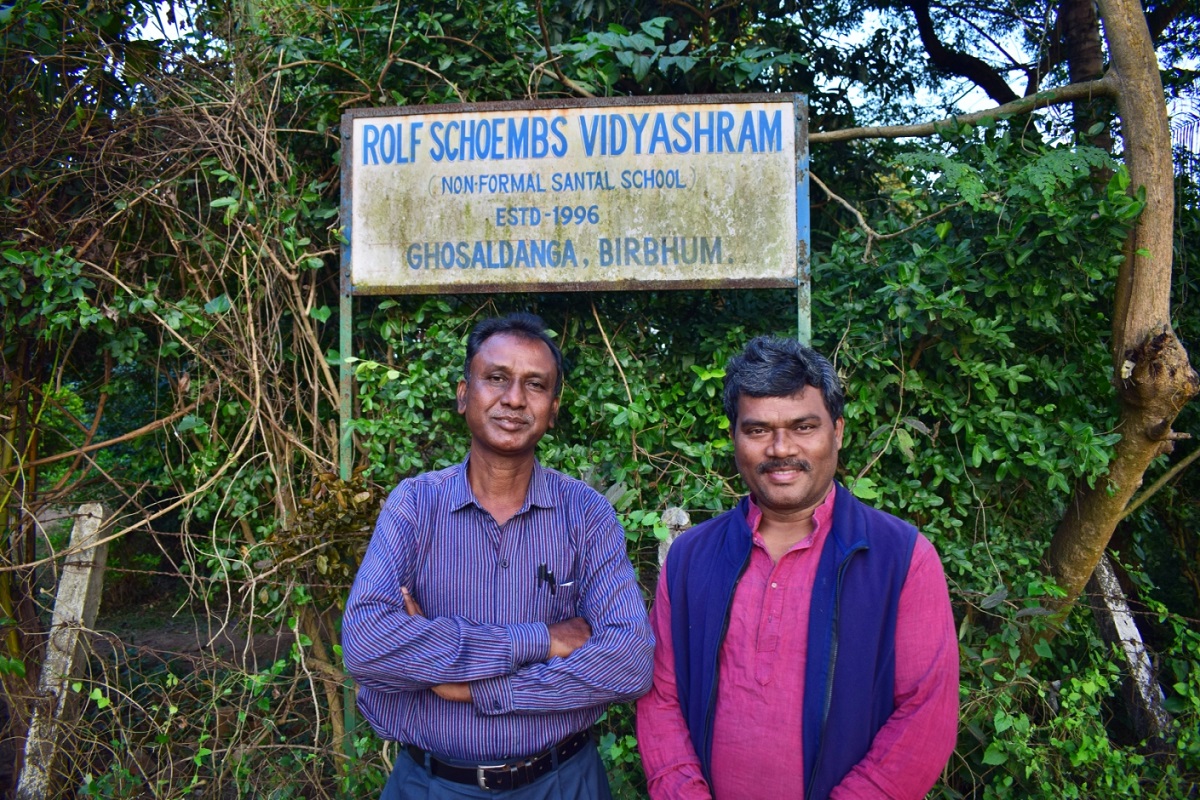 Owing to the complexities associated with the Santali language, children from this community often feel alienated in mainstream schools and drop out without completing their education. Baski, however, understood the root cause of this problem and co-founded an informal school called the Rolf Schoembs Vidyashram (RSV) alongside Gokul Hansda with support from Sona Murmu, Martin Kämpchen, Snehadri Sekhar Chakraborty, and the villagers of Ghosaldanga and Bishnubati in 1996. This community work was facilitated under the Ghosaldanga Adibasi Seva Sangha (GASS) initiative. Located in Ghosaldanga village of West Bengal, this school instils both traditional values of Santali life and modern values within its children. This allows the students to effectively enter mainstream institutions and make meaningful choices in life. The school preserves the traditional Santal self through cultural activities such as music, dance, fishing, beekeeping, and organic farming, but also coexists with the modern educational value system. As a result of this, the students from this school have entered not only government institutions but also private institutions in other Indian cities – something that seemed far-fetched if not impossible a couple of decades ago for many individuals from this community. Most importantly, although the school has adopted the Bengali script as it does not aim to burden the children with learning too many scripts, it does encourage youth in knowing the Ol-chik script which is better at representing the Santali phonemes. 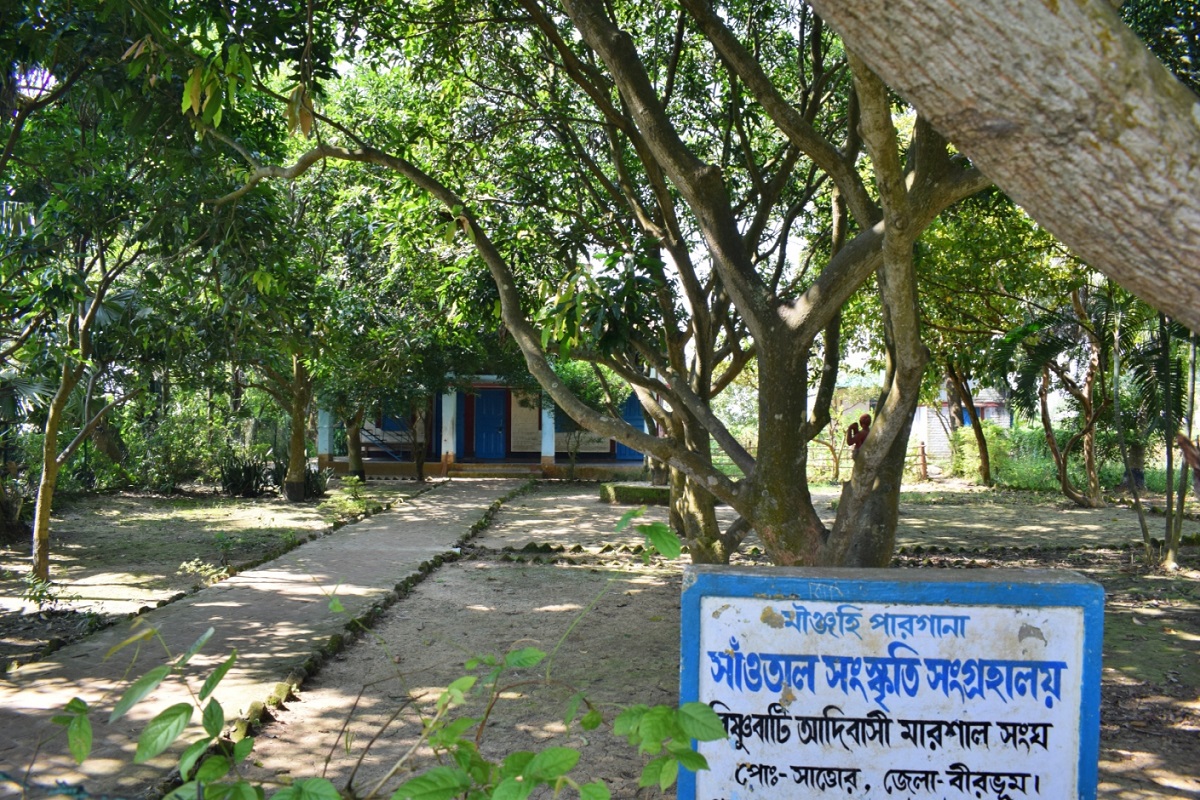 Apart from co-founding the school, Baski has also set up a museum in his village Bishnubati to voice the Santali history, memory, and worldview. This museum is managed by the Bishnubati Adibasi Marshal Sangha (BAMS), a community-led initiative registered in 1997. This museum is supported by the Ghosaldanga Bishnubati Adibasi Trust, another community-led initiative of both the residents of Bishnubati and Ghoshaldanga. The Museum of Santal Culture, established in 2007, with support from the Indian Museum, Kolkata, BAMS and GASS, has over 150 artefacts that comprise diverse traditional musical instruments, cultural ornaments and clothes worn by elders, hunting equipment, historical photographs of the Santali past, stone sculptures, amongst other objects that illustrate the Santali memory of the region. “We added these diverse artefacts because our main purpose was for the children of our community to visit this museum and learn about their traditions and culture. We consider this as part of their learning process,” says Baski who has effectively connected different worlds through this museum. Beside the Santal region that comprises Baski’s village of Bishnubati and Ghosaldanga amongst other Adivasi villages in the Birbhum district of West Bengal, there is Santiniketan – a prominent neighbourhood around 150 kilometres north of the city of Kolkata. Santiniketan is famous because of poet Rabindranath Tagore’s mission and vision to set up a university town that started with the creation of Viswa-Bharati in 1921. Between the academic town and the Santal region is the Kopai River. This river is not only a geographic divider but also one of culture. Although the separation is only ten kilometres or so in distance, a couple of decades ago, one could explicitly perceive the visible differences between these two regions in terms of how the residents lived, interacted with their surroundings, and their worldviews. Through the Museum of Santal Culture in Bishnubati, Baski has developed a platform that enables the other communities residing in the larger region to learn and understand more about the Santali way of life. The museum accentuates the Santal values and their worldview. “Individuals from other communities who have been living beside us for years know very little about who we are. The museum would act as a reminder for them to rethink their prejudices that they hold about the Santal community”, asserts Baski who takes pride in promoting his cultural heritage and preserving its rich legacy. 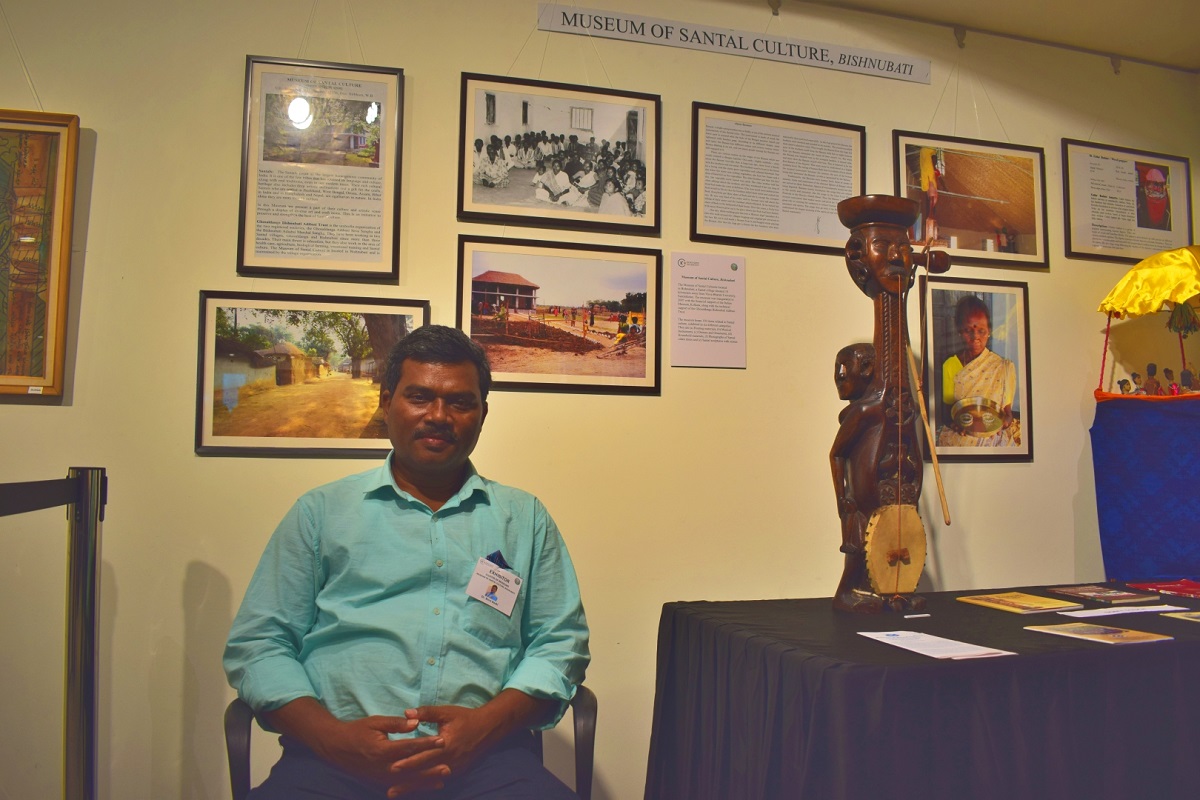 Boro Baski presenting the Museum of Santal Culture, Bishubati at an event hosted by the Kolkata Centre for Creativity in Kolkata, West Bengal (Photo: Sneharshi Dasgupta)

Besides co-founding an informal Santali school and setting up a community-led Santali Museum, Baski has also facilitated the formation of local coaching centres to consolidate the learning process of youth from his community. These centres spread in different villages in the region help children in their academic training and extra-curricular endeavours. “The RSV school, coaching centre, alongside the mentorship of Boro Baski, Gokul Hansda, and Sona Murmu had a tremendous impact in my life. Without their guidance, I would not be where I am today. I had the opportunity to communicate in my language that helped me to excel in studies and grasp difficulties,” says Anil Hembram, a former student of the RSV school, who now works at the sports and games division of the initiative. Anil graduated from the second batch after the initiation of the RSV school and now holds an undergraduate and postgraduate degree in Sanskrit from the Viswa-Bharati University. These centres are all community-led initiatives, which is based on the larger vision of BAMS and GASS, wherein individuals volunteer to educate the youth and help them in addressing difficulties that they may be facing in school. For this, various individuals have welcomed spaces within their homes for children to come and study in a group. This allows the local youth to understand problems and challenges in their native language and progress with mainstream curriculums, alongside the training that they receive in school. 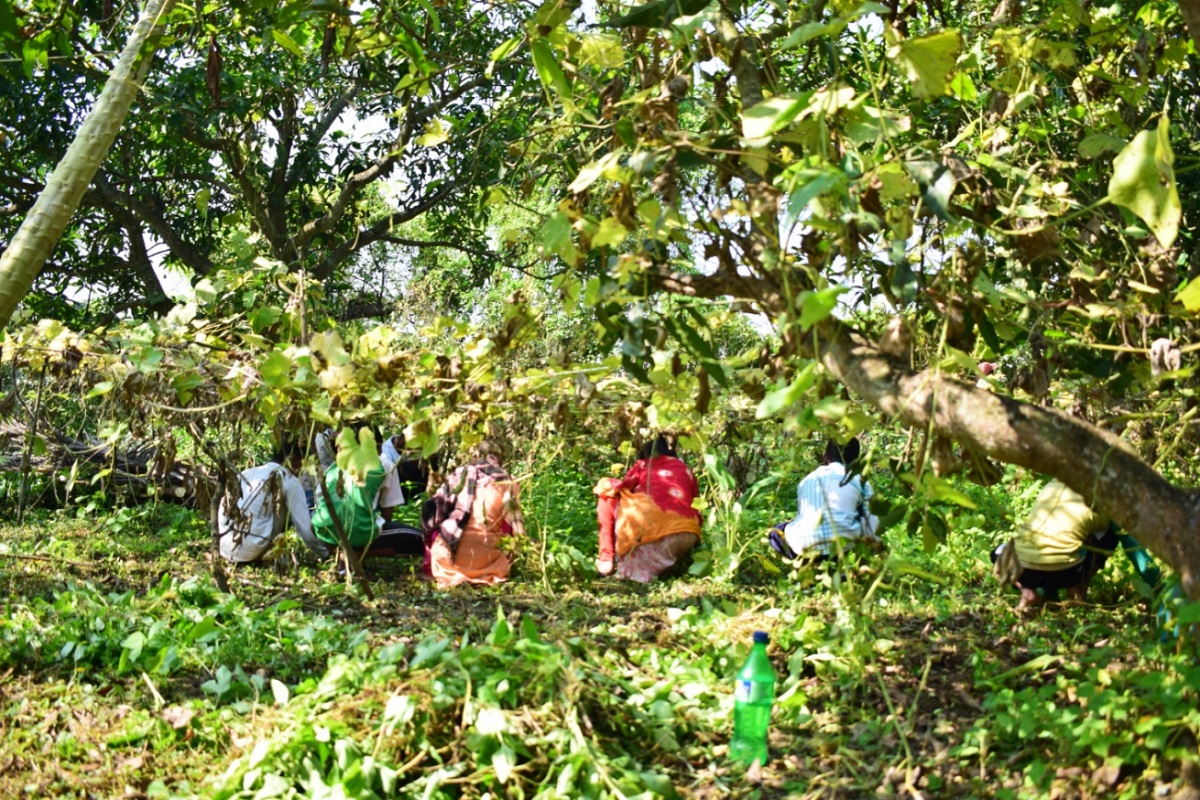 Students performing tasks as part of their class on agriculture at the RSV School (Photo: Sneharshi Dasgupta)

In an increasingly globalised world, where identities are becoming homogeneous, it becomes fundamental to preserve local traditions and knowledge systems, especially those that are at the risk of decaying. There are various indigenous languages, history, and memory that are rapidly moving towards extinction in India. Given most of the indigenous traditions of knowledge are largely oral, when a generation passes away, with them the culture starts to fade. With their efforts, Baski and the larger community that he is a part of have effectively preserved the Santali self, traditional knowledge systems and memory without compromising on modern modes of education that may be fundamental to one’s existence in today’s day and age. Baski has also gone beyond the borders of West Bengal and travelled to various Indian states as part of his quest to study other indigenous communities and some of the methods that they have adopted to progress in their respective regions. Overall, the essence of India is not based on a uniform Indianness, but within the heterogeneity of the local cultures found in the subcontinent. Something Baski is actively working to preserve, protect, and promote in his region. 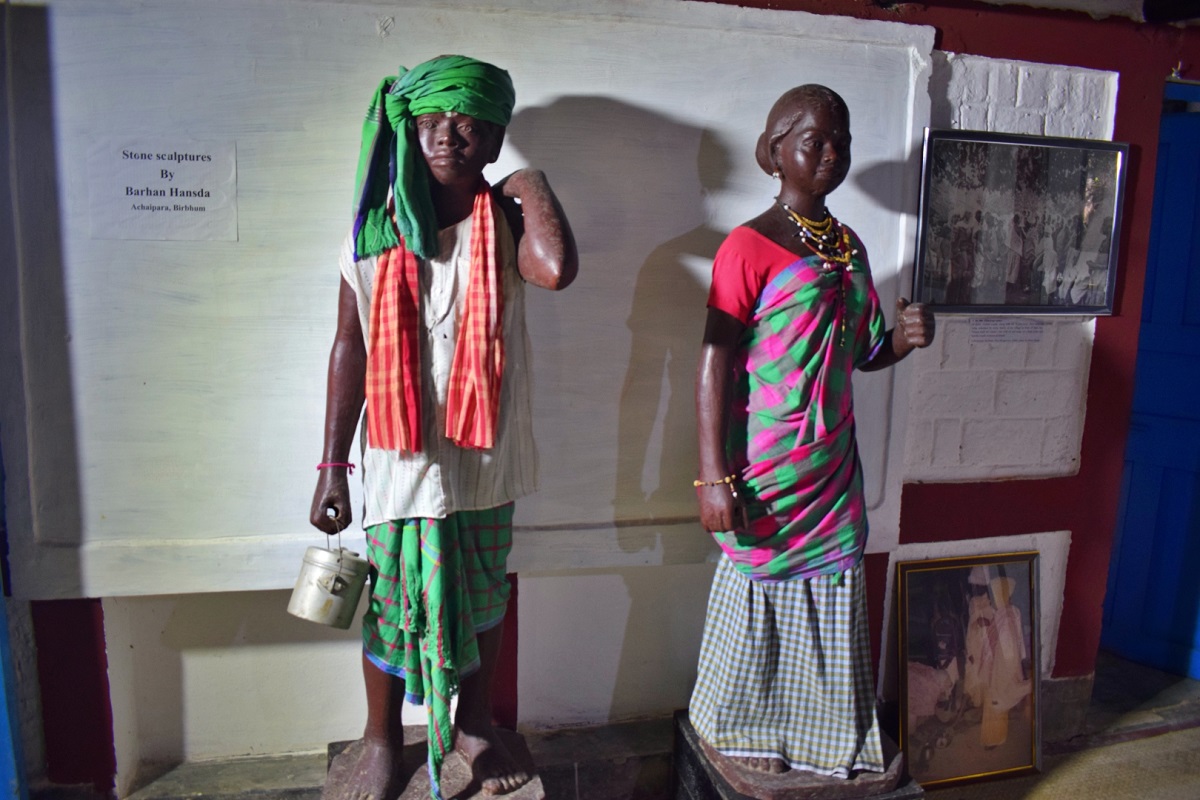 If you would like to volunteer, donate, or contribute in any way towards the work that Bishnubati Adibasi Marshal Sangha (BAMS) does, reach out to them at bams.sec@gmail.com

Teaser/SEO description: The life journey of Boro Baski from the Santal community, an educator, indigenous activist, and social worker based in West Bengal, India.