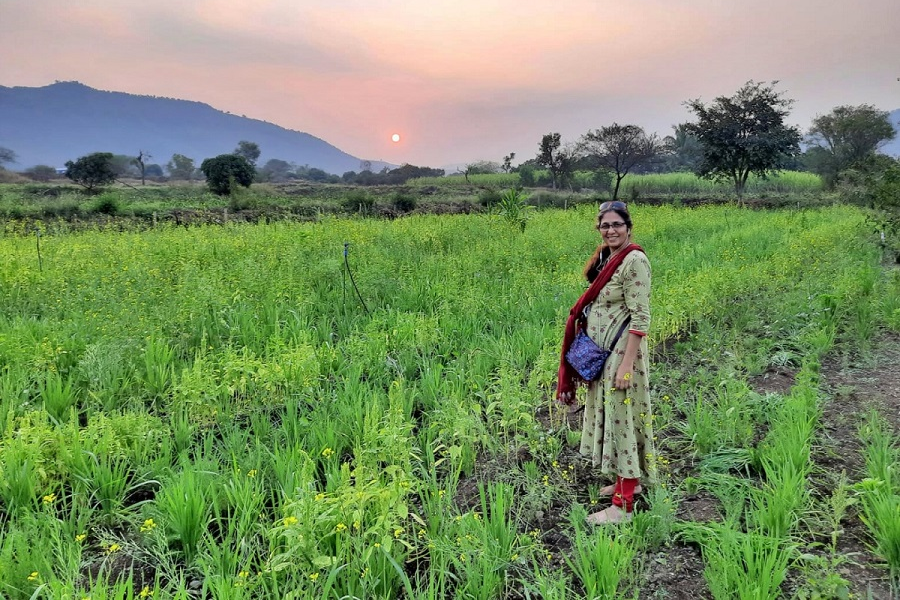 For the first 20 years of her life, Afrin Kale was unaware of the intricacies of farming. Her parents were not involved in any farming-related activity either. Following her marriage, Afrin decided to learn farming to build a connection with her husband’s family, who were farmers. Further, she recognised farming to be a necessity for survival. Afrin’s father-in-law taught her the basics of farming on the family’s land and mentored her. However, since the land was jointly owned by the family and a major source of income, Afrin was not allowed to continue her exploration there.

Afrin and her husband subsequently purchased a piece of land in 2001 on the advice of her father-in-law. This land had been fertile until a few decades ago. However, it had transformed into a marshland by the time they acquired it, and the groundwater level was quite low. “There was uncontrollable flooding during the monsoon as the runoff from the hills would come gushing down and run through this land. Consequently, the soil was too hard and the land was completely barren. All the landholders in the area were facing the same problem and were helpless because of insufficient knowledge,“ recounts Afrin. 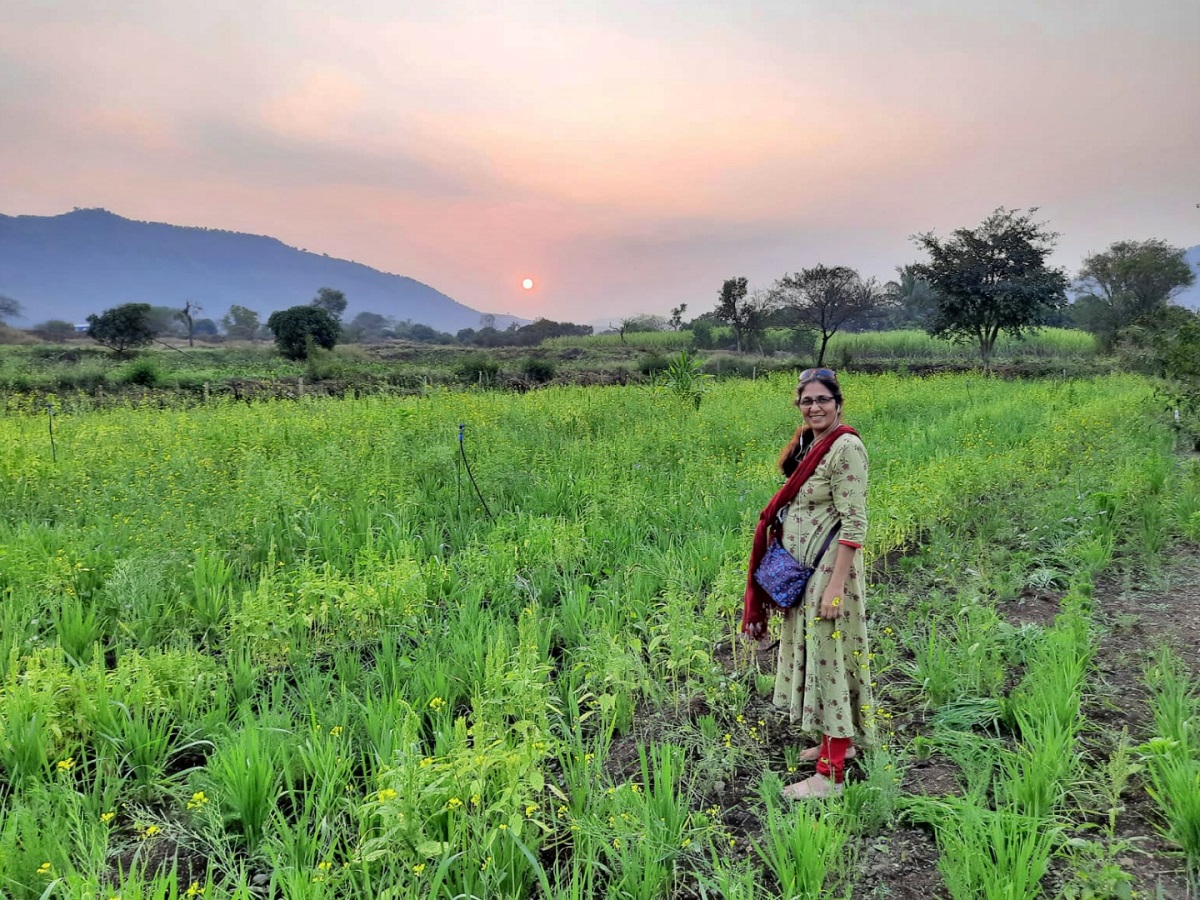 “When you invest in something, you are eager to gain returns as quickly as possible. Back then, I was an immature young person who felt this way too. In the first year, we could not grow anything. Though we sowed chickpeas (chana) and groundnuts, we got only one-tenth of what we used to get at the former land. Although we were ready for that, we did not know how to proceed further. My father-in-law also had never restored marshy land. We decided to follow our instinct and started removing excess water from the field. It seemed like the right thing to do. We read some informative books and articles and trained ourselves. Restoring cultivable land from a marshy state was novel to us and everybody we knew; so, we taught ourselves everything and set off on this mission to become self-sustaining,” explains Afrin.

Afrin had previously studied civil engineering. With the guidance of a few mentors, she designed and dug trenches around the land to channel the excess water without damaging the crops or soil. During the subsequent monsoons, the water that flowed down the hills began to take this meandering path they had created for it, which slowed it down before reaching the farm. This allowed the soil to absorb the water before it reached the water canal beyond the farm.

Afrin changed the landscape of her plot via practices that she had developed by herself. Further, she and her family increased the area of their farm by purchasing some land from their neighbours when they could. Now, the farm is a five-acre expanse with a water well that satisfies the water requirement of the entire farm for six to eight months. With water conservation via digging a well and channelling excess water to a pond, the water quality has been improving. Furthermore, the ecosystem is becoming visibly healthier each year with the return of several species of birds and insects that formerly inhabited these parts.

Growing her own food

When Afrin began learning to farm, chemical farming was expensive and unconventional. They used to have cows, and cow dung and urine were the only supplements they used. Though she knew about chemical farming and many people around them transitioned to practising it, she did not make the shift. She did not feel the need to shift because the yield obtained organically was sufficient for their joint family of close to 50 members. Furthermore, she recalls her mentor having explained that since their land was on top of a hill, their use of chemical substances would damage the lands below, thereby damaging the entire jungle. His words strengthened Afrin’s resolve to continue organic farming. In 2000, Afrin was working as a computer instructor alongside farming. However, when her first son was born, she quit her job. She had read a few articles on the harmful effects of chemical farming on human health, which had spurred her into action. Afrin decided that it was her responsibility to grow healthy food for her child and family and started growing food to meet their needs.

Now, Afrin grows six varieties of rice, and each variety has its own characteristics and nutritional value. Additionally, flax seed, chana, and millets such as ragi and little millet are grown every year. She has recently designed a mixed fruit orchard comprising mango, guava, custard apple, figs, and papaya and hopes to get fruits throughout the year.

Afrin initially sold surplus produce to a few of her friends. As she kept growing more food, Afrin set up SAAD Agronics in 2015 to sell her produce. SAAD Agronics was named after the initials of her family. As the demand for organic produce grew further, she collaborated with a few farmers nearby who were producing toxin-free food and experiencing difficulties with marketing the produce. She collects vegetables and fruits from these farmers and sells them from her home in Pune. She considers this her responsibility because it is helping the farmers receive a fair rate while the consumers pay a fair amount too (trade justice). Afrin is happy that she is in a position to help the people around her. She believes that toxin-free food can only be made available if these farming communities can sustain themselves. They are presently an informal collective of six farmers with similar ideologies on farming, and they intend to register formally as a collective. 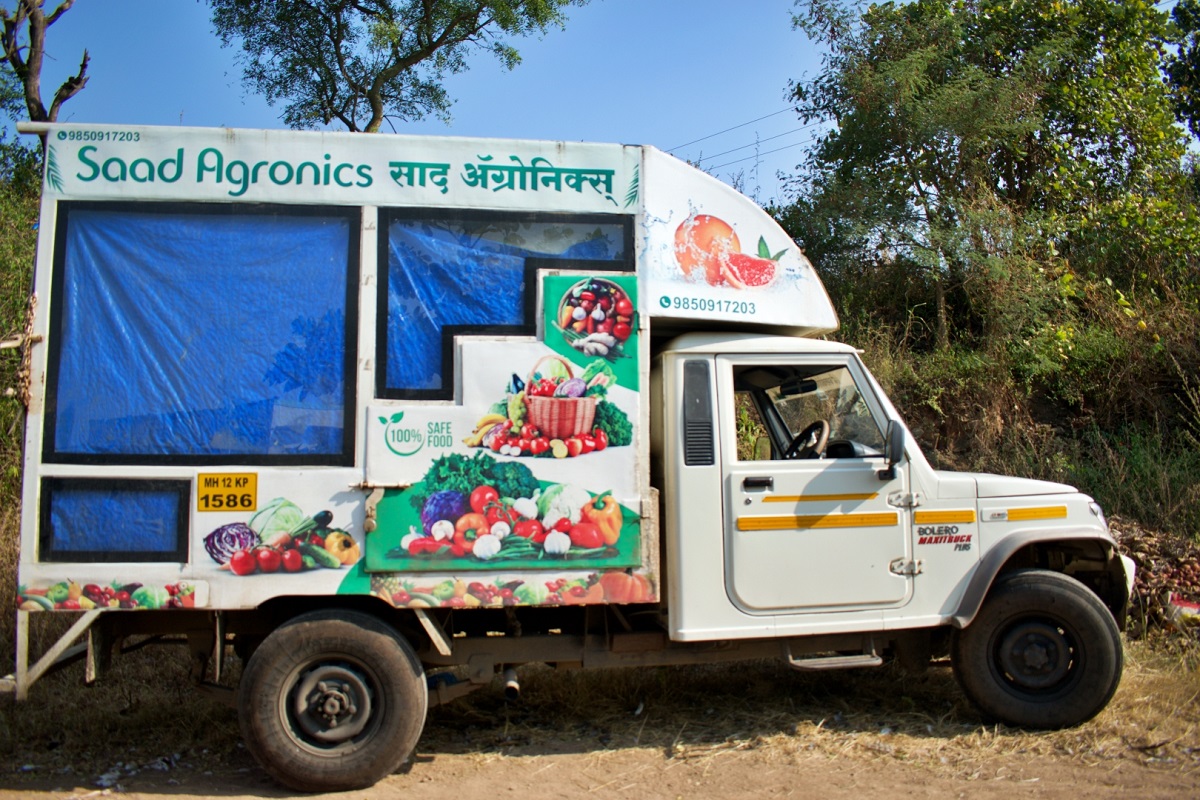 The aesthetic of regeneration

In Afrin’s farm, the top soil is mulched with leaves and surplus straw. In addition, there are animals such as cows and goats trampling over this mulch and mixing their dung and urine with it. Owing to this, the soil quality has improved significantly over time. Water seeps into the mulched soil and finds its way to the canals through the soil, leaving clear filtered water behind.

Afrin’s innovative practices have increased crop productivity. Productivity is not just measured by the output of a farm; it is the ratio of the outputs to the inputs. She discovered that they required fewer inputs with time, whereas the output continuously increased.

Different trees on the farm provide shelter for several species of birds, and the farm has become a bird watcher’s delight; one can spot peacocks here too. As one walks through this farm, observing the biodiversity, including the bees, birds, and butterflies that thrive in this ecosystem, one experiences bliss.

“I have been learning to farm for the past 24 years and practicing it for 15. Farming taught me patience; the urge to react impulsively has long gone. I never considered farming as a career during my years of formal education. Now, I don’t imagine myself doing anything other than farming. From then to now, the journey has been a rollercoaster ride and full of learning. Farming is a regenerative way of living. Every time a grain from the farm is sown, the resultant crop has been healthier than the previous one. I wish to continue working on my own farm and support other small farmers to recreate small communities of their own to live their own sustainable lives. I’m sure that the soil will be there forever; regeneration is a never-ending process. I will do it until I can,” says Afrin Kale.

Afrin Kale can be reached at: afrin.kale@gmail.com 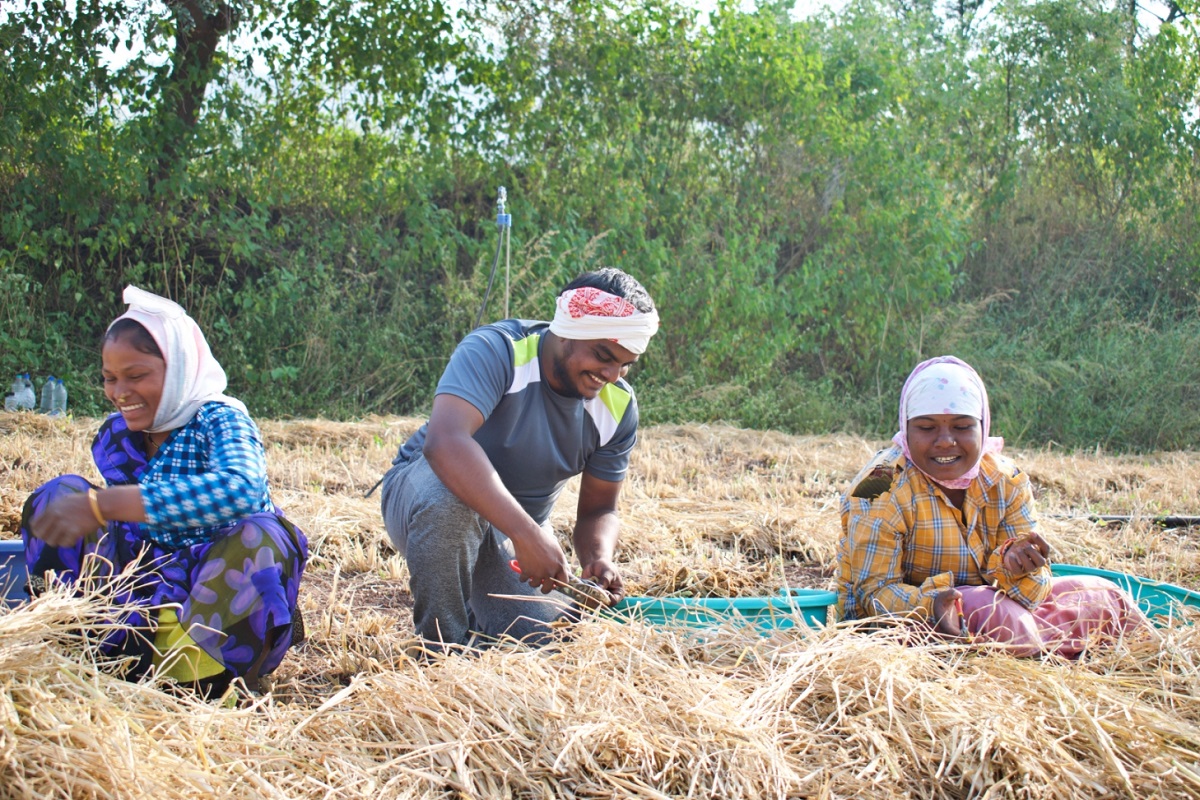 Teaser/SEO description: Afrin Kale, growing toxin-free food at the foothills of the Sahyadri mountain range near Pune: an outcome of Afrin’s passion and hard work.