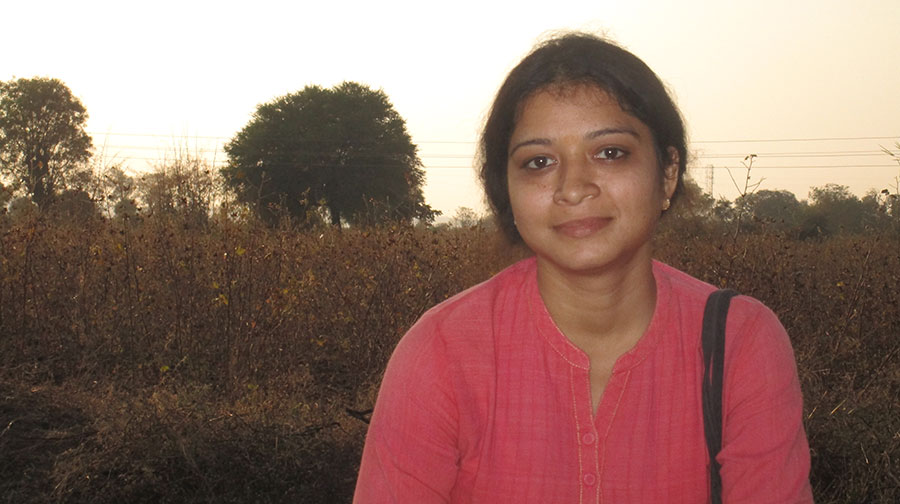 An artiste is a master of free thinking, and the artiste makes others experience this freedom through his/her work. This freedom, which an artiste talks about, is not in terms of the physical state of freedom but about the mental freedom that each one of us needs. For an artiste, killing a person’s thoughts is a bigger crime than killing a man because once a man’s freedom to think is murdered, the man becomes a tamed animal with no thoughts or opinions of his own. And even if he has some thoughts, he becomes unable to express them. Every artiste is, thus, fighting a battle for the freedom of expression. And when the artiste is able to involve the society in this battle, that’s the beginning of a change.

Our next ‘parinda’ has a similar story to share. Over the years, she has used her art and expression to raise awareness about various issues in the society, especially farmers’ rights.

In an effort to ensure better education for his children, Shweta Bhattad’s father left his land behind and moved to Nagpur. Though he had left farming, he couldn’t get the love for farming out of him, which also kept him close to his village. As a child when Shweta would accompany her father to their family village, she would notice the difference in her upbringing and that of her village friends. She would also notice that there wasn’t ever enough food in her friends’ homes, and wondered, “Why?”

“A famer is somebody who grows food and feeds others, then how can he not have enough food at his home?” she would wonder as a child, and conclude that maybe farmers don’t know how to manage their resources.

Time went by, she remained busy in her studies even though she didn’t enjoy it. “After my father would drop me off at my school, I would often run back home or hide at a neighbour’s house,” Shweta remembers, adding that maybe that was the reason I failed in Class XII.

However, Shweta has no regrets because that was the time when the seeds of art, which had been sown in her childhood, began to be nurtured by her and she realised her true calling. She finished her school, and went on to pursue Fine Art at graduation and post-graduation levels. However, she came across the same reasons, which had her running from studies, even in college.

During this period, she met some girls who had been victims of sexual harassment in their childhood. Their stories revived the memories of some incidents of her own childhood. That’s when Shweta decided to tackle such problems through her art. She designed some performances and presented them at different places. After college, she took up various art residency programmes in various villages of India, and realised that art can play a key role in involving the community for bringing about a holistic change.

All this while, Shweta continued to make occasional visits to her village. During these visits, she would think about doing something for the village but she didn’t know how or what. But it was the art residency programme that showed her a path, and she organised one in her own village to raise awareness about hygiene and cleanliness.

During one of these visits, Shweta realised that the youth is not interested in agriculture, just like she isn’t either. She remembered her father and his decision to move to a city, leaving his agricultural land behind. Shweta then started understanding the problems surrounding farmers and agriculture in depth, and in the effort she started farming too. She also designed a few performances to raise awareness about it.

Meanwhile, Shweta had gotten the opportunity to be part of the Climate Change Conference in Paris where she met farmers from various countries and learnt that farmers around the world are facing the same problems. Land mafia is a threat to farmers in India and abroad, the Indian government doesn’t do much for the farmers nor do the foreign governments, farmers are committing suicide in India and they’re committing suicide in Europe as well.

“You can imagine the extent of farmers’ problems by the fact that about 2,500 farmers are leaving the occupation every day in India or that more than 124 farmers have already committed suicide this year in Maharashtra alone. If the situation continues as it is, then there would be no farmer left in this agricultural country. Maybe that’s when we will truly understand the value of farmers because even we, like them, won’t have food to eat then,” she says.

“I believe food is a political, social and fundamental right. We’ve started a land art project in my village through which we are sowing seeds in a manner that they a particular shape. At the time of harvest, there would be different crops in different colours, together they will represent a shape or an image. I believe this is an interesting and attractive way of re-building a relation between the farmers and their land,” she adds.

A lot of people ask Shweta why her work focuses on land. She tells that that there are several dimensions to our tradition and culture, but if we go to the roots of it, we’ll see the farmers. And farmers are not just associated with food but are, in fact, extremely integral to sustain our ecosystem.

We must, therefore, give our farmers due respect and understand their importance in our lives, only then will we be able to save our farmers.