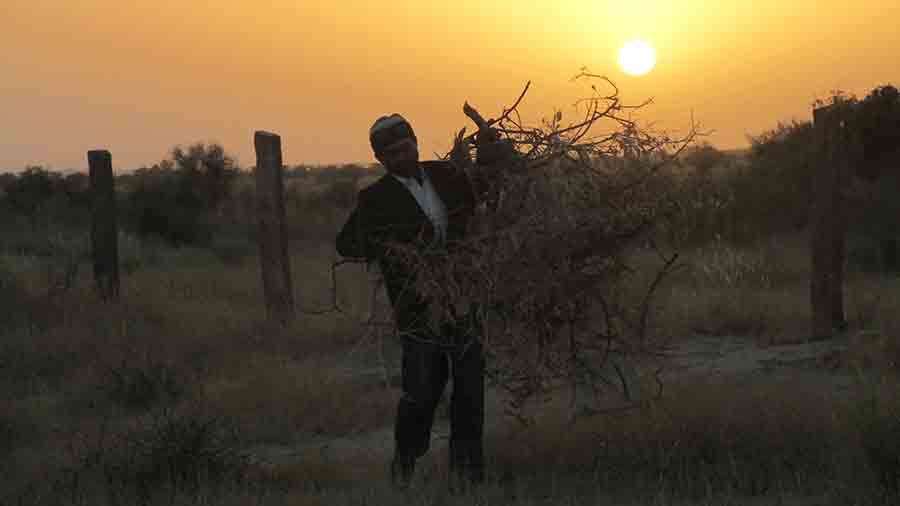 Born and raised in a small village in Barmer district, Khameesh Khan’s childhood was unlike any other child’s he knew. He was only 10 when he was struck by paralysis. This interrupted his education, and he was forced to spend a year on bed.

He tells me, “Just two days before I was left paralysed, I had planted two plants in the courtyard of my house. During my illness, these plants turned out to be my only friends. Most of my time was spent looking at the plants grow day by day. That’s when I realised the selflessness with which nature serves us, throughout our lives. Our lives start with it and end with it. There is no truer friend one can have than plants, and that’s how I fell in love with the two plants.”

During that one year, the illness was not the only thing Khameesh had to face. He also had to face the regular taunts of his relatives. One day, when he was much better, fed up with the nagging, he ran away from home to Jaisalmer. There, he washed tea cups at a small eatery. It was a very difficult period for Khameesh. In winters, he used to sleep in a sack of sugar to shield himself from the cold.

However, it was in Jaisalmer that Khameesh met a lot of foreign tourists and began to pick up English. He soon became a professional tourist guide but often missed the soil of his homeland and the two plants he had left in his courtyard.

One day, he returned to his village and established a shop for clothes. Everything was going well, his life was back on track and he was in the village he had been longing for so long until…Until the desert town was struck by a flood, and he lost everything he owned.

This, however, did not break him. He restarted his life in Jaisalmer with a restaurant which he decorated with beautiful plants. It was here that he happened to meet an Australian lady called Rosy Jordon who was amazed by Khameesh’s love for plants.

“She told me about a course in permaculture, and how it can help fight global warming,” says Khameesh, adding that it was Rosy who told her that the flood in a desert was also the repercussion of global warming. Rosy explained him that if he agrees to enroll for the course, Khameesh will be able to reform several lives. And so Rosy sent Khameesh to Tanzania to pursue a degree in permaculture, and bore the complete cost of his education.

In Tanzania, Khameesh learnt about the effects of global warming across the globe, and understood that the only way to revert these effects was to plant as many trees as possible. However, digging the ground and planting trees randomly will not help. One has to plant trees according to the geographical and climatic environment of a location so that it not only benefits the humans living in the region but also the wildlife.

Living in this part of the world is not particularly easy. Yet, for centuries, generation after generation has lived in India. However, if the rate at which climate change and intensive cultivation exists, continues; we’ll soon lose our cultural heritage. Modern-day development has completely destroyed our ecological system. In the olden days, our ancestors’ wisdom helped them live a happy and healthy life. They used those techniques in their daily routine that ensured no harm to the environment, this included saving every drop of water. Lakes, bore-wells and step-wells had water round the year in those days. But now, in this race for materialism, we’ve ruined our environment.

And so he returned to Jaisalmer and decided to protect the environment and fight this evil through Greening Jaisalmer Society, which he established.

“Getting water from another region is not a sustainable solution because that literally means that you’re quenching your thirst by drinking somebody else’s water. If that water runs out too, what will the inhabitants of that region do?” he asks, adding that he has, thus, made it his responsibility to create awareness about people in the village and promote traditional techniques of farming and rainwater harvesting.

He encourages people to plant as many trees as possible to improve the ecosystem, strengthen the local resources and create better jobs for the people.

“Through this effort, I’ve decided to bring about a change in the environment. At present, I’m working in a village, about 30 kilometres away from Jaisalmer, to set an example to tell people that it’s not impossible to grow a forest in a desert. And that’s just the beginning of some of my plans,” says Khameesh.