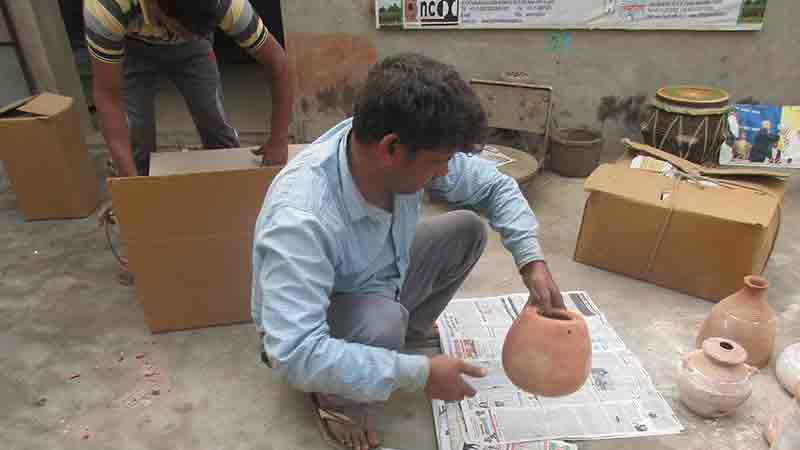 Brijendra Prajapati was never really interested in school. Instead, he was always more inclined towards traditional art, craft and even games like gilli danda and pitthu. By the time he reached Class X, he lost all interest in mainstream education.

He remembers that when he was in high school, he noticed that a lot of youngsters were migrating from his village to nearby towns in search of a job. Mesmerised by the razzmatazz-ness of the cities, these youngsters ended up doing menial jobs and giving very little time to their families. Every weekend, they would return home tired and leave again the next day for work. That is when Brijendra questioned if it really was worth doing a job that distanced a person from his family.

“If a person can’t give time to the people for whom he’s earning, then what’s the point of a job like that?” he asked. Brijendra also noticed that these people were being distanced from their culture, their village and their lands. And so, Brijendra decided to drop out of school and find a livelihood in the village itself rather than finding a job in a fancy city.

In his childhood, Brijendra had often seen his father working with clay and had learnt the art of pottery from him. The art that was a hobby for him, soon became his profession and his father became his guru. Brijendra started travelling across the country for handicraft exhibitions and fairs.

This gave him the opportunity to meet other artistes and see their work, and he realised that what he was doing was not just a means to earn a livelihood but his responsibility towards the society — to keep the art alive.

Soon enough, Brijendra started innovating. Until then, potters were only making matke, diye and kulhads. But with Brijendra’s ideas, the father-son duo started making almost every kitchen utensil and tool in clay. They were making frying pans, hot cases, plates, bowls, and tea/coffee mugs, among other things. In the coming years, the potter family went beyond the kitchen and started making lamp shades, toys, hukka and various decorative items. These were exhibited across the country and Brijendra was highly appreciated for his art. The appreciation soon turned into recognition, and the family began getting custom orders from across the globe.

However, Brijendra says that it’s not easy keeping alive the art and tradition of pottery. If the status of pottery continues to be as it is, the art might not live beyond the next 25-30 years. There are two reasons for this. One is that existent potters are facing a low market demand and suffering from poor economic conditions. The second is that the younger generation is no longer interested in learning the art and taking it forward. The story is no different in Brijendra’s house.

“The children in the house think that pottery is a messy work and poses a lot of health issues. But this perception is wrong. If you see the older generations, who have played and worked in clay, their immunity is much stronger than today’s children. Kids today start sneezing as soon as they get out of the house! They spend most of their time in front of the television or the computer,” says Brijendra.

Today, most potters don’t have enough and proper space to work. Heating the clay releases smoke, so the potters have to establish their workspace away from the residential area. When Brijendra’s business started expanding, he had to face the ire of his neighbours who were against the smoke being emitted. This forced Brijendra and his family to find a house away from the village community.

“However, nobody opposes the big factories that release poisonous smoke all day long in the name of development!” says Brijendra.

Unfortunately, even the government has given no support to pottery, and the urban population has almost forgotten about this art. Almost every household has a refrigerator and so they don’t need a matka to keep the water cool anymore, forgetting that mud is one of the most natural resources. Keeping water in tightly-closed plastic bottles for more than a few days, makes it harmful for the body. However, water in plastic bottles is commonly stored and bought today. Kulhads made of clay have been replaced with plastic cups and clay pans have been replaced with non-stick pans, which have been made with various elements and chemicals. Sadly, these plastic bottles and cups have made an entry into villages as well. People equate plastic with pride.

This materialism is not only leading to the slow death of the art of pottery but is also distancing the people from their roots and harming the environment.

It’s time people should think about what they want to leave behind for their future generations. Do they want to give them a healthy environment to grow in or force them to live in a poisonous one?

(Due to an unexpected death in Brijendra’s family, a video of him could not be recorded.)