If you are happy and you know it, plant a tree 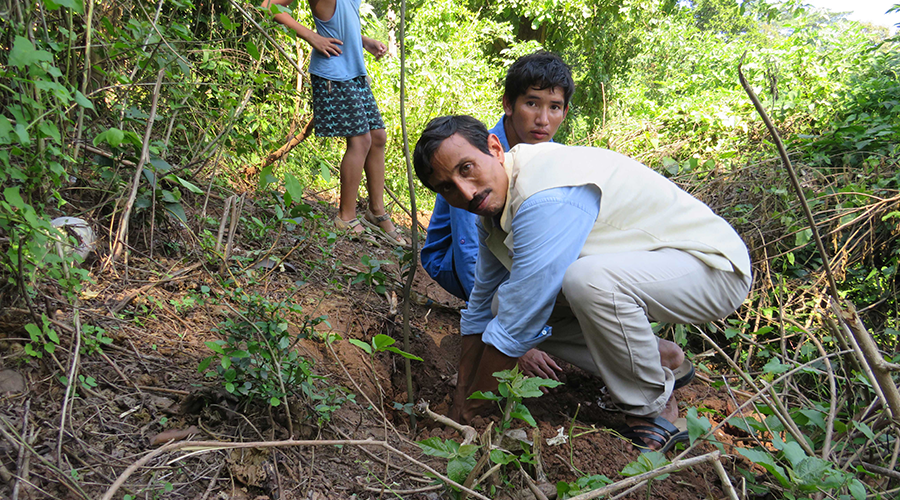 About two decades ago, there lived a young man in a small village of Bishwanath district of Assam who had begun to stay very unhappy because of rampant deforestation in his region. He was so disturbed that he was even seeing trees, forests and rivers crying in his dreams. It was one such nightmare that woke him in the middle of the night one day. That day, he decided to dedicate his life to nature and its conservation.

Our latest parinda, Bakul Gogoi, has a craze for planting trees. I don’t know how else to describe his love for plantation. Bakul started his journey of planting trees 20 years ago. He was studying in Guwahati at the time. As a student, it was very difficult for Bakul to be able to afford a plant from a nursery. So he used to save money from his food budget to buy one when he could and then plant it wherever he could find space in the city. But he knew this couldn’t be a long-term plan. He was about to finish college soon, and that would put an end to the money that his parents were sending him for his expenses. Bakul wanted to find a way to take this forward in a more sustainable manner; so he decided to start his own little nursery.

“We don’t need money to plant trees. A plant can produce seeds on its own; all we need to do is plant a few in the right places and nurture their growth so that pollination can take place. After that, it’s a natural cycle — a plant will give birth to another and so on and so forth. That’s exactly what I’m doing. We’ve received a lot much from nature, which has looked after our needs as a mother. Today, when it’s in a state of suffering, it’s our duty to help nature,” says Bakul.

To engage more people in this initiative of his, Bakul came up with an innovative idea. Whenever there a moment of joy and celebration at a house (such as weddings, birthdays or festivals) in his region, he would to that house with a few saplings and asks the family to plant it as a mark of good luck. Bakul says that when a sapling is planted on an auspicious or joyful occasion, it becomes almost like a living and growing memory of the day.

Speaking of memories, Bakul also requests grieving families who have lost a loved one to plant a tree in the memory of the person.

It’s because of efforts like these that locals call him ‘Ped Wale Baba’. Many seniors in the community have even given him the name of ‘Vriksh Manav’.

In the last 20 years, Bakul has planted more than 10 lakh trees. He now wants to take this initiative to an even larger scale. For this purpose, he is seeking help from the Assam state government to give clearance to two of his ideas.

His first request to the government is that at the time of school admission, the student must plant at least two trees, and the responsibility of looking after this plant should be with the same student till he/she graduates. Bakul says that if people spend time amid plants and trees at a young age, they develop an automatic bond with nature, which makes them more aware and conscious of their natural surroundings even as grown-ups.

His second request to the government is to officially declare the day of Bihu Mahotsav as ‘Tree Plantation Day’. Bakul says that Bihu culture and festivities have deep roots in nature but we’ve largely forgotten about this relationship today. In fact, in the name of festivals and celebrations, we’re doing some activities that are actually harming the nature.

This makes it all the more important to keep alive our dying traditions and culture; and to rebuild the bond between humans and nature. Otherwise, it won’t just be the end of traditional culture but of humans too.