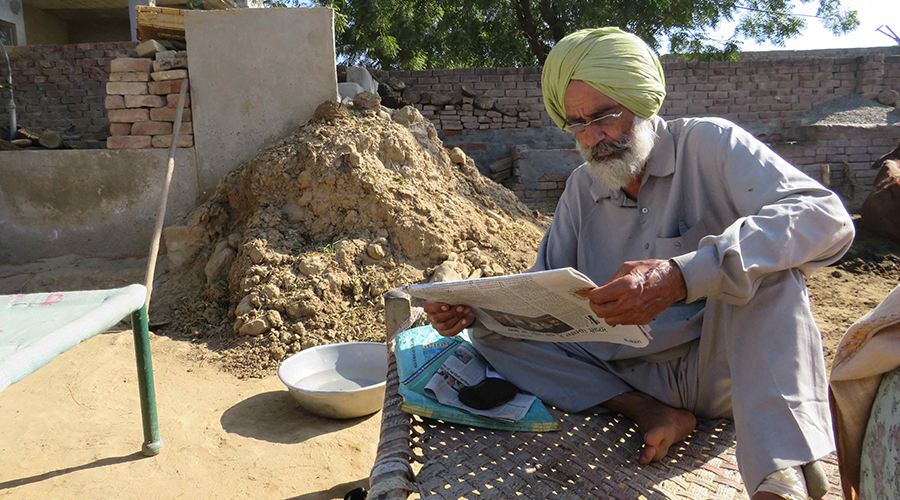 The time when farmers were the boon for Punjab is a thing of the past now. Reality is that a farmer is curse for Punjab today. The entire state, in fact, is suffering from the consequences of the Green Revolution. The same farmer, who was the provider for the nation until a few decades ago, is now being forced to kill himself due to the lack of grains to even feed his family. During the Green Revolution, the farmers added so much poison into the ground that the poison has now entered our bodies through the food they’ve grown and we’ve eaten. The health situation has gone so bad in the state that a train has been named ‘Cancer Train’ as 60 per cent of its passengers are cancer patients.

In the last 50 years, the farmers of Punjab have broken all ties with nature; and in doing so they have cut the same branch of the tree that they were sitting on. The state through which five rivers flow is today a thirsty state.

The initial results of the Green Revolution were quite surprising. By banking on this initial success, the government and the corporate-agriculture sector fooled farmers across the state.

The last story in this 52 Parindey series is about a farmer who, too, has been a victim of the Green Revolution. Amarjeet Sharma is a farmer who hails from Faridkot district in Punjab. When Sharma took up farming as a vocation 40 years ago, he started with adding poison to the soil. For 30 years, he continued to spray chemical fertilisers and pesticides on his land. In the greed for more output and more profit, Sharma even turned to cash crops. However, the profits did not continue to come in for long. In 2005, his entire lot of cotton failed; and he fell into a big debt.

Sometime later, when the government was carrying out field trials for BT cotton, he put faith in the government’s initiative and decided to grow BT cotton in his field. He had been told that this crop would not be infected by insects. He did as he was told, added the medicines he was asked to add to the soil, deployed the same techniques that he was told about. He followed step-by-step instructions that were given to him. Yet, his entire lot failed him again. When he ran around for help, no government department or seed/medicine-making company offered him compensation or help of any kind. One of the consequences of this major loss was the suicide of Sharma’s son — a loss he still can’t get over even today.

“Chemicals have destroyed our lives. Everything from our soil and air to our water and food is polluted today. The more the government has promoted modern techniques of farming in the state, the more our state has gone down the drain. There are hardly any farmers who grow indigenous crops or use traditional seeds,” says Sharma.

It was a little after this realisation that Sharma joined the Kheti Virasat Misson, a movement that is working to promote organic farming in Punjab. His association with this movement helped him return to his roots and his soil through traditional and organic methods of farming.

“Paddy requires high irrigation, if you add the cost of water to the total input cost of farming, an acre of yield will earn you three to four crore rupees. But this water has no economic value for us, and so we have destroyed the water bodies too. The situation has become such today that people in Punjab, home of five rivers, are being forced to buy bottled water. What could be more shameful for us?” asks Sharma.

Today, Sharma grows more than 70 traditional different crops in his field, which has helped revive the quality of soil in his field. He even conserves indigenous seeds and promotes their use among other farmers. He addresses different groups of farmers to talk to them about the importance of retuning to organic farming.

“If a farmer adopts the traditional model of agriculture, he will be able to meet all the needs of his family from grains and vegetables to spices and clothes,” Sharma tells other farmers.

It’s not just the greed of the farmers but the greed of the state government as well that is responsible for the destruction of Punjab. It is necessary for both parties to accept responsibility for this. If Punjab has to be saved, farmers will have to return to their traditional practices of agriculture. Farmers will have to create a new crop cycle. Farmers will have to reestablish their bonds with nature. And none of this is possible until the farmers step out of the Green Revolution chain. On the other hand, the government will have to establish research centres across the state and the country to promote traditional farming; and ensure that the farmers are involved in the state-level dialogues and policy-making.

A farmer understands the nitty gritty of farming. Those who wear ties to work, sit in fancy offices and live in big bungalows cannot understand the realities of agriculture.