The nation’s lungs lie in the Himalayas 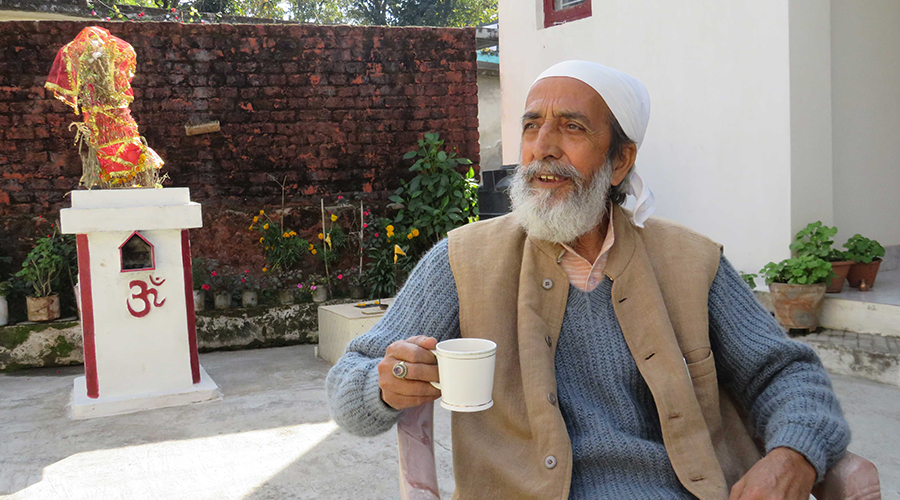 Our latest parinda is from a village called Kamla in Himachal Pradesh. For the last 40 years, Kulbhushan Upmanyu has been working tirelessly towards conserving and protecting the environment in the state.

Even during his college days, Upmanyu never liked the word ‘job’. To him, a job seemed like just another form of slavery. So when he graduated from school, he decided to look after a piece of agricultural land. At that point of time in his life, Upmanyu saw farming as the only occupation where he didn’t have to bow down to any person or institution. Even though, at that time, a Class XII degree meant a guaranteed government job, he decided to stick to farming.

While managing the crops on his land, Upmanyu started an enterprise of processing the harvest, followed by setting up a small grocery shop. However, he soon lost interest in the shop because he realised it’s almost impossible to do a good business without lying. He had even begun to question the economic benefits for which had established this small business. He felt even business had become a form of slavery of the modern world; and so he even closed shop soon.

However, he felt a strong urge to do something for his village. So he got together with some village men and women; and started a village redevelopment group in 1973. Through this group, Upmanyu started finding solutions to the village’s various small problems by solving them at the village and community level. He believed if every problem of the village could be solved within the village, without the need to beg in front of a government official, the village will be able to become self-sustainable. His efforts gave birth to a strong sense and feeling of community-hood in the village. Happy with his efforts, he then replicated this initiative in 10-12 nearby villages.

One of the greatest achievements of his efforts has been the complete eradication of caste-based discrimination in these villages. On the other hand, he continued to make efforts at strengthening the cottage industry-based local economy. However, he soon realised that the problems he was working on were actually much bigger. He was unable to gather enough strength to fight these challenges; and so he decided to focus all his attention and concentrate all his power on one problem rather than on multiple issues.

Around that time, he came across an article on Sundarlal Bahuguna of the Chipko Movement. After reading that article, Upmanyu felt like he had found a reason and aim for his life — to protect the Himalayan and Himachali environment. He could see that the reasons and ideas of safeguarding a jungle were applicable for safeguarding a village too. A village is dependent on the forest for a lot of its needs. And so Upmanyu got in touch with Bahuguna.

In 1981, Upmanyu set out on a journey with the Chipko Movement in various parts of Himachal Pradesh and Uttarakhand, where they addressed village men and women. He’s been a frontline campaigner in raising awareness about forest and forest conservation. The Himachal government was at that time adamant to destroy the natural forests and replace them with pine and eucalyptus trees, which were not ideal for the nearby flora and fauna or the ecosystem of the region. Despite threats to the local environment, the government wanted to grab the economic benefits from the region and so it was planting these trees at a mass scale. This led to a major fodder crisis in villages, which were dependent on these forests for food for their cattle.

Upmanyu then came up with a slogan against the government move: “Cheed, safeda band karo; chaare ka prabandh karo.” (Put an end to pine and eucalyptus; bring fodder back). Along with the slogan, he started taking out several processions and participated in many demonstrations. During this struggle, he even had to spend two months in a prison.

The sheer strength of this movement can be gauged by the fact that the slogan is still on people’s lips, 30 years later. Their collective efforts have reaped amazing results. No eucalyptus tree can be planted anywhere in Himachal now; and even pine can only be planted in areas that are away from populated areas.

Ever since then, Upmanyu has continued his efforts. He has even joined hands with various organisations in the state and created a common platform for them under the banner of Navrachna. Through this platform, the consortium of individuals and organisations voices its opinions about the unfair policies of the government; and helps the government frame new policies.

It is said that the current Himachal Pradesh forest policy is extremely complex, which makes deforestation acts quite difficult in the state. This is one of Upmanyu’s achievements that the government was forced to rework on its forest policy and come up with a stronger one.

“Despite so many efforts and achievements, the government often finds some way or the other to fell tress. This is the reason our fight is still on, 40 years after we started it. Today, the fight incorporates many other environmental issues such as water, air and development. We are now pressuring the government to come up with a holistic Himalayan Policy. While our fight is to primarily protect Himachal Pradesh, we must understand that more than half the country’s weather and ecosystem is dependent on the Himalayas. If the Himalayas are destroyed, it won’t take long for the country to be destroyed. The Himalayas are the lungs of this country; if the lungs stop functioning, the country will not be able to breathe,” says Upmanyu.