Kanavu: The Home of Scintillating Butterflies 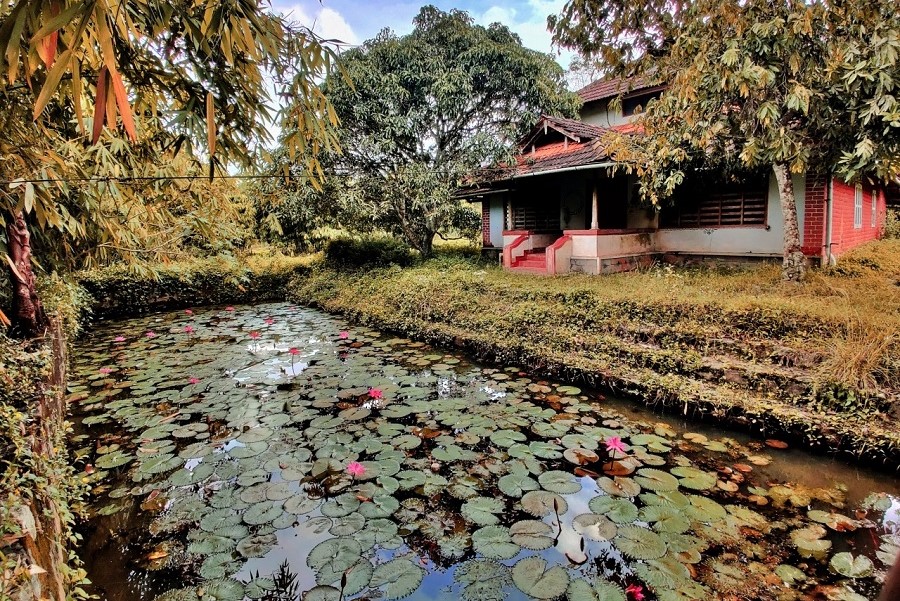 “It was life at Kanavu that inspired me to start Gothrathalam. Without Kanavu, today I would be living as a drop-out student. I pass on to the children what I had learnt from Kanavu.” 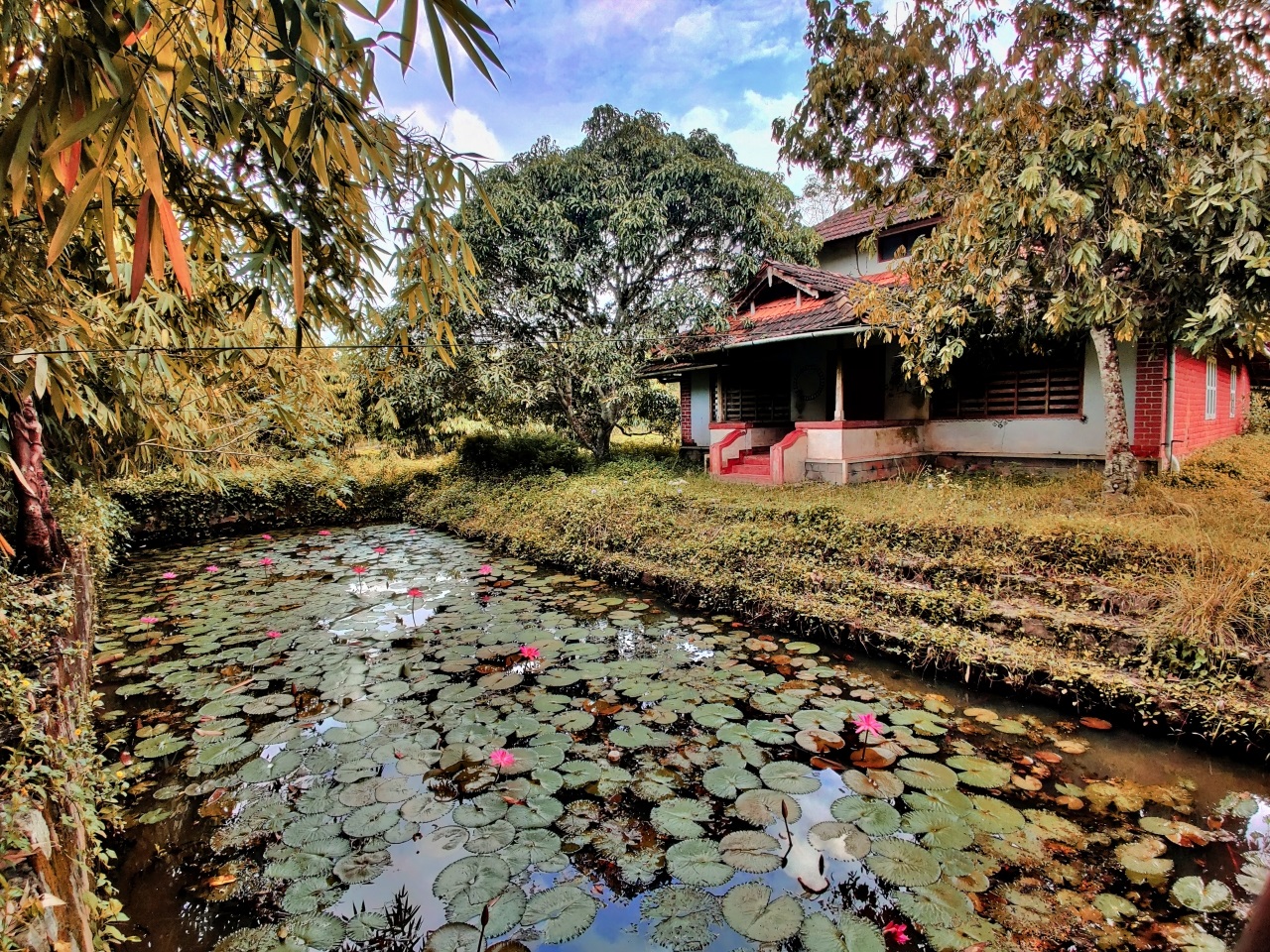 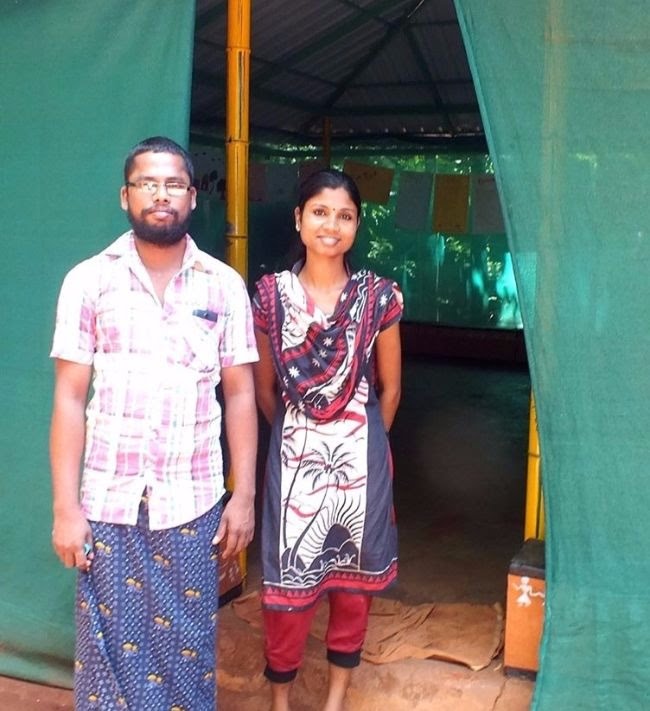 The journey of an exceptional change started when Mini and Sudhi got married in 2011. It was along with Sudhi, Mini shifted to Ravi Nagar Colony near Kanjiramkulam. There are 58 families in Ravi Nagar that belong to the sub-caste (gothram) called Vedar and most of them survive on daily wages. The colony majorly faced problems like alcohol abuse, substance abuse and domestic abuse. Also, Mini started noticing that the children had to face huge difficulties when it comes to their academic progression. Mini started thinking about bringing all that she lived and learnt from ‘Kanavu’ to the children of Ravi Nagar colony. This thought led to the establishment of ‘Gothrathalam’, an institute for alternative education, in 2012. Before its establishment as an educational space, it was a space for folk music which was set near their house. Initially, the main objective of Gothrathalam was to reduce the drop-out rate of Dalit-Adivasi students through reinforcing confidence in them as well as their skills. The classes were majorly focused on spoken English, personality development, socio-political awareness through skits and role-plays, and were scheduled for every Saturday and Sunday.

Moreover, they have organised numerous camps at various places to help the students with socially relevant subjects like sex education and gender equality. Gothrathalam, as an educational institute, gave equal importance to these subjects, which goes hand in hand with the concept of Kanavu. ‘Bhranthu Kali’, a play directed by Shyam Raji and performed by the students of Gothrathalam received huge recognition. It was a satirical play based on the fable of a fox who took advantage of internal conflicts among goats to feast on them, that lined up with the contemporary socio-political context.

After one year of Gothrathalam’s establishment, Mini was selected for a scholarship-based on the leadership training by ‘Kanthari’, an organisation committed to empowering social visionaries. A year of vigorous training became the core strength of the institutional progression at Gothrathalam. By 2015, Gothrathalam started gaining the attention of mainstream media. Articles were written and published, the focus of most of them being a girl who grew up under ‘Kanavu’ setting up another alternative education institution.

However, the constraints of space and money following the construction of their house forced Mini and Sudhi to shut down the initiative in 2018. The helping hands of their friends and loved ones had an immense impact on the working of Gothrathalam, as they were not receiving any income from the work. Additionally, Mini took Kalari classes in private schools and Sudhi provided treatment at houses and in private hospitals using an indigenous system of medicine in order to meet the expenses of the organisation as well as their domestic expenses. Travelling was a major tool for learning at Gothrathalam. Every student had a piggy-bank in which they collected money, which was used for the travel expenses. These were ways by which Mini and Sudhi tried to manage their financial crises.

Sudhi and Mini met in 2003 at ‘Mitraniketan’, an organisation based out of Thiruvananthapuram, which imparts development education to marginalised sections of the society. A friendship and love of eight long years paved the way to their wedding. Sudhi was involved in various tribal protests from the period of his academia. In addition to that, the travelling to tribal areas and understanding and engaging with the obstacles they faced were part of Sudhi’s life. At present, Sudhi focuses on sharing his knowledge of indigenous medicine to the next generation for the safe preservation of the native medicine culture.

“I have travelled a lot. Even though I have visited many schools during those journeys, I could never find something like Kanavu.”

The origin of Kanavu is an interesting story in itself. Renowned playwright and film director K. J. Baby and his wife Sherly Joseph are the founders of this organisation. The present space of Kanavu was once a drama training academy. The hiding spot of Mini and her friends when they skipped school is the actual home where Kanavu came to life. Even though K. J. Baby tried several times to send the kids to school, but they ended up as failed missions. Pondering over their refusal to attend school was the wings to the dream called Kanavu.

Mini was born in a Paniya tribal community in Wayanad and studied in a government school nearby. Mini stopped her studies when she was in fourth standard due to the constant harassment from her classmates and teachers. The continued harassment and avoidance from them aimed at her tribal identity was everyday part of her school life. “Even now, the sight of that school makes me anxious,” Mini adds. At home, they spoke ‘Paniya’, their native language, and Mini got her exposure to Malayalam from the houses where her parents worked. However, that language was filled with hostility and oppression. “I have only heard Malayalam in a way which established communal dominance,” Mini said. This created a fear in her whenever she heard Malayalam in her school. Lack of pens, books and uniform added to the reasons for Mini to quit school. “Today, the situation has changed. If a student does not attend school, the ST (Scheduled Tribe) Promoter of the area visits their house and investigates the situation. In earlier days, this wasn’t the case.” She added.

Later, Mini came to Kanavu. “Kanavu, the word itself means dream and this was indeed a dream. Handcrafts, dance and songs attracted me to Kanavu. Those are the things in our blood, right?” says Mini. Mini was just one of the many at Kanavu, who left schools on the basis of similar reasons. Kanavu was an idea that evolved from such minds which gave a lot of importance to Art in the academic spaces. The art-based learning at Kanavu comprised of Kalari, one of Kerala’s traditional martial arts, indigenous and folk art forms, Bharatanatyam, Hindustani dance and music forms, pursuing musical instruments and many more. 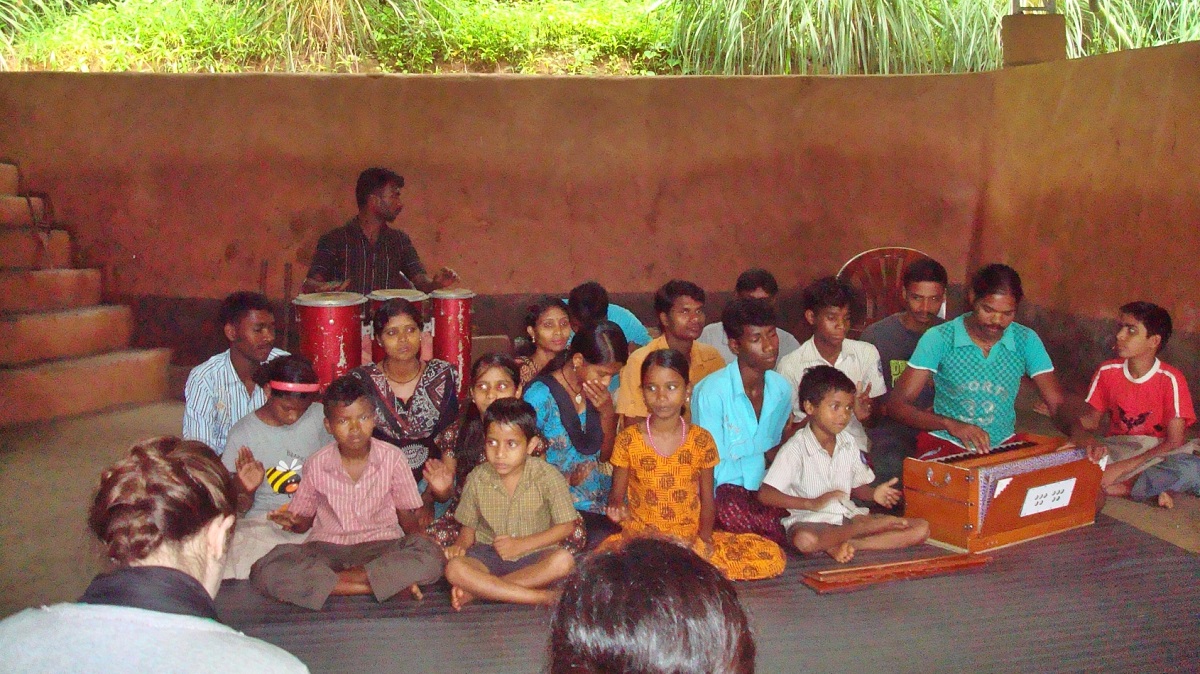 Children at Kanavu from their music class (File photo)

Kanavu stood different due to their unique approach towards teaching subjects. They did not allow learning to be constrained by the four walls of a classroom; instead, encouraged learning through experiences. As part of this, they travelled to various alternative learning spaces with their children. Kanavu had a unique way to categorise their students using the level of perception as criterion regardless of their age or educational history. The children resided together at Kanavu as a family, and they used self-cultivated vegetables and grains for cooking. Even the visitors to Kanavu would become facilitators by sharing their experiences and knowledge with the children. 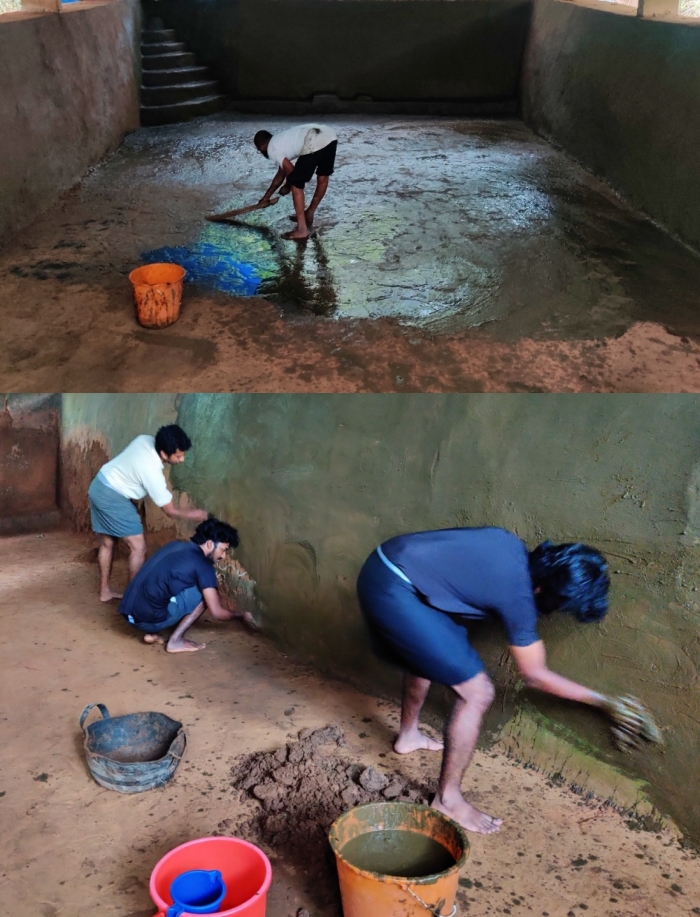 Kanavu has created the vastness of a sky for their children to dream. Even though Kanavu is no longer functional, Mini and Sudhi are sincerely trying to revive it from its dormant state to its original glory. At present, they have revived a Kalaripura which stopped its services years back, and restarted teaching Kalaripayattu. They have also started providing training indigenous medicine systems. The income generated from this is used for the educational purpose of the children of Gothrathalam as well as for the treatment of those who got injured during the Tribal protests. Sudhi and Mini live a life that is very close to the rest of nature, and the leaves of edible plants from their surroundings are a part of their food. 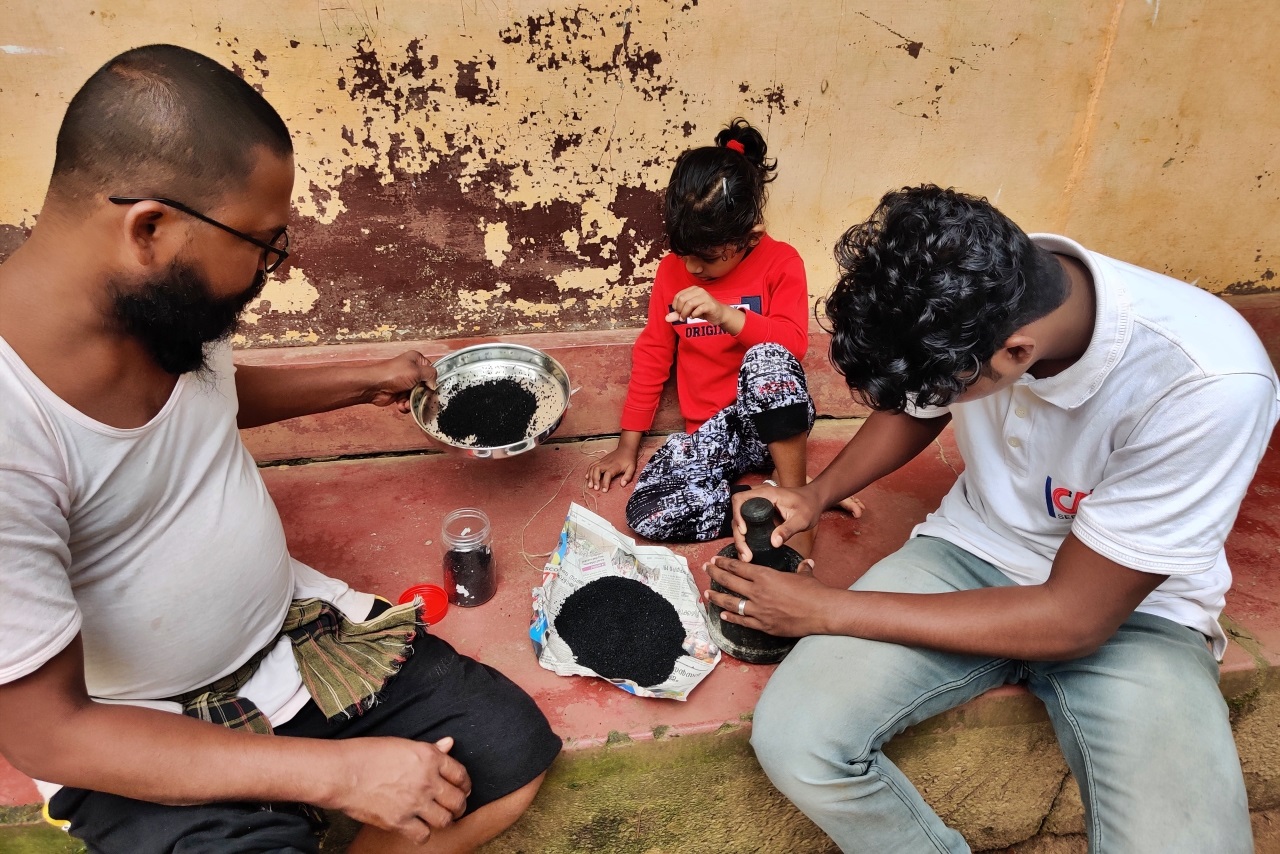 Story of Mini’s life that began from Kanavu and her return to the same place for its revival is inspirational. While a majority shrinks into forgotten islands winding themselves around a world of their own, Mini marks her significant space through the journey of her life. Sudhi and their five years old daughter Ekthara are her pillars in this journey. “We are not concerned about her education as she is learning a lot of new things along with us,” says Sudhi. Life and education are not two different things and that is the concept they live with and are trying to show to the world through Ekthara.

Mini and Sudhi can be reached at: ekthara123@gmail.com 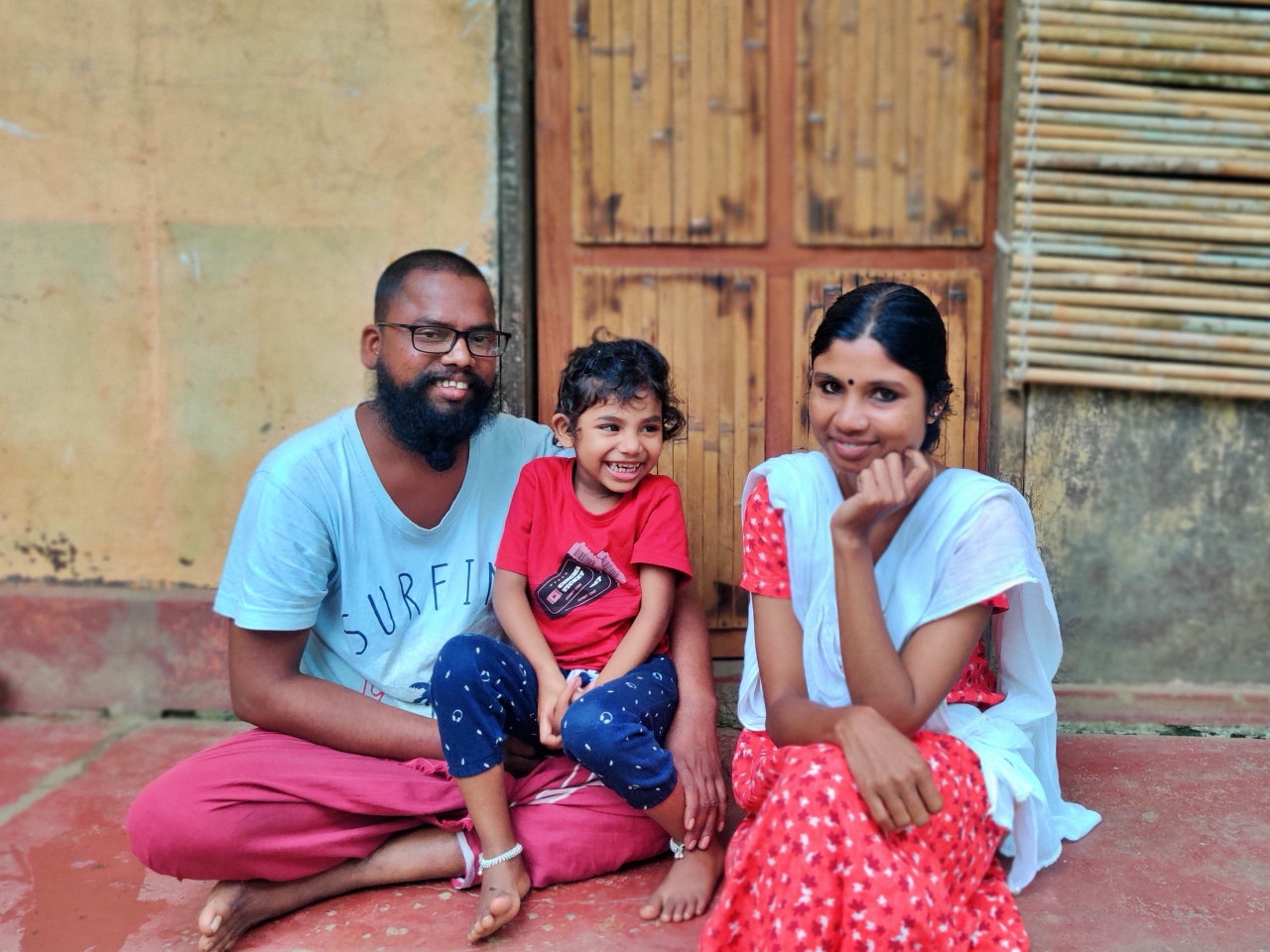 Teaser / SEO description: The life journey of Mini and Sudhi, a couple working for the education and upliftment of Adivasi-Dalit students.