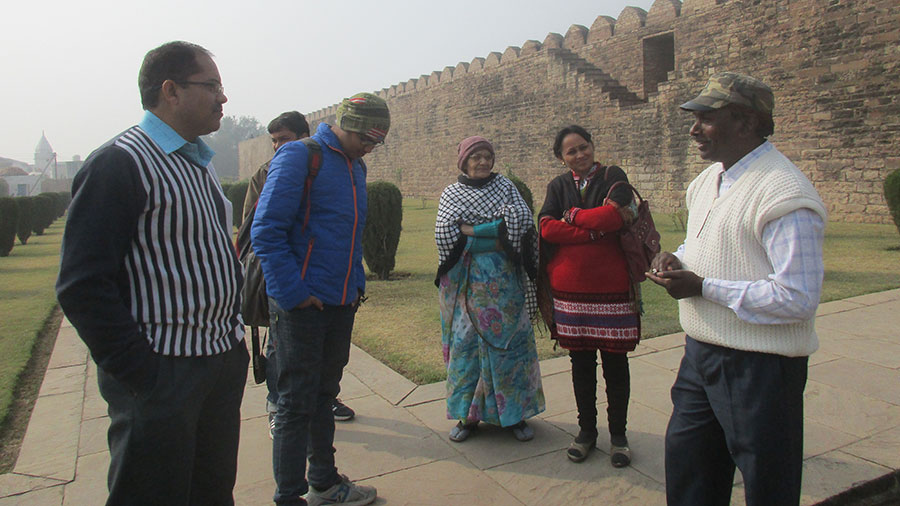 Though this story is about Kalle Bhai, it is also about all those children who are forced to “grow up” and mature too soon to earn a living for their family. It’s about those children who, in their childhood, learn about the good and the evil in this world. Despite the hardships that they face in an early age, they never lose their innocence of their childhood.

If you ever take a close look at them, you’ll notice that the everyday challenges of their lives are not able to curb their smiles, their laughter or their excitement. They will always find time to fool around and “be children”. These kids are as ignorant, innocent and understanding as any other child of their age group. So how do you know when a child has “grown up” and left his childhood behind?

Well, that’s hard to say. But what I know is that these children need the right education. Indian mainstream education shows these children the path that they must take but what they need to learn is how to walk first. If they know how to walk, they’ll be able to find their own way and their own destination, just like Kalle Bhai did.

There was a time when Muzaffar Ansari aka Kalle Bhai lived in a small hut, in Chanderi (Madhya Pradesh), that didn’t even have a door. There were days in his childhood when there wasn’t enough food in the house to feed every member. On those days, fruits grown in the wild used to be his only meal. In a financial situation as his family was in, it was difficult to think of even sending children to school. However, Kalle Bhai studied till Class V. When he was promoted to Class VI, his father didn’t have the money to buy school textbooks immediately, so Kalle Bhai requested his teacher to allow him few more days to arrange the books. However, the teacher insulted Kalle Bhai and refused to give me extra time, following which Kalle Bhai decided to drop out of school.

At the young age of 11, Kalle Bhai had started working at a general store to earn for his family. It was here that he found a guru in his employer who taught Kalle Bhai to read and write.

In his childhood, Kalle Bhai had also heard a lot of stories about Chanderi’s history and culture from his maternal grandfather. Listening to these stories, he developed a keen interest in history and came across a book called Chanderi: Ek Parichay. While reading this book, he found several contradictions between what he was reading and what he had heard from his grandfather. The curiosity to find the truth led him to the depths of Chanderi’s history. However, stepping into this deep ocean of history wasn’t easy for him. In his research, he found hundreds of inscriptions across Chanderi but all of them were in different scripts. Kalle Bhai, however, only knew Hindi. Eager to decipher the inscriptions, Kalle Bhai began learning different scripts. Today, he can read and write in 10 scripts. Not only that, he has also authored several books on the history of Chanderi. In fact, many scholars across the world have read his work, and several students have submitted their PhD thesis on Chanderi under his guidance. All this, despite the fact that Kalle Bhai holds no degree or diploma, he didn’t even finish school.

Over the years, Kalle Bhai has become Chanderi’s favourite man and a history book! He picked his passion of history and converted it into his occupation. He is now a certified tourist guide, who is extremely popular among foreign tourists. Kalle Bhai is also a calligrapher, an artist, a handloom activist, a numismatist and a historian, of course. In fact, so much is his love for history that he has led several excavations in Chanderi, especially in Raj Mahal, independently (or asked INTACH to carry out an excavation). It was during these excavations that he found several ancient coins, utensils and pieces of Chanderi’s history.

It was while reading up about the history of Chanderi that Kalle Bhai also learnt about the ancient lifestyle which highly impressed him. He understood how the town had evolved, and how its people had very intelligently and consciously built it, using only the locally available material such as stones from the surrounding mountains. And the mountains weren’t just carelessly broken down. There was a thought behind it. They chiseled those parts of the mountain where rainwater could be collected. This ensured that if there was no rainfall some season/year, they could use the harvested water. In case of excess rain, they could easily divert the water into the river without letting it overflow into the town. The people of Chanderi had created a system within the environment so that all their needs could be met without harming the nature in any manner.

Unfortunately, urban planning today hardly is all about erasing the heritage and replacing it with concrete jungles.

“Do you think the recent Chennai floods was a natural calamity? No, it was a manmade disaster. For the sake of the city’s development, river banks have been covered with cement. Our ancestors consciously left a path for flowing water but we have erected houses over it today. Now that we have ignored our ancestors’ knowledge and destroyed our nature, the nature has to take its revenge too,” says Kalle Bhai, adding that the younger generation doesn’t understand this. “They just call our ancestors ignorant and superstitious. However, that’s completely untrue. Our ancestors were, in fact, far more connected with the environment than we are, and not just physically but even spiritually,” he adds.

To prove his point, Kalle Bhai gives the example of various ancient civilisations around the world. Gods and goddesses were always symbols of nature. Somebody worshipped the sun, somebody else worshipped the moon. The ocean had its own god and rain had its own.

“Do you think all of these were just stories? No, these promoted respect for the nature among the people,” says Kalle Bhai, quoting Lord Shiva’s family. Lord Shiva carried a snake around his neck. His sons rode on eagle and rat, respectively, while his wife Goddess Parvati’s vehicle was a tiger. Shiva, himself, rode on a bull. “If you think of it, all of these animals are each other’s enemies but they lived together.”

Nature says the same! We’re all connected to each other. However, today we have forgotten the morals hidden in these mythological stories, and have disconnected ourselves from nature. Thus inviting our own destruction.

What we need today is to understand the knowledge that our ancestors held and use that information to save our culture and our heritage. This is the path that if we take, we can conserve our planet and protect our nature.