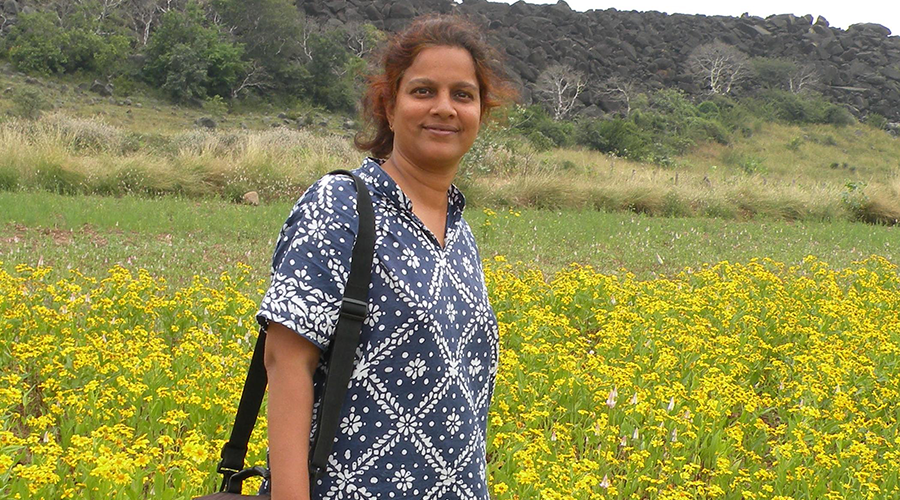 When one lives amid nature, then one doesn’t need to make too much of an effort to build a relationship with nature. Lush green trees, a variety of colourful flowers, the sweet voice of birds, fresh air, pure water and so much more — things that are so beautiful that it’s hard to find words to describe them — attract us towards them. It is because of this natural attraction that we often develop a bond with nature and realise that we’re not very different from it. We’re, in fact, a part of it, and our existence is incomplete without it.

Our latest parinda, Saraswati Kavula, didn’t have to do much to establish a close relationship with nature either. As a child, Saraswati grew up around nature’s wonder and beauty in a small town called Nalgonda in Telangana (then Andhra Pradesh). Maybe that’s the reason her interests started leaning towards spirituality and philosophy. At a very young age, Saraswati had pertinent questions about the purpose of life and its objectives. She would often ask if there was more to life beyond schooling, marriage, job and kids.

“I was frequently scolded or even hit in school for not completing my homework. As punishment, most of my time was spent outside the classroom. On the other hand, there were a lot of Left-winged people in the area I lived in. So, at a very young age, I had become aware of the difficulties and atrocities that people from backward, disadvantaged or poor backgrounds faced,” Saraswati tells me. “When I moved to Hyderabad later, I got a chance to read Vivekanand. After reading about his vision, I began to lose interest in school education but gained a lot of inspiration in doing something for the country and its people. I thought I would become a doctor and help people in need. However, I was never good at studies and so I couldn’t make it to a medical college. Or maybe it was that time of my life where I wasn’t sure what I wanted to do in life. I was completely lost; and I couldn’t see the road ahead. For the sake of my maa and papa’s happiness, I enrolled myself for a hotel management course. Though it was not what I wanted to do, I ended up finishing my course and landed myself in a job. That job showed a new direction to my life.”

As part of her job, Saraswati had to clean toilets, wash the bathroom and do all kinds of chores. This gave her an opportunity to understand the work that is usually assigned for the lower sections of our society; and she began to appreciate their efforts. That’s how Saraswati began to tread on the path to self-realisation.

After stepping out of the hotel industry, Saraswati went to England to pursue media studies. There, she faced a lot of problems related to food, which put her into a research mode. During her research, Saraswati learnt how fruits and vegetables are injected/sprayed with poisonous chemicals in India to ensure their preservation, following which they are exported to developed countries such as the UK where they are sold in supermarkets. This realisation made her question ‘development’ and its effects. However, despite this realisation, she couldn’t do much about it at the time because she had to return to India and pay back her education loan.

When she returned to India, she worked in the sector of commercial cinema for a while but how could a rebellious spirit like her’s last in such a space. And so, she once again stepped out of that profession and ventured into documentary film-making. She made several documentaries on various social issues. During the making of these films, Saraswati got the chance to visit several Indian states and came face to face with many ground realities that changed her way of looking at the world.

Following this, Saraswati associated herself with the National Alliance of People’s Movement and actively worked for various social movements. Through these movements, her belief in alternate social systems began to grow. She was able to understand the strength of/in decentralisation, local economy, labour, farming and small scale industries.

At that point of her life, Saraswati also wanted to buy a piece of land, too, for farming. And she did began to do that. During the same phase, Saraswati worked with some weaver communities in Andhra Pradesh as well. She wanted to bridge the gap between the weavers and the end customers, she tried various things but they weren’t really successful. After another one of her efforts failed, she came up with the idea of establishing the Handloom Weavers’ Market, which has been successfully helping the weavers of Andhra Pradesh and Telangana for the last two years now. The Handloom Weavers’ Market facilitates the transfer of handloom produce directly from the weavers to the end customers. This not only helps create a much needed identity for the weavers’ products but also enables them to get the right price for it.

“After trying my hand at various professions, I think my search has finally ended here. However, my journey will continue. When I look back at my life, I feel that I’ve done various jobs which I either did not like or I wasn’t meant for. But all of them — and my experiences in life — have helped me become who I am today. I have learnt a lot from my experiences and I continue to learn even today. And this journey of learning will continue. What is of utmost importance is the fact that I am happy with what I’m doing, and that is what I was searching for — happiness and satisfaction,” says Saraswati.