Our future is in the hands of our traditional food 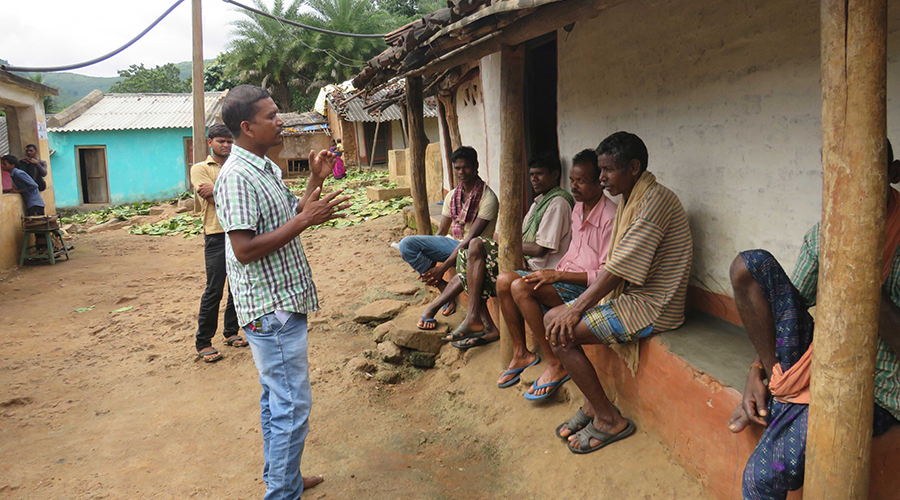 Our latest parinda, Jagannath Manjhi, is a tribal who lives in Odisha’s beautiful Niyamgiri Hills. These are the same Niyamgiri Hills which were going to be dug up for bauxite after the government decided to give a contract for the same to a multi-national corporation called Vedanta Limited. If this plan had gone ahead, it would have endangered and displaced tribals from at least 400 villages on the hills. So far, the tribals of Niyamgiris have been successful in their struggle to save the hills, the forests and the rivers in the region.

However, after the corporate giants had to bow down in front of the tribals, the former devised a plan to launch an indirect attack on the tribes. The agenda of this plan was to create a distance between the tribals from their culture, their land and their forests to weaken the community and their ideologies in an effort to push them out of their forests.When Manjhi sensed this danger, he became determined to find a solution to safeguard his community’s identity and its culture. He recalls that the government first approached their land six years ago, and since then Manjhi has been tensed and uncomfortable about the government interference in their region.

“A few years ago, I met Debajit Sarangi through an organisation called Living Farm that works towards protecting forest food. He offered me an opportunity to work with him. While working with him, I realised that the tribal land situation is so huge and ghastly that I cannot do anything alone. I understood that I couldn’t do anything to protect our land without the support of the community. And that’s when I officially associated myself with Living Farm, and started visiting villages to inform the local communities about this looming danger. We created awareness about the importance of locally available food, the diversity of our jungles and the need to protect them. By discussions on how we should protect our locally available food, we learnt how we can preserve the dignity of our society, and save our jungles and our land from danger. We also frequently organised training workshops for tribals to educate them about how they could conserve various seeds,” Manjhi says.

Tribals in the area have been successful once in protecting their jungles from urban hunters (corporates), however they remain unaware of the many other dangers that were looming over their heads. The start of this danger was with the establishment of formal schools in villages.
“I’m not saying that education is a bad thing,” Manjhi says. “But education should be such that a person is able to learn about his immediate surroundings and is able to mould oneself into the environment and earn a livelihood from it. What the point for an education that distances you from your own culture and land — which is revered as your mother. Modern schools are like arms factory that can only destroy things.”
“Formal education has started to turn tribals into slaves, at least mentally. The establishment wants to make us ‘educated’ but there is not even a mention about our culture or our knowledge that has been collected over thousands of years. Modern education has been trying to tell us that we’re ‘backward’ and ‘poor’ because we don’t have money. I want to ask people, who agree with this, what is the definition of being poor?” he asks.

On one hand are people who spend their lives as servants of somebody to earn money to buy their daily needs. On the other hand are people who fulfill their needs with resources naturally available in their surroundings, without even harming the environment.
“You tell me, who’s more educated? Those who don’t know how to grow their own food, build their own houses, weave their own clothes or provide natural treatment? Or those who have the talent and knowledge to live their lives on their own? Are those who study and talk about adding poison to food more educated or those who grow food in their surroundings using traditional methods and no chemicals? If you’ll speak to our elders, you’ll know that there are no traces of malnutrition, cancer or diabetes in our tribes. These are all modern diseases. This is because all the nutrition that our body needs to keep us healthy is easily available in our immediate surroundings,” he adds.
Further, Majhi stresses, that through these “temples of education”, the establishment is only trying to take away our talent and our knowledge. If, and when, this talent and knowledge is erased from our community, we will turn into slaves. And that is why we’re working towards protecting our forest produce. If we can save our forest food from the web of modern development, then we won’t be forced to become anyone’s slaves.

In the end, Manjhi just had a message for city dwellers:  You need to erase the perception that we’re backward or poor. Your existence depends on our existence and our knowledge. If there won’t be any tribal, then even the urban folks will not be able to survive for too long because one needs real talent and authentic knowledge to stay alive — and these are something that tribes hold.